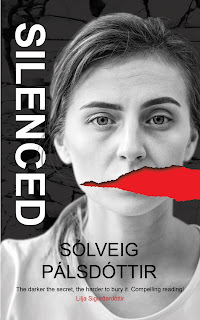 I'm grateful to Corylus Books for providing me with a free advance copy of Silenced to consider for review - and for inviting me to join the book's blogtour.

Silenced follows The Fox, in which we met Guðgeir Fransson, a detective with the Reykjavík police who was under a cloud and waiting for a decision on the future of his career (and also, his marriage). Now Guðgeir is back in Reykjavík and while he's not got his old job back (that role is held by his former protégé Særós) he is playing a useful part in investigations, at the same time as he and his wife move from a house that clearly holds painful memories.

That move brings Guðgeir across the path of Andrea Eythórsdóttir, a young social media influencer (I really enjoyed seeing Guðgeir grapple with that idea!) whose brother vanished twenty years before. Andrea is pretty traumatised by the whole thing and taking to the bottle, and Guðgeir begins to look into the case. He has barely got started however when he's called away to investigate the apparent suicide, in prison, of another young woman - swiftly followed by the first in a series of particularly brutal rapes.

Silenced has, as you'll have gathered, some dark themes. Like The Fox, it exposes patriarchal violence against, and control of, women and a content warning would be in order for the book since there are some frank (though not gratuitous) accounts of what happens. Pálsdóttir expertly weaves together a number of strands: Andrea, who as I have said, is herself troubled; her somewhat haughty family; Kristín, the young woman who died in prison and whose earlier life is seen both in flashbacks and in the words of a friend; and Guðgeir's own life, back on track but about to be upset when his student daughter announces that she is pregnant. I liked the way that Pálsdóttir then has Guðgeir reflect on that - on the extent to which the boyfriend may or may not become involved in parenting, on the childhoods and life chances of the people he meets as part of the investigation, especially the Eythórsdóttir children, and on his own earlier life. There's a sense of Iceland being a small place where paths cross often with different characters having attended the same college at different times, for example, as well as that closeness still allowing goodness knows what to happen in some families, unsuspected by those outside.

In contrast to all this exploration of human nature, I also enjoyed the sense of Guðgeir settling back into a familiar place, in contrast to his life as seen in The Fox where he was out of his element.

Which only makes it all the more disturbing, of course, when the attacks on women begin to mount and the team need to react and track down the perpetrator. That procedural aspect of the story makes this also an excellent book if seen primarily as a mystery (I did work out what was happening before the end) and I like the fact that, while dealing with very serious crimes, neither this book nor its predecessor give the centrality to murder that one so often finds in crime.

The translation by Quentin Bates is clear and strikes a good balance between keeping the setting and atmosphere clear - this is obviously Iceland! - and leaving the reader to puzzle over details or references with which they may be unfamiliar.

An excellent addition to a series that I am looking forward to following.

Sólveig Pálsdóttir trained as an actor and has a background in the theatre, television and radio. In a second career she studied for degrees in literature and education, and has taught literature and linguistics, drama and public speaking, and has produced both radio programming and managed cultural events.

Her first novel appeared in Iceland in 2012 and went straight to the country’s bestseller list. She has written five novels featuring Reykjavík detective Guðgeir Fransson and a memoir, Klettaborgin, which was a 2020 hit in Iceland.

For more information about Silenced, see the publisher's website here (including buy links) and the stops on the blogtour, listed on the poster below.

You can also buy Silenced from your local bookshop, or online from Blackwell's, Foyles, Waterstones or Amazon. 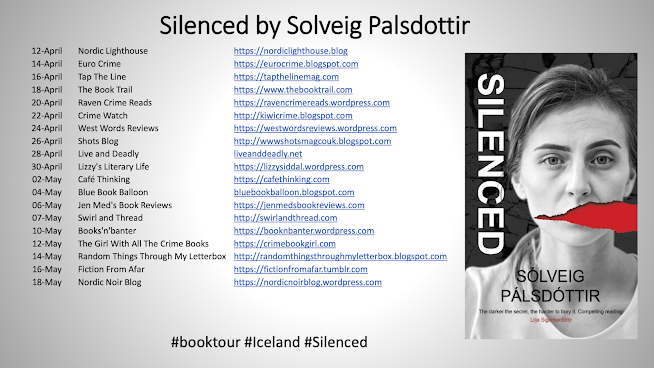