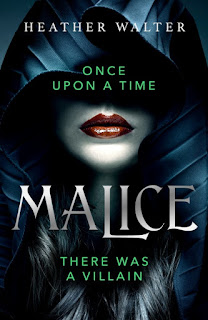 I'm so grateful to the publisher for an advance copy of Malice via NetGalley.
Alyce is her name.
Malyce is what she's called...
The young woman who is the hero of this book strives throughout not to be the villain. Not to be seen as the villain. An outcast with no mother, half human, half Vila - a legendary race of dark Fae, now believed extinct - she's the subject of a daring experiment. In the kingdom of Briar, there are houses where Graces - young women touched with the magic of the Fae - sell gifts of beauty, wisdom, healing and wonder, all powered by drops of their precious, golden blood.
What might one do with the green blood of a Vila?
Enter the Dark Grace, groomed and trained for her role. Hated and feared, yet so, so, needed... for those times when a little curse is called for. When a love rival needs to be stopped. When a life needs to be ended. Shunned, yet patronised, Alyce sits in her dark, damp little room in Lavender House and serves her clients. Anonymous clients, cloaked and hooded, yet willing to pay out large amounts of coin for what she can offer. Even the King, one day, will need something from her.
This book is deliciously, subtly constructed. One's sympathies are with Alyce from the start. Even as she begins to discover more about who she is, and to learn the extent of her powers, she doesn't seek power or revenge. Her occasional rages are, we might think, understandable. Rather, she is - unknowingly - looking for love. This poor lonely girl, humiliated when she attempts to attend a Royal ball, has a deep need she isn't even aware of herself. This takes the book to one of the most frustrating, will-they, won't-they romantic plot threads I've read for a long time. No spoilers, but sometimes you just know when two characters are right for each other and that they should just get on with things...
Alyce's origin is deeply bound with the history of the Fae and the Vila, and the origins of Briar. Briar is a troubled realm, where the founding (and ruling) Queens have lost their power to their husbands; where a curse threatens royal daughters unless they find a True Love; where an enemy is imprisoned in a dark tower, waiting an opportunity; where spies watch from the shadows. If Alyce learns the truth, it may, you think, set her free. That's what she hopes. But can she ever be free when what she does, what she is, is so useful, so darkly useful, to the wealthy and powerful?
There are so many layers here. History gone bad. Injustice and genocide. The fate of an individual taking second place to the demands of the State. Also, power, freedom and revenge. Alyce is a magnificent hero, even if all around her - even those she thinks of as friends - would paint her as a villain. The book is described as being "Sleeping Beauty" from the villain's point of view, but it's so much more than that. To begin with, it's an origin story for Sleeping Beauty. All the elements are there, even if in unfamiliar form, and even if Walter also plays with references and hints of other fairy stories (I spotted several) but they don't come together in quite the way you might expect. But it's also a story about patriarchy. About finding oneself - and the deadly consequences of being forced into denying that self.
A riveting book, exuberant, joyful and angry, this was an entrancing and involving read and I enjoyed every word of it.
For more information about Malice, see the publisher's website here.
Email ThisBlogThis!Share to TwitterShare to FacebookShare to Pinterest
Labels: 2021, dark fairy tales, fairy tales, Fantasy, magic, romance