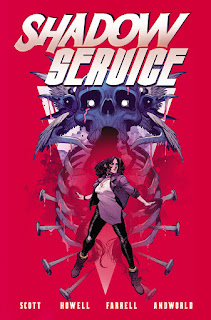 Shadow Service, Volume 1
Cavan Scott (Writer), Corin Howell (Artist), Triona Farrell (Colourist), Andworld Design (Letterer)
Vault Comics, 20 April 2021
Available as: PB, 128pp
Source: e-copy via Netgalley
ISBN: 978-1939424815
I'm grateful to the author and publishers for an advance preview of this collected volume of Shadow Service, which I'd been following as the separate parts were published. I don't often review comics on here - my mind runs on verbal rather than visual lines and I find it hard to do them justice - but this is one that really deserves some attention, so I will do my best!
This volume collects issues 1-5 of Shadow Service, introducing Gina Meyer, private investigator and witch. Gina walks the mean streets of London, where her speciality is finding the lost. The opening panels see her alone in the moody streets, before getting involved in a fight in some dive... but they also introduce a sense of pervasive surveillance when we realise that somebody is watching Gina.
That early fight leads into pretty much non-stop action, as you'd expect with Gina discovering that her apparently straightforward occupation has led to her becoming involved in a complex and fraught battle touching on organised crime, demonic powers and blackmail - and that a department of Government, nicknamed MI666, are also players here. (I loved that fact that their HQ was in "Carnacki House").
The story operates on two timelines, jumping back (mainly at the start of each issue, if you are reading them that way) to show Gina's earlier life and how she came to be a witch. Or perhaps I should say, how her powers manifested - because she states that they were always there, as words in her mind, words she learned to deploy as weapons or tools but never understood before that. Hers is a powerful and raw emotional backstory which explains why she is something of a loner (she has one friend - the talking rat called Edgar, though he may not be quite what we imagine). That accounts, I think, for Gina's reluctance to sign up with the spooks once they reel her in - though she is impressed by their powers and resources, she definitely doesn't trust them and prefers to do things her own way. It's only going to lead to trouble, I think.
Overall, a turbulent, twisty story which covers a lot of ground. Gina is a determined and resourceful protagonist who perhaps acts a little impulsively but whose heart is in the right place but there is a mystery about her true nature.
The overall visual tone of Shadow Service is sombre - it's often night time, the story dwelling on scruffy alleyways, empty offices, bars and gyms whose greyness often ends overwritten with blood and gore. Allies here are provisional, and sometimes the best way forward is to offer up one's very soul for trade...
At the time of writing I hadn't seen Issue 6, which leads into a new story arc, and I have to say, I am very impatient for that - here's hoping that with lockdown lifting I can get back to favourite comic shop and pick that up!