#Blogtour #Review - Whisper Down the Lane by Clay McLeod Chapman 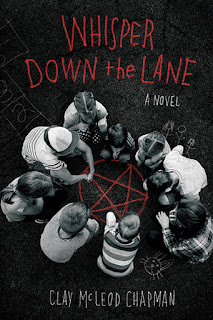 Whisper Down the Lane
Clay McLeod Chapman
Quirk Books (distributed by Penguin Random House), 6 April 2021
Available as: HB, 320pp
Source: Advance copy kindly supplied by the publisher
ISBN(HB): 9781683692157
I'm grateful to the publisher and to Stephen and Jamie at Black Crow PR for an ARC of Whisper Down the Lane to consider for review, and for inviting me to take part in the book's blogtour.
1983. Five year old Sean is an outsider, a scholarship boy with a single (and hard-up) mother. Bullied at school, he's anxious to please,  desperate in fact to work out what the adults want of him and to give it to them. No match for a manipulative storm of accusations, quack therapists and - as is soon clear - self-righteous witch hunters wedded to increasingly bizarre and heinous conspiracy theories. Sean's compliance with all this will destroy his world, consume the innocent and mark him for life.
2013. Elementary school art teacher Richard has married "office Goth" Tamara and is on course to adopt her son, Eli. Then a horrible crime is committed, and he begins to feel targeted by someone who knows far more than they ought to about his past. Increasingly paranoid, Richard sees things go from bad to worse and realises that events are repeating themselves.
I should start this review with a warning - the book features a couple of nasty instances of cruelty to animals, one of them right at the beginning.
It introduces the reader to a series of events I was unfamiliar with - a moral panic in the early 80s USA when accusations of improbable and bizarre ritual practices were levelled at respectable members of the community . Stirred up by dubious therapists and members of fringe quasi Christian organisations, a feverish atmosphere of conspiracy built up. I would like to say this was a one-off, but it's clear from history (and more recent events) that apparently rational people can be moved to such nonsense when the conditions are right.
In transcripts of interviews with the young boy Sean, we see how suggestions are planted and how a lonely and confused boy is made to support pretty much whatever his interrogator wishes. And we see tragic consequences from that. Cutting between 1983 and 2013, we also see Richard, who has rebuilt his life and erased Sean, being reminded - as he goes about his daily business with Eli, Tamara and the kids in his class - of what happened before.
It's very subtlely done, with the reader unclear whether some of the events might be coincidences that Richard's working into a pattern; whether he might be being targeted (but how and by whom?), whether he is, in those moments of "vacancy", himself acting out what Sean claimed to have seen, whether there is a real element of the supernatural here - or whether something else altogether is going on.
There are also hints that the febrile atmosphere of the 80s could return (the school renaming Hallowe'en "Character Day", for example) and social tensions: Danvers is rapidly gentrifying, with a consciously hip demographic moving in, but some of the residents are still "old Danvers", liable to be swayed by anti gun-control conspiracy theories - and Tamara must be careful to keep her tattoos hidden from both pupils and the Principal.
And over all, a profound sense of unease, of his personality having been wounded and not healed after being forced to bear the responsibility for the consequences of things done by adults. I actually got angry at what had happened to Sean (as well as to others here). W B Yeat's poem "The Second Coming" is often quoted in connection with the working out of the perplexing and frightening events of the modern age and two verses in particular are well known -
"Things fall apart; the centre cannot hold;
Mere anarchy is loosed upon the world"
For me, though, it's the following words which chime perfectly with the atmosphere of Whisper Down the Lane
"The blood-dimmed tide is loosed, and everywhere
The ceremony of innocence is drowned"
The book seems to me to, scarily and perfectly, capture the childish (ie immature, self-indulgent and shallow) as opposed to child-like (innocent, accepting and open) behaviour of certain adults who, unempathatic and lacking self-knowledge, refuse to shoulder their own responsibilities or to truly protect those for whom they are responsible. That makes Whisper Down the Lane a hard read, at times. There were points when I had to stop to gather myself before reading what I feared might come next. Clay McLeod Chapman does though draw the reader in and there was no way that I could not go on with this book, to discover whether Sean - and Richard - would eventually find peace with themselves.
It's traumatic at times but I would strongly recommend.
For more information about the book, see the other stops on the tour (listed in the poster below) and also the Quirk website here. You can buy the book in the UK from your local bookshop (bookshops in England will be open again next week), or online from Bookshop, Hive Books, Blackwell's, Foyles, WH Smith, Waterstones or Amazon. 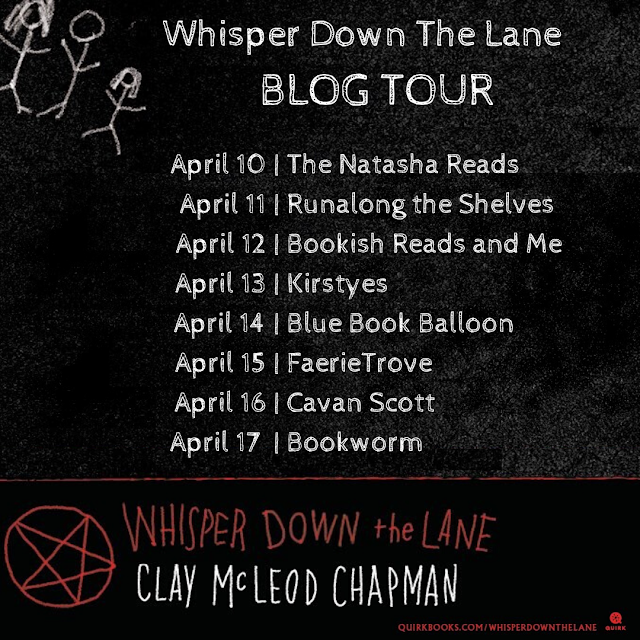