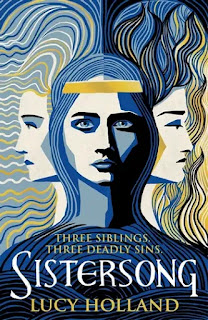 I'm grateful to the publisher for an advance copy of Sistersong and to Jamie and Stephen for inviting me to take part in the book's blogtour.
Sistersong is a generously imagined and well told story rooted in the sub-Roman period, when Britain was no longer defended by the Empire but "England" had not yet formed. It's a story of family, love, revenge and treachery but above all I think a story of becoming what one is - and the costs doing that can accrue.
This period of this book is sometime described as the "dark ages" -  a term originally used because of the lack of contemporary written records, but which is now used less because on hearing it many imagine a time of barbarism and decay, which (as this book shows) it was not. It's also sometimes seen the "age of Arthur", a British leader defending his people against the invading Saxons. Again, though, the historical records are scant. But this is a setting that gives an author a great deal of room and Holland takes full advantage, placing this story in a definable place - the kingdom of Dumnonia, in what is now South West England - and associating it with real people (her King, Cador, his successor Contantine, and their Saxon opponents). To these she adds a conflict between the old religion of Celtic paganism and the new Christianity represented by the priest Gildas - also a real person, who wrote one of the few contemporary histories of Britain. (I loved the way that Gildas's actual habit of denouncing pretty much everybody in his writings carries through to acrimonious relationships with nearly everyone else here.)
The main focus of Sistersong is though not on the historical characters but on the fictional Riva, Keyne and Sinne. Cador's three children are vividly portrayed and only too plausible. The story is told from their viewpoints, Holland switching between them - shifts which sometimes preserve the flow of events, sometimes deliberately jar them, but which always illuminate, showing an event from two or even three perspectives as well as giving the reader a fuller picture than any of the characters here
Of the three, Riva and Sinne are the "twa sisters" of the traditional murder ballad which, as as Holland has explained, was the inspiration for the book: Keyne is the one the ballad left out, for reasons which become clear. It's the relationships between them which really drive the story, each wanting something different.
One seeks love and adventure.
Another, injured and (as she sees it) disfigured in a fire as a child, retreats into books and her magical talent for healing, but deep inside, may yearn for other things.
The third would lead, but is in a society where that seems unlikely, and fears that society seems likely to impose.
The ups and downs of their relationships both affect and illuminate the wider political events - war, invasion, religious conflict and the loss of magic - which will determine the future of Dumnonia and, later, of the Anglo-Saxon kingdoms which will become England.
I loved the way that in this book, Holland foregrounds the struggles of the three relatable (if at times frustrating) young people who are doing their "growing ups" just as the tides of history lap the walls of their hill-fort.  Both sides of the story are urgent, and nobody really understands what is going. We, as privileged 21st century readers, may imagine we do - but we don't. It may be tempting to assume that because we know how things turned out eventually, we understand everything. But no. This is such an unknown period, and Holland so cleverly brings in different factors (I don't want to do spoilers!) that nothing is certain except love, change, and loss. Personal loss as childhood familiarity gives way to new battle lines: wider loss as the old ways are challenged. But not without a fight!
I just loved this book, which portrays a complex historical situation without giving way to the tendency to paint heroes and villains (if there were a villain in this book, it might be Gildas who perhaps appears at times as a slightly monomaniacal person - though once the full truth about him is made known, the reader may slightly revise this point of view). There are nods to what people will recall of the Arthurian stories (especially with one character) but this isn't an attempt to "retell" those - Holland instead creates a world here with echoes in history and in other sources, but which is fully her own.
Overall, a compelling story filled with magic, romance,  and adventure and with some contemporary resonances.
For more information about Sistersong, see the blogtour stops on the poster below - or the publisher's website here. You can buy the book from your local shop (in England you'll be able to go in person next week!) or online from Bookshop, from Hive Books, Blackwell's, Foyles, WH Smith, Waterstones or Amazon. 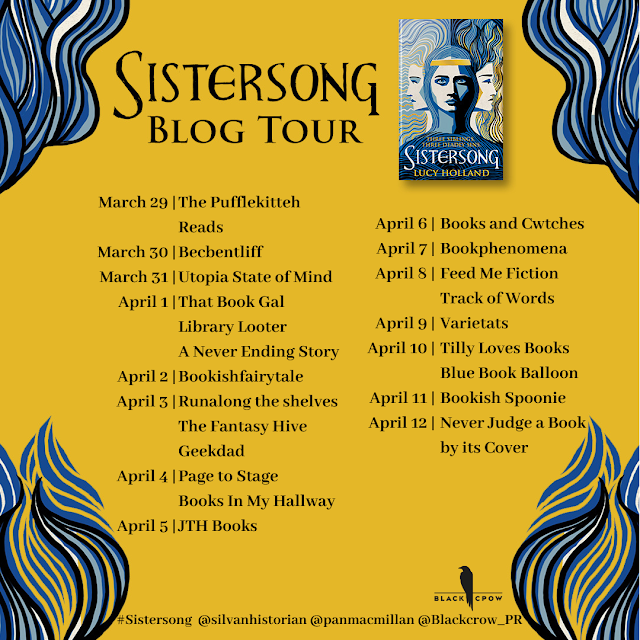