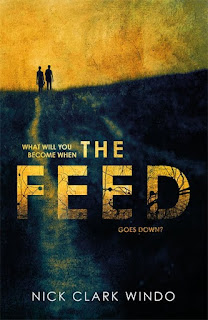 Today I'm joining the blogtour for Nick Clark Windo's excellent new novel, The Feed. I'm grateful to the publisher for an advance copy of this book. (In fact a signed, numbered advance copy).

In a scene towards the beginning of this book (which is set, I think, several hundred years into the future), a young couple, Tom and Kate, try to have a meal in a restaurant without using The Feed, a futuristic, immersive, form of social media that allows one to directly experience others' emotions. They are "going slow": augmented by The Feed, the mind can absorb and process enormous amounts of data in vanishingly short times so it's a novelty to experience reality without it.

Kate can't, in the end, resist visiting her "Pool" to "gulp" The Feed and see how her millions of followers have voted in the poll she is running ("What would you be prepared to give up...?") This angers Tom who is concerned that people are becoming addicted. Clark Windo's depiction of Kate's experience is brilliant and unsettling, sort of like having the whole of Twitter poured over your head at once.

Kate and Tom's situation will be familiar situation for many, I think: I certainly recognised myself Tweeting away in a restaurant. Those little reward spikes from social media can be so compulsive... but at least when we "go slow", we still experience the world in vivid colour, full sound and as information-rich. In Tom and Kate's world, there are no written words anymore, only barcodes. No speech or communication, other than through The Feed. When they drop out they are in a drab, quiet place with all the virtual layers stripped away. Nobody bothers with the physical world, it's like the back of the set in a theatre. So Tom's suspicions seem to be justified.

His point is then borne out in spades when in a time of conflict and attack by mysterious outside forces ("The Others") The Feed collapses. Humanity is left prostrate - having come to depend on it for the simplest of tasks, they lack all basic knowledge - and hundreds of millions die of starvation. There isn't even a minimal level of understanding  to be gleaned from books: nobody bar a few Resisters can read anymore as The Feed handled information so much more directly.

I found this vision oddly refreshing. There is a danger in post-apocalyptic fiction - which this clearly is - that the story almost glories in the Survivors, in their competence at scavenging what they need from the ruins, in their cleverness at building generators or growing food, in their victories over other groups (necessary because if they were defeated the story would end). It only takes a few missteps by an author for this to get rather troubling.

Nick Clark Windo avoids this danger because his setup, by design, makes the survivors into weak, incompetent things. They don't know how to scavenge. They are helpless, defenceless, having to learn it all from scratch and from bits of passed-down lore. Even the names of towns seem to have been lost, with only one given, and that only drawn from the past: we never know exactly where the story is taking place. All this makes the story much less a survivalist wet dream and much more a human experience, foregrounding the relationships, especially that between Tom and Kate.

Not that there isn't jeopardy. Aside form daily, practical dangers, the intrusion that destroyed civilization - The Others - is still active, or thought to be so. Paranoia coils about everything and everyone. Might The Others be among us, posing as friends, as sisters, brothers or children? The lengths the survivors go to in their fear of this are pretty shocking. It's a frazzled, stuttering life they lead, threatened from moment to moment - and it doesn't help that the tantalising technology which has been snatched away offered the possibility of endless life, of backups stored from moment to moment, so that all those who died may be archived away, if only the machines still worked. A bitter thought to set against the day-to-day struggle for existence.

There are obvious comparisons to be drawn between this story and EM Forster's The Machine Stops. Forster foresees the dominance of social media, the attractions of a mediated life. His story ends, though, at the moment that his cloistered humans are forced to leave their sheltered pods to live in the real world. It will not go well for them, one thinks, and in a sense Nick Clark Windo's story is a sequel, showing just how bad things can get.

He does, in the end, offer a degree of hope at least for Tom and Kate. That's probably necessary in a book that follows them in such a hard struggle, but even so, the hope they find is a bitter one, after loss.

This book is compulsive, if at times disturbing, focussing on two characters who have been hardened by six years living amid the ruins of modern society. They fight hard to preserve their family, against appalling odds and their relationship is tender and well drawn.

I really enjoyed it, I think you will too. 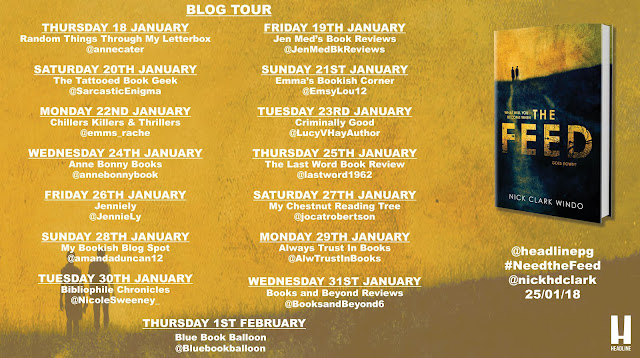