I'm grateful to the publisher for a copy of this book and for inviting me to take part in the blogtour.

Aaron Falk is back!

Falk, introduced in Harper's debut The Dry last year, is a Federal Agent in Australia, assigned to investigate financial crime. In The Dry he was visiting his hometown for a funeral and became embroiled in a series of events entangled with his own past, taking him to areas of criminality a long way from his normal work

In Force of Nature, Falk is on safer ground and he has more distance, although the story still prompts him to reflect on his damaged relationship with his father. He is working one of his own cases (with his partner Carmen), investigating a money laundering racket at the centre of which is an apparently respectable family business.

Falk's and Carmen's bosses are desperate that they provide the documentation necessary to take down the money laundering gang. But there is a problem. They have recruited an informant in the firm - but now Alice has gone missing. Five women - Bree, Beth, Jill, Lauren and Alice - went into the woods on a corporate team building weekend - but only four came out.

It is imperative that you get the contracts...

OK, but just how do you do that when your contact has gone missing in the forest? The pressure is on, and Falk and Carmen head out into the bush to join the search team and attempt to understand what happened during the 4 day hike. Did the group simply suffer misfortune, or was Alice exposed by her bosses? Or did something else happen?

While The Dry was set amidst the scorching heat and baking drought of an Australian summer, Force of Nature takes place in the winter. When the five women go astray their  enemies are not thirst and fire but cold, wet and hunger.

As things go from bad to worse, tensions between the women rise. They all have secrets, and some of them have good reason to want out of the group. Harper tells the story in alternating chapters first following Aaron and Carmen and then jumping back to the women in the forest, leading up to catastrophe. This is a formidable device for building tension, drip feeding enough information that we are aware, just in time, of the significance of something the detectives discover or of the wider impact of an apparently minor quarrel or argument among the five.

Among the alarming facts that comes out is that the woods were previously the domain of a killer, at least one of whose victims was never found. And he had a son and apprentice. So when the missing women stumble upon a sinister cabin in the woods, we wonder where things are going...

The characterisation of the women is particularly good, especially the sisters Beth and Bree, who carry different loads of guilt which affect their behaviour on the calamitous hike. Alice herself remains an enigma: even when she's with the others she seems only part there - we eventually learn the reason for this, as secrets are revealed and scores settled.

Overall, a suspenseful, intelligent psychological crime novel with no girls, no trains but a heck of a lot of tension. As good as or better than The Dry although clearly a more conventional crime thriller with Falk less personally involved in the case. It will keep you guessing till the very end. 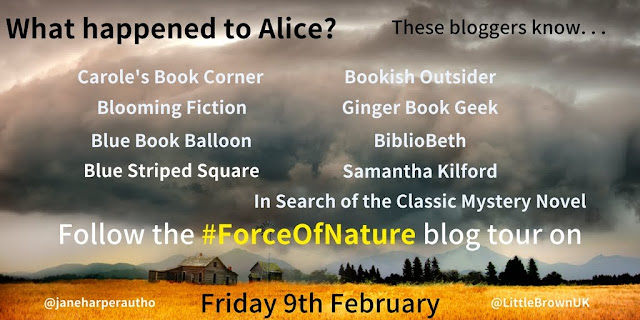