Review - The Toymakers by Robert Dinsdale 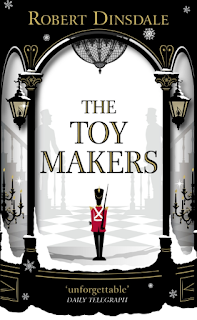 It is 1917, and while war wages across Europe, in the heart of London, there is a place of hope and enchantment.

The Emporium sells toys that capture the imagination of children and adults alike: patchwork dogs that seem alive, toy boxes that are bigger on the inside, soldiers that can fight battles of their own. Into this family business comes young Cathy Wray, running away from a shameful past. The Emporium takes her in, makes her one of its own.

This book will always remind me of winter. It's not just that so much of it is set in the wintry time between First Frost and the budding of the snowdrop, the magical time when the doors of the Emporium - Papa Jack's Emporium, the most magical toyshop in all London - are open.

Nor is it because I read it on a weekend break in snowy Reykjavik.

No, it's more that Dinsdale has somehow captured the essence of winter in the frozen lives, the frozen hearts - for much of the novel - of his characters. So much so, that as the book continues one aches for the spring, the thaw, the warm sun.

The story proper opens with a young woman, Cathy, who has fallen pregnant. In the judgemental atmosphere of 1906, she must be made to suffer, and she is to give the child up ("They brought her down to Dovercourt to sell her child"). Running away to London she heads for - where else? The Emporium, where she takes a job as a shop assistant.

Dinsdale is at its best conjuring - I use the word advisedly! - the atmosphere of the Emporium in all its pomp. Of course, a bustling, thronged toyshop in the Christmas season lends itself to being portrayed as a hive of wonders, so perhaps he's going with the grain, but even so, we get a glimpse of something almost magical in the glimpse of the brightly lit shop, hidden away at the end of Iron Duke Mews, so much so that it's easy to believe stepping inside takes you a little way out of this world.

Yet this glimpse - seen in the prologue, and again in the opening of the novel proper - has to sustain us, and Dinsdale's protagonists, through a long, hard winter, one that we suspect they may not all survive. Life is precarious, and the Emporium, despite appearances, is not a haven from the outside world. Cathy has run away and has, in her pregnancy, a secret that could destroy her hard-won security. Kaspar and Emil, the two Godson boys who work with Papa Jack, are rivals in all sorts of ways. Jack is himself a refugee from hard times in the East - his life history explored in one particularly moving sequence where he dramatises what happened to him through a magical, immersive wind-up toy.

And looming over all there is, of course, the backward shadow of the future - looming war which will consume the shop hands and the comfortable life of the Emporium, bring division and pain, and break hearts.

It is, then, in many respects a very dark story that Dinsdale tells. Like Jack, he portrays his themes through the medium of toys - mainly, the evolving lives of the wooden, clockworks soldiers made by Emil, with perhaps a hint of Papa Jack's magic, models which learn, and teach, lessons about freedom, restraint and endurance. But there's also the windup patchwork dog, Sirius who, in the manner of dogs, is fiercely loyal yet may bring you to tears.

It is, then, a magical story in so many ways - in theme but also in form. Like the Emporium itself, Dinsdale presents something that is bigger on the inside (I wondered whether the echo of Doctor Who was conscious, and I'm still not sure, but it is very appropriate). Like one of Papa Jack's miraculous paper models, it unfolds to show love, persistence, rivalry, despair and how the passing of the years dilutes and refines these. Far from a Peter Pan or a Wind in the Willows, fine books which nonetheless present an idealised summer preserved for ever, The Toymakers focusses on the winter, and as the seasons turn things do change. Children do grow up and some of them can turn out very bad. But at the core of the book is Papa Jack's belief in the power of a memory of childhood (emphatically not its indefinite prolongation, nor taking refuge in it) which can be redemptive in even the darkest moments.

Often a hard book to read, but nevertheless uplifting, even joyous at times and imbued with a deep optimism.

A gorgeous book. You want to read this, you really do.