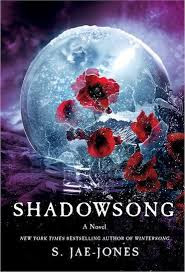 I'm grateful to Lydia at Titan Books for an advance copy of Shadowsong.

I'd been keenly awaiting this sequel to Jae-Jones's Wintersong published last year, a book which got me through a very wet business trip to Manchester (sorry to be so cliched about Manchester).

My first thoughts on having read the book were though that Shadowsong is really quite different - which isn't a bad thing, but one that has taken me some time to process. In Wintersong, Liesl, a young woman living in a vaguely drawn central Europe, falls in love with the Goblin King. The story is about the tension between this dark love and her human side, and also about the implications - for Liesl and for the world - of her fully committing either way. Framed by Christina Rossetti's poem Goblin Market, it is a story which is I think deeply Romantic, (in the sense of Romantic music or poetry, not of being about love and romance although obviously it is that too: aaargh words!)

The effect on others close to Liesl matters too, particularly her family, but the wider world is irrelevant, indeed the story could really be taking place in a fantasy landscape. It is a journey into Liesl, into the ground, into the deep Goblin realm, a country of illusion, earth and wildness which has so may secrets secrets - there are references to the Old Law, which binds what can happen there and which Liesl will flout at her peril. And to a degree, she brings this wildness back with her to the human world - but until almost the closing scene that world means just her remote village and the Inn that her mother keeps.

It is a seductive, bittersweet and enticing story.

At the end of Wintersong, Liesl's brother Josef had been taken on as a pupil of Master Antonius and was making his career in music, playing in the great capitals. But we soon see in Shadowsong that all is not well with Josef, and when Liesl learns what has happened she wants - needs - to help him. So she leaves the isolated village and steps into the real world.

There the consequences of what she's been become - the Goblin Queen, no less - still follow, and the supernatural is certainly at her footsteps, but we also have, as I said, a human dimension and we're in a world of mysterious castles, masked balls and pell-mell journeys in blacked out coaches. It is, to repeat, very Gothic in mood and to reinforce that, the supernatural elements are more menacing, less natural. The Wild Hunt rides, and death will surely follow.

Amidst all this danger and magic, we're able to trust no-one. There are factions here, and how they relate to one another is obscure until almost the end, as are the stakes involved in the game. Liesl is on unfamiliar ground, she doesn't know what the rules are, and her ally and lover, der Erlkonig, is part of what menaces her.

This is a very dark story indeed. When I describe it as Gothic rather than Romantic I don't mean it's all about locked attic rooms and suits of armour: Liesl's struggle in this book is still very much with herself. Despite having companions on her quest she is in many ways more alone, more isolated, in this book than she was in the previous one - even if she is out in the wider world. Her vulnerabilities are exposed and the roots of her relationship with Der Erlkonig, with Josef, with her sister, subject to a withering frost of emotion - self-doubt, guilt, deception and fear. As the author notes  at the beginning there are some vary dark themes here (and do read that note before you read the book).

All in all, while Wintersong was the book for me on that rainy night in Manchester, Shadowing is darker and might perhaps be better read on a sunny afternoon - but it's no less captivating, no less enthralling, no less magical than the previous book.