Blood of Assassins by RJ Barker 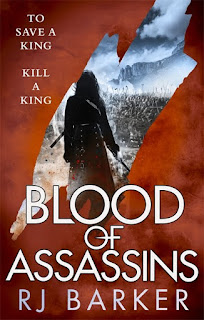 In this sequel to Age of Assassins, published last year, Barker takes us back to Maniyadoc and the Long Tides, the Wounded Kingdom where outbreaks of magic leave patches of land "soured", yellow and unproductive - and where the sorcerers who produce them are despised, hunted and tortured.

Girton Club-Foot and his Master, Merala, left the Kingdom years before after Girton's friend Rufra seized the throne. Declared outcast by the Assassins, they have a price on their heads and have been surviving as mercenaries. Stuff happens in life - but this stuff has left Girton filled with guilt and even hate. We only gradually find out what he's done, or refrained from doing, and why it matters so much.

Things haven't all gone well for Rufra either. Fighting a war against two other pretenders - Tomas and Aydor - he has been trying at the same time to build a better Kingdom, one more equal, less cruel while suffering personal tragedy and missing his friend. And Maniyadoc is still beset by the baleful Landsmen who persecute sorcerers - Rufra needs their support. More, he sees their cruelty as a regrettable necessity.

The Kingdom is also riven by priests of the various Dead Gods, self-proclaimed prophets, and all manner of chancers and aggrieved grudge-bearers.

Into this poisonous ferment Girton brings his own darkness. He is, as readers of Age of Assassins will remember, a sorcerer himself, or at least, magic is trying to work through him, though he suppresses it as best he can (a cause of bitterness between him and his Master). Set to track down a spy and expose a murderer, Girton finds himself at the centre of events again and forced to make some very, very hard choices. "Oh Girton" I found myself thinking more than once "you've done it now..."

If that shows I'm getting dangerously close to Girton, so be it. A flawed, often frustrating hero he's nonetheless likeable. In Age of Assassins we saw him come of age... to a degree.  Here he's perhaps more like a grown up child who hasn't broken away from his mother - and yes, the bond between him and Merala is close to that between parent and child, although I don't think they are. One feels his frustration, rage and love even as he does some ghastly things, and one fears for his future. We meet another assassin here whose Master is buried in a ditch. Is that the path Girton's set to follow?

The book does focus on various ways in which paths are set or can be chosen, the moment when a man or woman's fate is sealed, when something happens - willed or no - that shuts down the choices. It also dangles the possibility of redemption, of turning away from a bad path and finding a better one. Perhaps. But can we trust those who say they are doing this? Is it even possible when the land is drenched in bloodshed, war and loss?

If that sounds very dark, well, Blood of Assassins often is dark, be warned. It's not, though, a dark read. I mean that even where the subject matter becomes grim, the book continues to draw the reader in through the inventiveness of the writing, the substance of the characters, the delightful reality of the setting, all of which make it a joy to read. Barker has a knack of making everything so convincing, whether it's the vengeful hedgings, chaotic spirits glimpsed in dreams (Blue Watta, Coil the Yellower and so on), the combat, (Girton uses a whole - I assume invented - technical language to describe his assassin moves, making them sound almost like dance), the sense of powers brooding just behind reality (Girton's struggle to suppress his magic, the looming storm of Yearsbirth, the sense that if the gods really are dead they may not stay that way).

And if that weren't enough, Barker's book is almost uncannily timely. I don't want to spoil the plot, but an element that does come out is the presence of a sexual predator who has been tolerated because he's useful. Everyone, it turns out, knew about this person: even in a world where men and women are found equally in the shieldwall, serve equally as bodyguards, as cavalry, priests... or assassins... this phenomenon persists. Like the blood sacrifice by the Landsmen, it's accepted, worked round, lived with, even in a Kingdom that Rufra says he wants to make better.

In keeping with that, victories here are hard gained and at a great cost to winner and loser. Crimes take place, and Girton is far from innocent himself: there are things he can't even tell his best friend, if he doesn't want to end up in a blood gibbet. It all makes for an introspective, guilt-ridden hero - and for truly marvellous fantasy reading.

If there's any justice in the world, Barker's series is destined to be a classic of fantasy. I'm impatient for the third book, King of Assassins, to see how it all turns out - and meet Girton and Merala again, no doubt a few years older, perhaps a bit wiser, certainly no less prone to get into trouble.