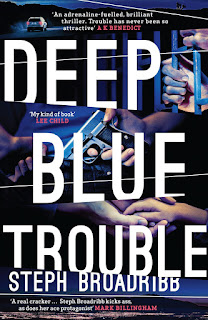 Broadribb's hero, single mother bounty hunter Lori Anderson, burst on the scene in 2017 in Deep Down Dead and her new adventure follows straight on from the frenetic chase across Florida described there.

I think I've fallen a little bit for Lori (but don't tell anyone) and couldn't wait to meet her again. Deep Blue Trouble offers that opportunity and, oh, WOW!

Lori has accepted a dubious deal offered by even more dubious FBI Agent Alex Monroe, in order to get JT, the father of her child, Dakota our of prison (and potentially, off Death Row). All she has to do is bring in escaped multiple murderer Gibson 'The Fish' Fletcher and dodge the footsoldiers of the Miami Mob who now suspect her of having killed her abusive husband, Mob enforcer Tommy.

Except... she must leave Dakota behind to do the job, she can't trust Monroe, someone's trying to kill JT in jail - and Lori begins to suspect that she's been fed a pack of lies about Gibson.

The story rapidly takes off, with Lori following Gibson to California, where she discovers further Mob entanglements and is ordered by Monroe to work with a team of local bounty hunters led by the hostile Dez McGregor. Between trying to work with the resentful and distrustful Dez, chasing down her own leads on Gibson, worrying about JT and Dakota and being shadowed by goodness knows who, Lori is often at her wits' end. But that's where Broadribb's awesome hero really shifts things up and fights back - one of the qualities that stood out about her in Deep Down Dead. Relying only on the precepts that JT gave her and on her own instinct, she never gives up, refuses to knuckle down to either Dez or to Monroe, and sticks a finger up at the Mob.

It's a tense, powerful ride from then on. The antagonists here will show no mercy and there's no saying how deep their reach goes. JT is assaulted in jail and at their mercy. They know that Lori has a child. Can she keep one step ahead and save those she loves?

One of the strengths of Broadribb's writing is that she doesn't pull some implausible stunt from up her sleeve and make everything come out right. There is a mass of plot and counter-plot here and a great deal will only be resolved in (I hope) another book. For now, Lori holds some cards, but so do others and we just have to wait to see how they fall.

All in all, an excellent, breathtaking crime thriller with a compelling central character (oh Lori!) and plenty of action. I didn't feel by the time I'd reached the end of the book that every twist had been explained, but that's fine because this story is still very much in motion.

I look forward to Book 3! 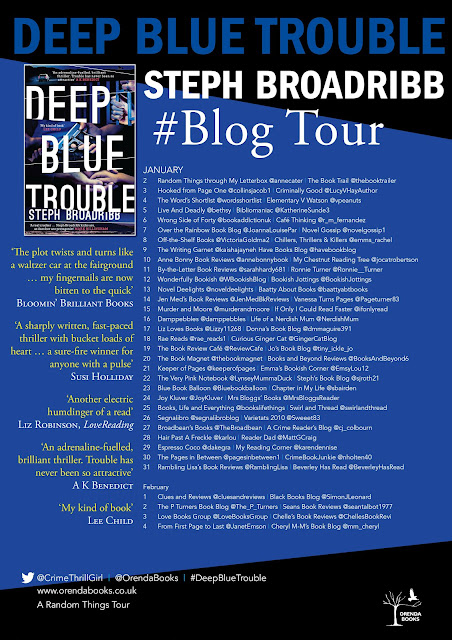