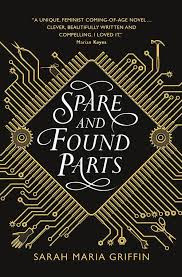 I'm grateful to Titan Books for an advance copy of Spare and Found Parts.

In an unnamed country, in Black Water City, Penelope - Nell - lives with her father, a maker of artificial limbs and body parts, which are much in demand in a future scourged by epidemics as a result of which many of the citizens are missing them.

In this post-apocalyptic future, all must "contribute" to society. The time for Nell's Contribution is fast approaching and she doesn't know what she will do. A skilled apprentice to her father, she hasn't settled on what to make - and time is running out. This sense of coming life, of young people wondering what their place in society will be, how the world will value them, where they fit in, what their tribe is, is palpable this book with plans being made, futures considered and accepted, bargained over, rejected, is palpable. With no social media, not even landline phones for anguished, hour long calls, it all happens out in the open. Secrets come to light.

And as Nell spends her days combing the detritus of what was evidently Dublin, her mechanical heart - designed by her father - ticking faster or slower to mark her level of excitement or fear, we also gradually learn more about what happened a hundred years ago, and why computers have been driven from the country (while not completely clear, this doesn't seem to be true elsewhere in the world: some of those youthful plans are dreams of leaving the island and connected with that banned culture: this seems a self-imposed internal exile).

We learn that there were there were electromagnetic pulses. That there was a destructive virus that seems not only to have consumed humans but to have eaten walls, ceilings, floors. It's not clear whether this is being blamed on the actions of the machines, or was done to, in some fashion, control or destroy them, but either way, they are treated as responsible.

So Nell's wakening desire to construct a sentient, mechanical man is a dangerous obsession. As the storm grows and lightning flashes, we are clearly somewhere in Frankenstein territory with the story a heady mixture of coming-of-age tale, warning, and ethical fable about the duty we owe to our creations.

It's a very driven story, seen largely through Nell's eyes (there are a few sections that step aside to other viewpoints for a few pages) and it's also very linear, content to follow her story, say what she does and let her shape events. The other characters are all very much in support - even Nell's friend Ruby, and the odd (somewhat creepy) boy Oliver - and this isn't a book about political machinations in Black Water City, the future of its society or indeed wider events. That may sound as though it might be claustrophobic but the reverse is true, in taking the time to explore Nell's life, her relationship with her father, the mystery surrounding her past - and her fears over her future - the book has more than enough to deal with and the singled-mindedness of its focus gives it clarity and, as I said, drive.

One of the stranger books I've read recently, I greatly enjoyed Spare and Found Parts and its rich, slightly gothic, slightly steampunk ambience. It's a wonderful, lyrical read, about the joy of making - the cover brings together Ruby's needlework and Nell's growing obsession with computers - of exploring, of life. The most wonderful moment for me was perhaps where Nell, blundering into a secret cell of computer geeks, discovers the joys of music... something Griffin pays tribute to elsewhere in the book - if you remember your binary and your ASCII you may be able to decode her message.