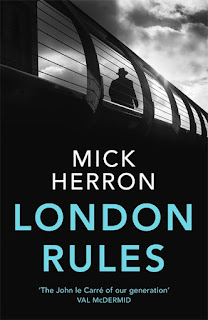 London Rules. What might those be? Something like George Smiley's Moscow Rules, perhaps - principles honed over many years, helping a spy to survive in hostile territory?

Well, kind of. We soon learn that "Rule one was to cover your arse..." which kind of makes sense and probably encapsulates whatever you might want to say in any longer set of espionage commandments. But when the bad guys begin to play the game, we're warned that if "they want to play London Rules, they should have known to write their wills first".

Rule One is particularly apt for Jackson Lamb's little team of Slow Horses, those would-be spies who have messed up somehow and whose careers have taken a turn into the shabby dead-end corridors of Slough House. The drug addict with anger management issues. The alcoholic. The hacker with just too much ego. And Lamb himself... we found out more here about what sent this magnificent monster to Slough House. (Lamb is a wonderful creation, the fast food eating, unhealthy, hard-drinking,  chain-smoking cop dialled up to a hundred and eleven). The Horses are only there on sufferance. Nobody will look after them. They have to do it all for themselves. And also, they have to do it for all of us. Because it seems that when the gates of Hell open, the smooth operators of "Regent's Park" - home in these stories to MI5's best and brightest - can do nothing to swing them shut again.

A terrorist campaign is playing out, with mounting carnage - 14 dead, in one incident - and nobody knows who is behind it, or why. At the same time (the book is set post the EU Referendum), populist politicians have emerged from under their stones ("recent years had seen a recalibration of political lunacy") including one prominent Brexiteer with a wife who's a notorious tabloid columnist. Thank goodness this is fiction.

As the PM's favourite modernising Muslim campaigns for one of the new Mayorships in the North, the mounting violence might be the perfect opening for Dennis Gimball to make his name.

And then there's an attempt on the life of Slough House's very own, Roderick Ho, hacker extraordinaire, the Rodster, the Rodman (in his own estimation). We're permitted inside Ho's head (ugh) and might just wish his would-be killers well - except that doesn't sit well with Rule One, does it? So the Slow Horses gallop into action ("if you think our little gang of Jason Stillborns'll pass up the chance to mount their own private op, you're forgotten what testosterone smells like...")

What follows is a tautly plotted, often tense, always funny drama that delights in imagery and wordplay and animates its characters with some very shrewd insights. These very from the sly

"Louisa was telling Shirley her idea for a TV show, which would open with a view of Tom Hiddleston walking down a long, long, corridor, shot from behind. River waited. 'Then what?' he asked at last. But the women had misted over, and didn't hear him...",

"It was difficult arguing a point when you had no reliable information or accurate knowledge. Unless you were online, obviously."

"The day was packing its bags and tidying up... during the winter the day tires early, and is out of the door by five: coat on, heading west, see you tomorrow".

There's a nice line in what you might call espionage mythology - Herron notes that "there's nothing Spook Street enjoys more than a legend, unless it's a myth" - with references and nods to some of the classics including of course Le Carre's: like the secret in Le Carre's Smiley trilogy, the answer here lies in an old, old file and Lamb has to track down an old, old archivist to nail it who in, I think a nod to the "Registry Queens" of the Circus is now a "Queen of the Database". But the book builds its own mythology too, mentioning that "Lamb had done his time behind the Wall, and could still read the writing on it" and referring a number of times to the OB, the Old Bastard, grandfather to River, one of the Slow Horses and a man so lost in his legend that he's just that, just lost. The OB was at the centre of the previous book, Spook Street, and it's good to see him still waiting in the wings.

Herron also displays a nicely jaundiced view of the referendum's aftermath ("a frenzy of backstabbing, treachery and double-dealing on a scale not seen since the Spice Girls' reunion"). One of its unforeseen consequences, notes the PM in this book, "was that it had elevated to positions of undue prominence any number of nasty little toerags. Ah well. The people had spoken." and (another Rule) "...when campaigning, lie your head off - the referendum's other great legacy..."

Overall this is a great, compelling read. It's a book that kept me up till 1 in the morning till I had finished it. I devoutly pray that the UK's safety isn't in the hands of anyone like the Slow Horses... or do I?