Review - The Darkness by Ragnar Jónasson 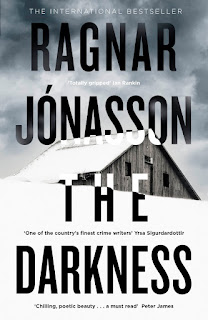 I'm grateful to the publisher for an advance copy of The Darkness.

I enjoyed Jónasson's Dark Iceland sequence, set in the far north of the island. With The Darkness and its forthcoming companion books, he's moved things to the more populated area around the capital, Reykjavik and introduced a new protagonist, DI Hulda Hermannsdottir. Hermannsdottir is reaching the end of her career in the police, a career during which, we're told, she's investigated a number of high profile cases and become highly regarded member of the team: but that isn't how she sees things, rather she feels passed over and excluded by the clubby maleness of the team. And indeed, throughout this story she's pretty much alone - and the title of her book reflects her experiences.

Quite simply, the book seems to record everything going wrong for Hulda as she faces losing the job that's the only thing left which gives her some identity. The book documents, in flashbacks, some of the events that brought her to that position, but makes no judgements: it's left to the reader to join the dots and I don't want to say more for fear of spoilers. What I will say is that Hulda begins to make mistakes and goes out on a dangerous limb. At first this seems mysterious, but as the story rattles along - it's a quick book to read, organised in short chapters, the tensions building and building - we begin to see where she is coming from and to appreciate both why she makes those mistakes and also what the stakes may be.

Faced with imminent retirement, Hulda sets out to investigate a cold case, the death of a Russian asylum seeker. Nobody else seems to care about Elena and by paying some attention to her life, Hulda almost seems to commemorating her, bringing her back to life and memory, in the face of an uncaring bureaucracy. This work of memory, of un-forgetting, is at the heart of what the book is trying to say, I think. It almost overtakes the point of "solving" a "case" and becomes a moral crusade, touching something deep in Hulda.

Which brings us to this series as a whole. We're told that in successor volumes (The Island and The Mist) we will see Hulda's earlier life. The book hints at a couple of major cases she has been involved with and I don't know whether they will be covered in those books but I hope that they do shed more light on Hulda and on the events of this book - because I want to know more as I'm sure you will once you've read it!

Finally, a word about the translation - the English of this book reads very well and clearly, while retaining just enough of a sense of foreignness to match the unfamiliar landscape - the black lave fields! the white highlands.

Overall a VERY strong start to this new series.