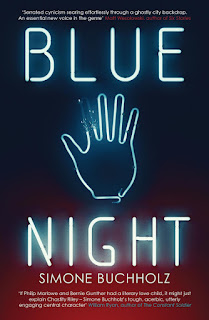 I'm grateful to Orenda Books for an advance copy of Blue Night and for inviting me to take part in the blogtour.

Blue Night is the first in a series featuring Hamburg public prosecutor Chastity Riley. Her (to me) unlikely name and some of the flashback detail hints at a foreign (non German) background and the flashbacks at a tragedy in her early life but we have yet to hear details of those. Watch this space.

In the meantime, we have Chastity's recent history: sidelined by her office for exposing a senior prosecutor as corrupt, she's been assigned to witness protection but seemingly in a very vague role that keeps her at arm's length from the rest of the department.

That seems to suit Chastity down to the ground, giving her maximum freedom to indulge her loner tendencies, manifested especially by chain-smoking, heavy drinking and gazing moodily at Hamburg's admittedly awful (at least, according to this book) weather. That may sound rather off-putting but in Buchholz's hands it's actually rather appealing. Chastity's little world - bounded by her flat, the Blue Night bar run by her friend Klatsche, and the cafe/ restaurant belonging to Rocco and Carla - is fully detailed (when off duty, she has a tendency to end up working behind the bar if someone has to rush away on an urgent errand) and peopled (add to the above her ex boss Calabretta and retired colleague Faller - about whom, for different reasons, the group of friends are worried). One senses that these are real people, with real histories: this is heightened by occasional chapters starting from 1982 which and feature thoughts of the principal characters as they move towards the present-day story. It's a very effective device, like overhearing the internal monologue of characters waiting to step out onto a stage. (And it also includes figures who aren't identified till well into the story, so hinting at the role they will play).

Into this somewhat Bohemian world comes Joe, victim of a gang attack whom Chastity is charged with guarding. She begins work on him, coaxing out his story and joining the dots between it and the wider world of crime in Hamburg. But if she learns too much, will this place her - and her friends, especially some who have past connection in the underworld - at risk?

The crime background to this book isn't, in the end, particularly complicated nor is it the most interesting part of the book. Wisely, in my view, especially given this is a relatively short book, Buchholz spends most of her time on Chastity's relationships with her circle of friends and with Joe. The result works very well, whether seen as a study of character, a slice of noir (I should write Noir, this book has it in (Sam) spades) or as mainly laying foundations for what I hope will be a future series.

The language is a joy. Take the opening words


Under a dark sky the engine gives one last cough, clears its throat like an old man, then floods.
I get out, sit on the rusty-gold bonnet, and raise my face to the heavy, cold air.
Cigarette.
First things first: I'm going to smoke this damn fog dry.


I can't stop staring at the damn moon.
I smoke another three to eight cigarettes, and someone knocks on the door, two long, three short.

This must reflect, I think, an especially fruitful collaboration between Buchholz and translator Rachel Ward, I don't, of course, know how the original German reads (it would be beyond my ancient "o"-level ability anyway) but the English is simply addictive. I also loved the chapter titles, gloriously elaborate confections such as "Candles all round, please", "I'd like to go somewhere, right now, where I can smoke" or "Because it's Sunday" which tend to reflect Chastity's state of mind more than the progress of the story, as well as giving the merest hint of how she senses the atmosphere in colour, reads a crime scene for the touch of a murderer, knows when something's about to go down. It isn't painted as a sixth sense or a mystical ability but does come across as Chastity being very much in her element in those mean streets as the late drinkers head home and the litter blows down the Reeperbahn.

Simply an excellent slice of atmospheric crime. Give me more, soon! 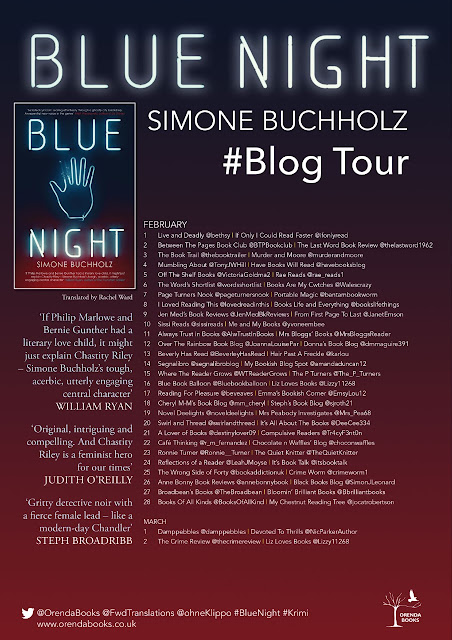