I had a fun evening last night. Working in the middle of London does have advantages - I managed to get to two book events after work.

Leaving early, I made my way to Sloane Square underground and walked up Sloane Street (interesting, but not a place I'd naturally go) to the Embassy of Iceland for the launch of Quentin Bates' Thin Ice (which I'll be reviewing on the blog tour in a few days). 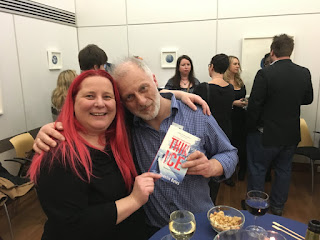 It was a great event with bloggers, authors and event the Ambassador present (no Ferrero Rocher, but there were lots of nibbles). I found out what Deal Noir is (thank you, Susan Moody) and exchanged a word or two with the great man himself - some of whose translations I've read but none of his own books. Here he is with Jo Parker of Life of Crime. 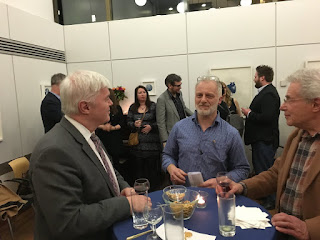 And here's the Ambassador, welcoming the book and proving he has read by pointing out it mentions his home town THREE times. I also had a helpful chat with Guinevere Glasfurd who  explained that the best times to visit Iceland are winter or summer but not in between. I might try and persuade the family that this should be our next destination. (The Ambassador agreed that this was a good plan).

The second event I wanted to get to was at Waterstones Piccadilly. Left out of the Embassy, on up Sloane Street, into Knightsbridge Tube then three stops on the Piccadilly Line to Piccadilly Circus which is very handily placed for Waterstones - or do I mean Waterstones is handily placed for Picc. Circus? I don't know. Anyway, I arrived just before 7, and the event was in full flow - AK Benedict (author of Jonathan Dark or the Evidence of Ghosts), Sarah Pinborough, whose 13 Minutes is just out and Steve Cavanagh whose latest book is The Defence - he very kindly signed a copy for me to give my mum on Mothers' Day (nooone tell her).

The three authors were being interviewed and it was enlightening to hear their contrasting thoughts - especially on how their books mirrored (or didn't) their real lives. Steve Cavanagh explained how he got inside the mind of a conman (and how, as a lawyer, he was told by a senior colleague that he had a criminal mind). AK Benedict pointed out that her book was, unintentionally, about loss: the main character is having a breakdown after the collapse of his marriage, with death and failure also featuring. And Sarah Pinborough distanced herself, as a responsible adult, from the teenage sex and drugs of her book while speaking very movingly about the pressures that teens face - and about that attitude of invincibility, just starting to crack at that age. 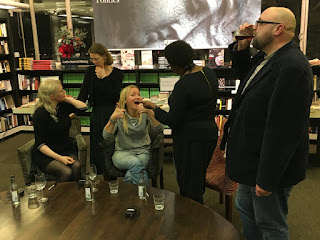 At the end I got books signed by all three: here's the picture I tweeted next as "authors signing" although perhaps I should have entitled it "Authors drinking wine".

Most frustratingly I had a bout of authorstruckness (which IS a thing: it's when your mouth moves but nothing sensible comes out because the sheer amazingness of meeting such WONDERFUL AUTHOR-Y PEOPLE) and the aftereffect was that I paid for my new books and hurried away, totally forgetting that I'd brought along some I already had and I ended up taking them home UNSIGNED.

So I have some unfinished business with my authors... but never mind. It was a wonderful, if frantic, night and, I think, a totally fitting way to spend World Book Day evening.

So thanks to everyone who arranged these events, spoke at them and for having me at them.
Email ThisBlogThis!Share to TwitterShare to FacebookShare to Pinterest
Labels: AK Benedict, Events, Sarah Pinborough, Steve Cavanagh, Waterstones