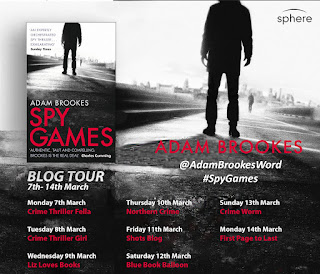 I'm grateful to Sophie for providing me with a copy of the book to review as part of this blogtour.

Fearing for his life, journalist Philip Mangan has gone into hiding from Chinese agents who have identified him as a British spy. but when he is caught in a terrorist attack in East Africa and a shadowy figure approaches him in the dead of night with information on the atrocity, Mangan is thrown back into the eye of the storm...

In one sense they're apt, in that like those other books this is very good writing, gripping, page-turning, thought provoking. Brookes is, you feel, a total master of his material. He knows what he's doing, he understands the world he has created and his characters, he takes the time and space needed to set things out, then he closes the trap. Everything convinces, right from the start.

Yet I think they're also misleading. In terms of antecedents, this book suggested something older to me. In its relation to a vaguely menacing background of geopolitics (the scramble for East Africa, the direction of China) and in the central character, at-a-loose-end Philip Mangan, clearly bored rigid, itching for adventure, I was drawn to a comparison with John Buchan. No, the book isn't about a bunch of tweedy men anxious for the fate of the Empire (in fact in a quote from - of all people - Richard Murphy, Brookes makes it clear that he has no sympathy for the sleazy financial webs that have succeeded the Empire).

But then nor was Buchan. Those were at heart spiritual books, always seeking - behind their "shocker" plots - some kind of moral centre, some sense of completion, for the protagonist, albeit then he was usually to be found suffering from ennui as he kicked his heels in the gentlemen's clubs of Mayfair. Mangan, by contrast, seeks a life of adventure in Africa as a journalist. But he's frustrated at not being able to get close to the big stories and he looks back with longing (as well as fear) at whatever it was happened earlier in China (I hadn't read Brookes' previous book Night Heron but will obviously have to now). So when a mysterious Chinese colonel appears, offering to whisper secrets in his ear, it doesn't take Mangan long to accept that he's back in the game, to almost casually shrug off Maja, the Danish nurse who's interested in him, to casually note how he's placing her and his Ethiopian friend Hallelujah in danger by associating with them - but not to warn them - and to get himself in deep, deep trouble.

The events in Ethiopia are linked to what at first seems almost a sweet story of two young Chinese students at Oxford. They come from rival families of kleptocrats and both have hard-eyed minders to keep them apart. Will love - or even lust - conquer all? What will happen if it does?

As things speed up we get detailed and, to me, convincing account of Mangan's crash training as a spy: plenty of glimpses of life at Vauxhall Cross, the home of MI6 (the building you saw blown up in the last Bond film, and the one before that) and lots of satisfying thriller-y jargon.

But to me, despite the modern dressing, here we have  a modern Richard Hannay preparing for his trip across Germany in wartime to hunt Greenmantle. And I mean that as a sincere compliment - for sheer, compelling writing I don't think any writer has beaten Buchan but if anyone comes close, it's Brookes.

In the end, Mangan remains something of an enigma, as do Patterson, his cool, competent minder and even Valentina Hopko, her controller. In these three, Brookes has I think developed a superb triad of competent, dangerous people (oh, I do like competent, dangerous people - in books!) and stirred things up between them just enough that - together with hints of dark secrets to be revealed - there is bound to be trouble looming in future. (And I trust some of the others come back too: sinister Nicole, for example).

I hope that trouble comes soon because, as with the best books, I really didn't want this one to end, I just wanted to keep reading and reading...
Email ThisBlogThis!Share to TwitterShare to FacebookShare to Pinterest
Labels: 2016, Adam Brookes, blogtour, espionage, Philip Mangan, review