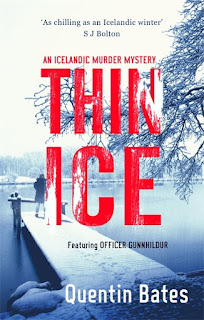 I'm grateful to Linda, the organiser of an epic blog tour, (just look at the poster below - LOOK AT IT!) for sending me a copy of this book.

I'd come across Quentin Bates before as a translator so was excited to see that he's also written his own books - indeed, this is the 5th in a series featuring Officer Gunnhildur of Iceland's police.  While it's generally a little daunting to come into the middle of a series, here the entry is eased as the book jumps straight into the action - a low grade crook, Össur,  and his rather naive sidekick Magni (a sailor fallen on hard times: impressive in size and, we're told, irresistible to women) are robbing local drug dealer Alli "The Cornershop" at gunpoint.

The consequences of that raid set up the rest of the book as Össur and Magni flee, take two women (Erna and her daughter, Tinna Lind) hostage when their getaway falls though, and hole up in an out of season hotel. Össur is increasingly paranoid, subsisting mainly on the drugs he grabbed from Alli and continually clicking his pistol's safety off and on: Magni is more sympathetic, and soon, an empathy begins to build up with Tinna Lind (who is herself something of a wild child, and the despair of her more prim mother).

Meanwhile, Alli will do anything to get revenge (and to reclaim the 300,000 Euros the two nicked from him) - even coming to an arrangement with hated rivals, the  biker gang, the Undertakers (when you hear a name like that, you just know mayhem will follow).

Gunnhildur already has a murder on her hands (another smalltime crook has died in a mysterious fire) as well as the disappearance of the two women. In a taut narrative, Quentin Bates tells the story, mainly, from the viewpoint of the crooks and their hostages, while also exploring Gunnhildur's family problems - like almost every family described here she has a complicated series of relationships, exes and children, leading to a sad little subplot featuring her son and his estranged father. If, like me, you hadn't read any of the earlier books there is enough here to fill in who everyone and it's explained quite subtlely, without long stretches of exposition.

I hope I haven't given the impression that Gunnhildur's a typical storybook detective with a wrecked private life. While her family background may be complicated, she's far from living only for her job, she's not a maverick at war with her bosses and instead of going off following hunches she deploys the apparatus of a modern police force with skill and tenacity. (There's a running joke here when the "Special Squad", brought in a number of times when things look as though they might turn rough, arrive too late to see any action and are disappointed).

All in all a well told, classic detective/ thriller which makes good use of its Icelandic setting - not least to set up the fact that there are limited options for the fugitives - and their hostages - as winter closes in.

Then, at the end, the book makes you turn around and rethink what you've read and wonder who was really in control throughout, and who was actually on thin ice... 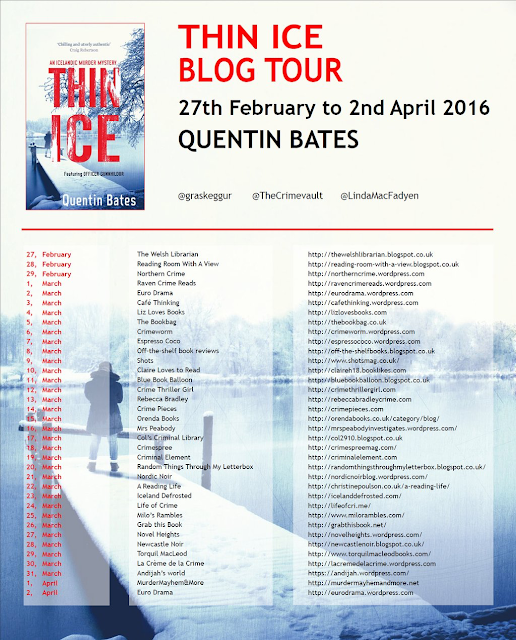