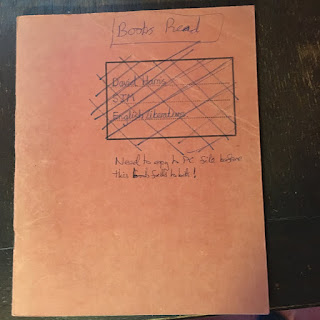 Through various house moves and clearouts I have thrown away most of the school exercise books I ever had, but I still have a few, including this one. It was an English Lit. book when I was in my 5th year (5JM means 5th year, and my form tutor was Miss J Moss) of secondary school. I think this is now called year 11(?) (I was in a group that did English Language O level in 4th year - a year early - then Literature the following year, doing the course in one year instead of two. The others hated us for being swots...)

I'm finding it interesting going through this, trying to remember what I read and why, and I thought I'd share it here.

As well as using this for essays and written work (the first item is dates 6/2/84 and sets out work to be completed on Henry IV Part One - including a list of insults in the play!) I began recording the books I'd read. I think we must have been asked to do this, there's no way that I would have written something in a school book that hadn't bee sanctioned by the teacher - I wasn't that sort of child!

Anyway, I carried on using it for that purpose for years after, at least until 1992 (the last date, although the list of books read goes on for some time after that). I think I may have got less meticulous about writing them all down towards the end, and then I stopped, and didn't really start tracking my reading again till I began Amazon reviewing around 2000 (but it was several years till I began reviewing everything).

I thought it might be interesting to look at what I was reading 33 years ago.

Here are the first two pages 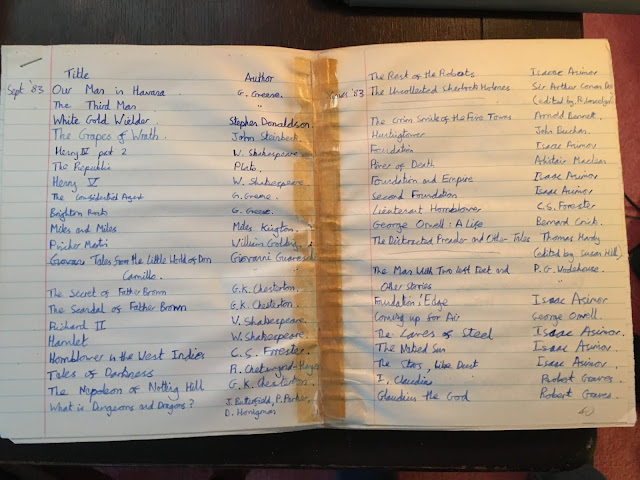 Given that the dates start in September 83, I think I've started by going back and listing books I'd previously read - supporting this, I'm sure some of these books were on a reading list given to us earlier by our then English teacher, Mrs Allinson. Our Man in Havana and White Gold Wielder were on that list. (In passing it only struck me later that she must have been something of a SFF fan, recommending Stephen Donaldson, as well as Asimov (I, Robot - although that's not on here).

The marginal note on the second page - "Xmas '83" - reminds me of what seems in memory of days and days spent eating chocolate oranges and reading through the books I'd been given, many of them I think off that same list (although the ones I remember most clearly, the John Buchan Richard Hannay books, aren't there, so perhaps that was '82 not '83...)

There are other books on here I found for myself: the Father Brown stories, Hornblower. I had already discovered Orwell (which is why by this stage I was reading his biography) and at the same time PG Wodehouse. I think that I, Claudius was on that reading list (I wish I could find it!) as was The Napoleon of Notting Hill.

Pincher Martin was in the school library and I was encouraged to read that by one of the teachers who helped with the library - I have to say this is the first time I can remember I had that "there's ten hours of my life I'll never get back" feeling. I was probably too young for it, but it put me off Golding for life (I wasn't really impressed by Lord of the Flies either, but it was at least more readable).

Don Camillo was on TV around that time in a BBC adaptation, which is why I read that. What is Dungeons and Dragons? speaks for itself and all the Shakespeare was, I think, an attempt to put the play we were studying in context (I don't think I got too much out of it: it wasn't really meant to be read, was it, but performed?)
Email ThisBlogThis!Share to TwitterShare to FacebookShare to Pinterest
Labels: 1983, my reading history