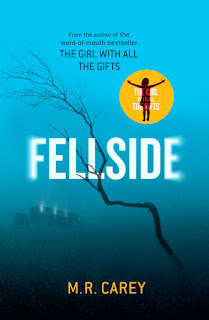 Before I get into this review I should issue a couple of warnings. First, it's going to be very hard to do the book justice without dropping some spoilers. I don't want to do that, so if you find things getting a bit... cryptic... that may be the reason. (Or it may be me reviewing badly, it can happen). Secondly, this is a very violent book in places. I didn't find that a problem but if that bothers you, take note. It is also, though, in places a very tender book).

Carey had a hit a couple of years ago with The Girl with all the Gifts and Fellside seems, at first, to resemble the earlier book. There is a sympathetic female protagonist with a dark history who's clearly in A Lot Of Trouble, an institutional setting, some real hard cases making her life difficult and - behind the gritty realism - an element of the fantastic.

But that's only, I think, superficial. While I enjoyed Girl a lot, this is in many ways a tenser, more complex story.

We first meet Jess Moulson when she wakes in hospital. She has suffered injuries and - beyond those - something very bad has happened. How bad, and the exact trouble she's in, would be one of those spoilers but it's enough to say for now that it carries her away to Fellside, a private mega-prison somewhere in (I think) a remote part of Yorkshire. There is some grim humour here in that the Governor believes he's running a model institution while the very opposite is true. Jess's problems only get worse: shut away (in her own view, deservedly) she's prey to the truly terrible Harriet Grace, leader of the prison drug gang; to prison staff, revolted by Jess (spoilers!) and not above dealing out their own justice; but most of all, to the voices that come in the night.

Jess has, it seems, a strange ability to walk through others' dreams - and hear the voices, to meet others who walk through them: "the dead were dreams that dreamed themselves alive. Maybe the living were too..." That means she can not only engage with her fellow inmates on a visceral level, but also, perhaps, with her own past. If she doesn't lose herself in the Other Place, might she be able to find the evidence that will free her from Fellside? But if it does - with so much else going wrong - with it be too late?

The book knots together Jess's own quest for redemption; her lawyers' attempts to prove her innocent; the machinations of Grace and her accomplices (willing and unwilling) as they try to use her for their own reasons; the despair of weak people, fallen into Grace's power; and a tragic love story. All woven round the nightmare world of Fellside, which Jess explores by day as a prisoner and at night, in her dreams, as something else.

What's especially good is the balance between the fantastic and the mundane. This is a supernatural story, no doubt about that, but Grace is a scarier monster than anything in the dreamworld and the day to day indignities and fears of prison life can't just be stepped away from but have to be lived through, and not only by the prisoners: others are locked away in Fellside too.

The characters are also real - frighteningly so in the case of Grace her associates, but everyone here - the other prisoners, the prison staff, Jess's legal team - is so well drawn that you could have just met them at work. You mostly wouldn't want to, but you could. In fact I think I've met real people who were less convincing than some of these characters. Equally with the setting. Yes, the systemic reality of a prison is exposed in harsh detail (the corporate flam of the PR and legal suits, the smug Governor) but that's not the main point: quite simply, Carey makes Fellside-the-place simply, simply, real. (Another scary thought. I don't want it to be).

This degree of reality both in setting and character means that when it's time for the fantastic you simply walk with Jess and accept it - the weird dream logic, the nighttime world - and therefore its consequences. This is how such things would be, if they were. (The reality does slip, but only at one point - you'll know the moment when you reach it, in a courtroom scene where something happens that is obviously needed for the sake of the plot, but that wouldn't, in real life: by then though the book has built up such a head of steam that that this scarcely registered with me.) That's how, for me, this is a better book even than The Girl with all the Gifts.

The complexity of Jess's situation, her need for redemption - and where will she find that in Fellside? - the absolute reality of the characters and the fascination of the mystery that she very gradually unteases, kept me totally hooked and wanting more of this.