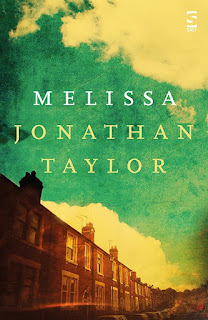 I'm grateful to have received a copy of this book for review.

Melissa is a brilliant read, although by no means always an easy one. Emotionally - and it is above all, I think, an emotional book - it is raw, the hurt of the main characters almost bleeding off each page. They are all - Harry the father, Lizzie the mother, Serena the sister and daughter - living through a nightmare of grief and guilt after the death from leukaemia of seven year old Melissa Comb, lover of spiders, Harry and Lizzie's daughter, and Serena's younger sister.

As Melissa dies, a strange acoustic phenomenon envelopes the street where she lives, a discordant and alarming noise that evolves into something like - but not identical to - Elgarian music. The "Spark Close Phenomenon" attracts attention and the Close is plagued thereafter by cranks, New-Agers, neuro-musicologists, musico-neurologists, journalists, hawkers and gawpers whose presence is a continued theme in the book. The irony of the Phenomenon is that it wasn't shared by the Comb family. While others experience a presence, a Thing, the Combs know only absence, a nothing - as concrete an illustration of the "Stop All The Clocks" paradox on the death of a loved one as you can ask for: surely the world must end, bowed by the weight of one's grief? But of course it won't. Harry sees this directly: if only, he thinks, there were an end, as with a piece of music. But life will insist on carrying on.

Harry, lost in grief, tries to make an end whether by walking out of his job, locking the piano so Serena can't play it any more, or just sitting:

But it turned out to be a silence which ended with his reaching - slowly, deliberately - for a cracker on the plate next to him, cutting off a little piece of Stilton, and placing it in the centre of the cracker. By the time cracker and cheese reached his mouth - slowly, ever-so-slowly - the door of the living room had slammed shut, and Serena had gone, taking all other possible endings of that silence with her.

He also tries blame, self-loathing and any other emotion that might cut himself off from life, bring an end. As Head of the House, Harry insists on being hurt, refusing to serve up to a guest the turkey leg that is Melissa's favourite part of the bird and seeking comfort from the notorious Ms Kirsten Machin (what really did happen between them? We get different accounts, but there are I think no reliable narratives here).  But he isn't alone in his despair, which is shared by Lizzie and Serena: Lizzie needles her stepdaughter, buying the wrong type of milk or hassling her over how her "image" won't help trap a boyfriend: Serena breaks down in class, seeing echoes of Melissa in everything she reads.

The story is told from different perspectives, mostly by a narrator, partly by quotes from newspapers (and The Sun), reports, emails, medical diagnoses and other sources. As a result it can circle round its subject, sometimes repeating the same events from a different perspective, or jumping forward or back - and significantly leaving a gap, a Melissa shaped gap, which fills with the aforementioned grief, blame and guilt. And with music: the book is suffused with musical analogies, structures and speculations whether implicit - for example the form of the book is a Prelude, Variations and a Code - or explicit (Serena's conversation with her Physics teacher about music and entropy).

It is a powerful story, which is nonetheless very funny in places: the Combs' neighbours provide a degree of relief - though often dark, rather than light, relief - one is a Holocaust survivor, who contributes her own perspective on death and grief, another (Ms Machen) is the subject of a running gag about her babies who are often heard but never seen, a third seems to be a veritable Private Pike but whose mother endlessly goes on about his career in the Territorials as though it made him akin in soldiering terms to the Duke of Wellington: there is also a BNP supporter and a bouncer-turned-Bible basher, all of whom add to the rich tapestry of the novel.

It is not, as I said, an easy read, indeed, actually heart rending in places, but still a compelling and deeply human book, going to the heart of the grieving process (I can hear Harry sneering at that - "grieving process" - and taking another cracker).

It comes to a resolution... of sorts.

Not that there can be a final resolution because, as Harry, again wails, things don't ever stop.