Blogtour review: The Rise and Fall of the Miraculous Vespas by David F Ross 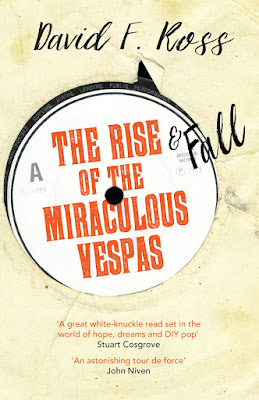 - Malcolm McLaren, quoted in this book

I am grateful to Karen at Orenda Books for a copy of The Rise and Fall of the Miraculous Vespas and - full disclosure - for quoting from this blog's review of Ross's previous book, The Last Days of Disco.

Like Last Days, Miraculous Vespas is set in Ayrshire in the early 80s. It follows on from the events of the earlier book and features some of the same characters. It doesn't though continue the story of the Heatwave Disco boys, but focuses instead on the titular band, formed by would-be music mogul Max Mojo (born Dale Wishart). Injured in the dust-up that concluded Last Days, Max/ Dale rises from a coma, changes his name and personality and sets out to make his dream of immortality real. But it isn't easy. Adopting a florid New Romantic dress sense and at the mercy of a war between two very different inner personalities, the cards seem to be stacked against him. But he has determination. He wants to make it big, and to create something beautiful. So he forms a band consisting of drummer Maggie, (fostered, just out of care, and short of trust in anyone), Grant (whose father - lieutenant to local crime boss Fat Franny Duncan, the would be nemesis of Heatwave - died in the earlier book) and the Sylvester boys (who have never got over the tragic loss of their mother in a lawnmower accident).

Can this collection of orphans, together, produce music that is new and true?

At the same time, the Ayrshire crime families we met before also face challenges. The riot that left Max with brain damage set them against each other, and the McLartys, hard cases from Glasgow, are trying to move back in. While the local gangsters are amateurish and even - at times - a wee bit sympathetic, there's nothing likeable about the McLartys who are about, it seems, to eat the Wisharts, the Quinns and Fat Franny's crew for breakfast.

The two plots run in parallel though the book, alongside Max's recollections, delivered in a 2014 interview. This provides his personal account of what was going on, contrasting with the more dispassionate, even forensic voice of the narrator who not only describes the action but also provides background information and even context (such as on Maggie's trust issues, the looming miners' strike or the local music scene).

Put like that, the technique ought not to work but it is actually very effective. The band parts of the story tend towards hair raising escapades at gigs or in visits to clubs, often featuring toilet cubicles and generally ending in the band as a whole or Max in particular getting chased down a wet backstreet at 2 in the morning. (Though not all of them. He's also chased down a wet High Street in daylight, the result of holding a meeting with a female Pakistani journalist in the Wrong Sort of Pub). Between these, Ross gives a genuinely moving account of their musical development, of Max's creative drive and of musical influences which - like in Last Days - gives him the opportunity to write passionately and even lovingly about the music of the time and to show how that music touches each of the band members. Switching between the two styles allows Ross to produce something like the documentary that Max is taking part in, illuminating the actual events with his unique take.

Max is on the face of things a profoundly unsympathetic character, foul mouthed and driven, yet he has a vision and there are moments of real pathos in the book as the reader knows - from the title and from the framing of the story - that something is going to go wrong for him. Indeed, Ross is very good at getting the reader to view his characters, even those who are on the face of it pretty awful, with a degree of sympathy and understanding. They quickly become real and we care about what happens to them.

The book has its comic aspects, whether it's a trip by the be-kilted Max and Grant to see Scotland play England at Wembley (and to make contacts in the music business), the running joke of the local Shabby Road recording studios, or the bizarre gig the Vespas play in support of "The Heid", a fading local hypnotist who's surprised in his dressing room while enjoying the close attentions of his daughter in law. (The Heid seems to be a fraud with a bunch of stooges, including said D-I-L: but still he manages to leave one of the Sylvester boys believing he's agoraphobic - tricky if you're the guitarist in an up-and-coming band). But the background is bleak, set in the lead up to, and during, the Miners' Strike. It is though less engaged with national events than Last Days was with the Falklands War (although the strike and the uncertainty that preceded it are referred to as one of the reasons that business is so bad for the three rather bumbling local crime families).

As a result this story is I think much more squarely about the music, about the hopes of Max, Maggie, Grant, Eddie and Simon - and especially about the difficulty of being noticed. It's a time when you can't record your breakout single in the bedroom with Garageband and put it up on the web: Max adopts a variety of means to catch the attention of the right producer or DJ - some pretty extraordinary (joining a crew of roadies to get into a club, ascending in a window cleaners' cradle and posting discs through the open windows of Broadcasting House), some more mundane (buying a biryani for the receptionist at a local radio station).

In short, the book is both hilarious and moving. It's well up to the standard of the previous part of what I understand is to be a trilogy and I'm looking forward to the final instalment. (Except, I don't want it to be the final part, I want more!)

Other excellent reviews of this book are available. See the poster below for details. 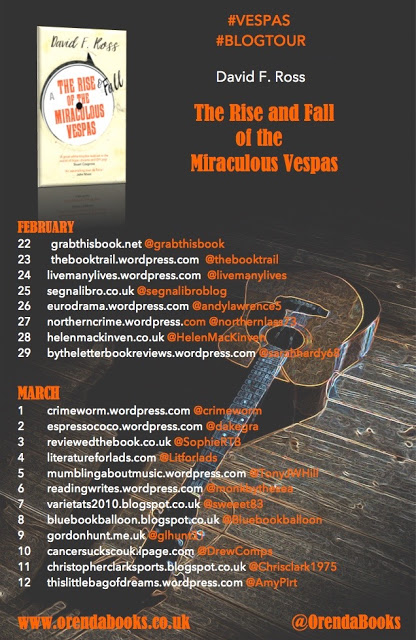