Review: Jonathan Dark or the Evidence of Ghosts by A K Benedict 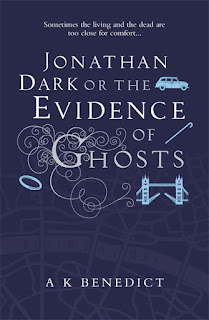 Even if the book hadn't totally won me over within a few pages, i'd love it for the final words: "he can't get away. Death has no sequel."  I hope that unlike Death, this DOES have a sequel, because Jonathan Dark is an intriguing and complex character and I'd like to learn more about him - and about some of the others.

Blending a skilfully realised detective plot with a background of ghosts and hauntings, Benedict gives new life (pun intended) to the "weird London" genre. Dark is a burned out detective, eaten away by his wife's infidelity, sleeping on the office floor, and throwing himself into work - tracking down a stalker and potential serial killer - to drown the pain. But he's not a stereotypical gritty copper: he has startling secrets and an intriguing family background.

The other character who I fell for is Marie, who has a cool job - she's a professional mudlarker (imagine being paid to grub around the London tideline, scooping up the detritus of 2000 years) and a stubborn sense of herself: blind, she had surgery to gain sight but then decided to remain blindfolded anyway rather than lose the London, the world, that she had. There's a wonderfully described scene where Maria takes Jonathan round Spitalfields Market with his eyes covered, experiencing a new world of smell, sound and heightened awareness. (Indeed, this sense of place - not just of London in general but of specific locations - is one of the book's great strengths. Everyone and everything is tagged, precisely nailed down, whether it's the girl who "has been serving burgers to clubber and lattes to lovers all night"; the empty taxis that won't stop (because they have ghost passengers); the crane that looks like a "waiting gibbet" of the London skyline "turning into a Seventies kitchen" - the Cheese-grater, the Gherkin; or the observation that "there is always an Apple in a coffee shop -it's one of the rules").

Unfortunately, Marie is suffering the attentions of a particularly unpleasant stalker. In the background is a shadowy, murderous cabal which looks after its own, complicating the investigation - as does the presence of ghosts, who have their own very definite ideas of justice.

And even the ghosts are vulnerable, to a most unpleasant thing called the Whisperer which feeds on them in the night. But when ghosts aren't enough to nourish it, might it turn on the living instead?

I felt that Benedict was taking something of a risk in combining the police procedural with the supernatural in the way she does. It's not that this is the first time it's been done - authors like Ben Aaronovitch, Sarah Pinborough and Paul Cornell have worked with the same combination - but in this book the two aspects feel, I don't know, so pure in themselves, such good examples of those genres that a crime mad reader or an urban fantasy fan might pick this up, scan a couple of pages, and assume it's straight genre (reading different pages of course).

Will they then feel cheated when they realise what's actually going on? I don't think so. The combination works. The crime parts never become too Silent Witness: the fantasy never goes completely over the top. Even the ghosts are very grounded - some of them have jobs, travel on the Tube or buy and sell in a parallel version of that same Smithfield market.

So - I think this is a brilliant mash-up, genuinely original and entertaining on every page. That's not to say the book is perfect. I wasn't wholly convinced by the behaviour of Tanya, for example, and there are one or two liberties taken with the Underground (I don't think there are any convenient emergency handles to open the doors of a halted train). But those are really slight things, far outweighed by the brilliant writing, the characters and the skill with which the central concept is explored.