#Review - Our Wives Under the Sea by Julia Armfield 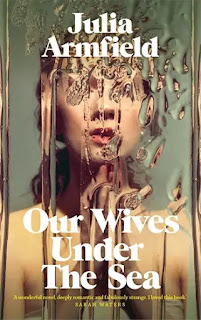 I'm grateful to Picador for a free advance copy of Our Wives Under the Sea to consider for review.

When I saw an upcoming first novel by Julia Armfield, I just had to get my hands on it. I was judge on the Shadow Panel for the 2019 The Sunday Times Young Writer of the Year award when her short story collection salt slow was shortlisted for the main award and won the Shadow Panel.

Our Wives Under the Sea is a story of two women, Miri and her wife Leah. Miri works from home writing grant applications for charities; Leah is an explorer, a scientist working on deep sea research for the mysterious Centre (there's something a bit... off... about the Centre, although we never find out what). In chapters narrated alternately by Miri and Leah, Armfield tells how Leah went to sea, was lost, and unexpectedly returned. And about the aftermath of that. Along the way we hear about their earlier lives, how they met, and their friends.

It's a short book but packs so much in. There is loss, twice over - Miri's time after Leah vanished (her dive went several months past its scheduled end) is mentioned in retrospect, with her complex feelings, the lack of closure, hinted at. More directly addressed is the growing realisation that the person who came back is not the same. Returned, Leah spends much of her time in the bath; she eats little; there is little conversation and no intimacy. Yet is she is, indisputably, back and shows flashes of her old self - and Miri desperately tries to find a way to cope, to reach out, researching, for example, an online community 'Our Husbands in Space' of women who pretend that their husbands have gone off on space missions (or, in some cases, 'Come Back Wrong" - CBW).

The Centre is little help, refusing to take Miri's calls, eventually providing a counsellor who it fails to pay. It's as though Leah has gone again, and only Miri's love for her remains. Miri's emotions - a mixture of anger, fear and (declining) hope really come over, all complicated by her relationships with her (now dead) mother and fear of developing the same degenerative illness as her (Miri once booked a generic test but lost track of time and missed the appointment). Miri has always seen herself as the one in the relationship who might end up needing care - selfishly, she now understands - and struggles to understand how she should be with Leah, becoming isolated from her friends and letting work slide.

Leah's side of things focusses more on the research voyage and her relationship in the diving ship with her two crewmates. Leah was always ocean obsessed - as a teenager her best friend was an octopus - so you'd think the dive would have been everything she wanted but the account of it seems frustrated, slightly disengaged, as though something were wrong from the start. Nor does it reveal, exactly, what it was that changed her so much (Armfield is clear that Leah is changed, and changing). The meaning of what happened needs to be read between the lines, worked out, imagined. There is a lurking sense of strangeness here, of being excluded from something even as we're let in to be told about events on the ocean floor (Leah hasn't shared these yet with Miri, though she will - but we don't see what Miri will make of them, another of the frustrations to communication which litter the book)

Alongside all the weirdness (lovely weirdness!) Armfield gives us very mundane, rooted scenes of modern life: a party with Leah's mates, figures who are immediately familiar, the recurring annoyance of a neighbour who leaves their TV on loud at all hours, the difficulty of negotiating the logic loop of a call centre. Gradually, I began to compare the isolated lives of Leah, Jelka and Matteo in their little capsule on the seabed with those of Leah and Miri marooned in their flat. Their lives outside those settings seem to become, increasingly, stories they recall or tell themselves, Leah almost unable to leave the flat, Miri more and more unwilling to do so. Isolation brings recollections of earlier lives - Miri's mother, Leah's dad from whom she seems to have taken her obsession with the oceans.

Inevitably the question arises of whether this is a "lockdown" novel and, yes, it does have that sense of enclosure, of squashing one's head against the window, as well as reflecting on the openness of sea (the book is imbued with the heaviness of the ocean) and sky ('People grow odd when there's too much sky'). But there's much more going on here than that. Leah's and Miri's lives, as seen in glimpses of the 'before' are being milled into something else by the rolling of the waves and that's not just a slide, it's a very active process which we seen going on - and, while the book may sound very sorrowful, it's not a process without hope.

I'd strongly recommend Our Wives Under the Sea - it may especially appeal to you if you enjoyed M John Harrison's When the Sunken Land Begins to Rise Again or Jeff VanderMeer's Acceptance, Annihilation and Authority.

For more information about Our Wives Under the Sea, see the publisher's website here.