#BlogTour #Review - Our Lady of Mysterious Ailments by TL Huchu 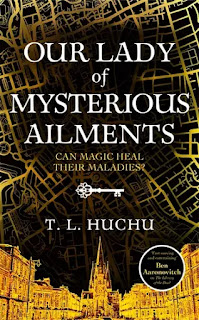 Our Lady of Mysterious Ailments (Edinburgh Nights, 2)
TL Huchu
Macmillan, 3 March 2022
Available as: HB, 372pp, e, audio
Source: Advance copy
ISBN(HB): 9781529039528
I'm grateful to the publisher, and to Black Crow PR, for letting me have an advance copy of Our Lady of Mysterious Ailments to consider for review and for inviting me to take part in the book's blogtour.
Our Lady of Mysterious Ailments sees a welcome return for Ropa Moya, a fifteen year old girl of living in a near-future Edinburgh in the wake of a cataclysm that has changed society. There has also been a civil war of sorts, perhaps an attempt at secession, which has left Edinburgh stricken and firmly under London's heel. Everyone is nervously determined to perform their loyalty:
'God save the King!'
'Long may he reign'
The city is poorer, in something like its 18th century state with carts in the streets and only the wealthy able to drive motor vehicles. Ropa lives in a caravan on the city's fringes with her Gran and little sister, Izwi. The site they live on is half slum, half refugee camp, and Ropa's their main provider, so at the start off the book considers herself fortunate to have landed herself an apprenticeship with Sir Ian Callender, Secretary to the Society of Sceptical Enquirers, Scotland's leading magical society. It's a development that has put noses out of joint at Scotland's elite magical Schools, and unfortunately Ropa is in for a fall, one that leaves her in desperately needing cash and puts her in the way of a little private business helping out her mate Priya.
Huchu writes this book very much from the perspective of those at the bottom. Ropa has a magical mystery to solve, but she easily spends as much time trying to keep her head above water and her family fed. Grabbing the odd gig at her old role conveying messages form the recently departed. Scrounging food (foraging for plums, killing an unlucky rabbit with her catapult). Trading the results with a web of contacts. Preparing meals. Negotiating with the Edinburgh gangs, whose perpetual Cold War has flared hot. And in the course of this we're shown many of the outcasts on the "informal" side of this magical Edinburgh, as well as the lofty ones who dominate it.
With the basics introduced in the previous book, The Library of the Dead, Huchu combines the mystery which is the ostensible subject here - a posh schoolboy who's fallen into a perplexing magical coma, one the skilled staff at the Our Lady of Mysterious Ailments hospital are baffled by - with a lot more backstory about Ropa, the Society and even Roma's Gran. It seems she has connections with the travelling people as well being known to Sir Ian. Exactly how and why we don't learn, Gran's not talking (I sensed a certain Granny Weatherwax stubbornness in her...) but it seems to have done Ropa no favours with the formal magical world. (In this series of books, prejudice is alive and well, and certain forms of magic are definitely considered less prestigious).
We also learn more about the history of this world, which is tantalisingly entwined with our own. A sub-plot exposes the Society's links to Scotland's shot at colonialism, the doomed Darien schemes, making the point (in an understated way) that many of our institutions have blood at their roots. But history has a way of biting back, and the goings-on in Edinburgh are also mixed up with high politics...
I loved this book, perhaps even more than The Library of the Dead. Ropa is an engaging main character, apt to quote philosophy one moment, philosophy the next and then quantum physics down the page. She's a restless, bright mind, seeing through the superficiality of society and in her magical learning, impatient with having to go through the basics when she's so much more talented than many around her. Which, of course, doesn't make her very popular - she's definitely attracted one Nemesis already.
There's also a sharp eye for injustice here. When all is revealed about who has been pulling strings, old school ties and friends-of-friends are enough to ensure that they dodge trouble and that a scapegoat is found instead. Magic may be fun and powerful, but it's bound up with a net of privilege and influence which is taken more or less for granted. I'm guessing that Ropa's patience with this situation (never abundant) isn't going to last through many more books and I look forward to fireworks ahead.
Overall, an inventive, engaging read, a book with great heart and passion and which is, above all, FUN from first page to last. Do read this - you don't have to have read The Library of the Dead first, but you will want to read it when you are done, I think.
For more information about Our Lady of Mysterious Ailments see the publisher's website here. You can buy Our Lady of Mysterious Ailments from your local bookshop, or online from Bookshop, Hive Books, Blackwell's, Foyles, WH Smith, Waterstones or Amazon.

Email ThisBlogThis!Share to TwitterShare to FacebookShare to Pinterest
Labels: 2022, Edinburgh, Fantasy, Library of the Dead, magic