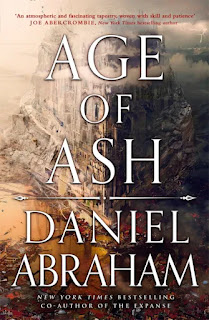 Age of Ash (Kithamar Trilogy, 1)
Daniel Abraham
Orbit, 17 February 2022
Available as: HB, 432pp, e, audio
Source: Advance copy
ISBN(HB): 9780356515427
I'm grateful to Orbit for an advance copy of Age of Ash to consider for review.
In Age of Ash's setting, the city of Kithamar, Daniel Abraham has surely created a classic fantasy city to rival Viriconium, Ankh-Morpork or Minas Tirith. His description of Kithamar's different enclaves, from Riverport to Seepwater to Longhill - especially Longhill - is vivid and utterly convincing, bound together by a dizzying web of activity as the citizens try, by means both legitimate and criminal, to keep themselves fed, housed and warm. Everyone has a thing going on - or two, or three - and everyone's position is precarious. We meet a city guard who's going to fall from grace, tradespeople of all descriptions - from wealthy merchants to knife grinders to bakers, butchers and candlemakers - whose prosperity balances on a knife edge, able to be ruined by a bout of illness, a caravan gone awry, a theft. There are prisoners shovelling up shit in the streets. There are thieves and con artists. And there are some even shadier figures.
The streets of Kithamar are bustling, vibrant and alive, Abraham taking us through one year of the place from the lazy days of later summer, when a ruler dies, through the glut and debauch of harvest with all the produce of the hinterland rolling into town to the perishing cold of winter, the promise of Spring and then, another dead ruler. The effect is simply hypnotic, the hardscrabble warp and weft of unregarded lives playing out against a background of sorcery and political intrigue. It may be a bit of a cliché to say so but Kithamar really is the central character in this book.
But not the only central character. Meet Alys, our guide in all the hurly-burly of Kithamar. Alys is smart, a street girl making her living as part of a pickpocket gang. Alys is a glorious creation, sharp, self-assured (outwardly) and gloriously pigheaded but unable to see what's right in front of her.
Meet Sammish. She's Alys's best mate, another young woman who has the crush of all crushes on Alys. Maybe "crush" is a bit unfair - Sammish is positively smitten, head over heels, but Alys can't see it. Her focus in this story is rather on her dead brother and her hunt for his killer, and Sammish finds herself being used, willingly used perhaps, but used all the same, as part of that. The tension between the two women drives this story, Sammish suffering as Alys dreams up ever more outlandish schemes to find the truth. Inevitably, Sammish begins to make her own discoveries, threatening the friendship between the two, sending Alys off to new friends, risking Sammish becoming "street bound". And in Kithamar, you need your friends, you can't afford to lose your edge...
I was bowled over by the sheer zest of this book, but also by its meticulous layers of detail, its addressing of various realities of life in a city like Kithamar. For example, half of what we see of Sammish is her simply trying to make a living, running several jobs at once and then getting distracted form them and losing money she can't spare when Alys comes knocking. The whole thing reminded me of a Hogarth etching, the multifarious figures of city life glimpsed about their doings, with dire warnings of what might come and raucous enjoyment of today: eat, drink and be merry, for tomorrow we die. And Alys herself runs into trouble: she's from Longhill, the oldest district of the city and one whose people see themselves as slightly apart from the rest. Longhill tends to look down on anyone who gets a bit of coin together and moves out. Longhill looks after its own, but it's a pinched, inward looking belonging - as Alys is about to find out.
Alys's grief through most of this story, and Sammish's love - or at least lust - are powerful themes, the primary drivers of the two women's actions even when more abstract strands of plot emerge. Abraham is deliberately slow to introduce these strands, to move from the intricate scene setting of the first hundred pages or so and bring in politics and dark secrets. I've seen some reviewers who didn't get on with that, but for me, I liked that order of priorities. I loved the establishing of these striking, captivating characters and of the city where they live. Age of Ash gives, I think, a gutter level view of fantasy. It's all very well, it seems to be saying, running off in pursuit of magic and conspiracies, but that doesn't put food on the table and it doesn't help when the girl you want has other ideas. This is truly human fantasy. Yes, there is enough chicanery going on here too satisfy any reader, and hints of darknesses and ancient evils, but its effects are mainly personal, intimate: a mother and her son, a broken friendship - and negotiating these is also the, very human, way that right can prevail and a kind of patched up wholeness be restored.
So, really, all I can say is, read Age of Ash! It's simply superb. Don't miss this one, please don't.
For more information about Age of Ash, see the Orbit website here.
Email ThisBlogThis!Share to TwitterShare to FacebookShare to Pinterest
Labels: 2022, cities, Fantasy, magic