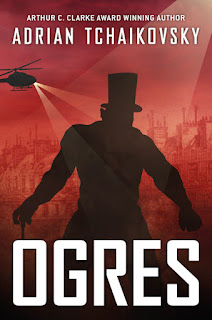 Ogres
Adrian Tchaikovsky
Rebellion, 15 March 2022
Available as: HB, 144pp (17 March), e, audio
Source: Advance copy
ISBN(HB): 9781786185280
I'm grateful to the publisher for a free advance copy of Ogres via Netgalley to consider for review.
In this standalone novella, Tchaikovsky explores a future where genetic engineering has produced a race of monsters - the "ogres" of the title - who oppress and dominate humans.
The main character is Torquell, the son of a village head, who comes across as a bit of a tearaway, reluctant to tug his forelock before the Masters. Good for him I say - the ogres in this book have adopted the role of feudal overlords, taking what they will and treating the peasants abominably. It later becomes clear that they also operate a form of robber-baron capitalism, with the worst aspects the Industrial Revolution gleefully reintroduced. So I'm all for opposition, but it seems doomed.
As an outlaw, Torquell's challenge is then first to understand how all this came to be and then to do something about it. It's a formidable task, as the ogres are not only collectively in charge but individually stronger and much bigger than any given human. But there is more going on here than that, something hinted at by the story being narrated not by Torquell, but to him, in the second person ('You were always trouble' are its opening words) so we sense other actors on the stage, perhaps.
I really enjoyed this one. The world which is seen through other eyes may seem rather alien, and be set in the future, but increasingly I began to see correspondences with our own world. It's explicitly a near future dystopia (I think it's fair to call it that) representing a world which claims to have solved certain problems - environmental and social - but at the pice of introducing others (you'll have to read it to understand which). Tchaikovsky's argument is though, I think, that those "new" problems, embodied in the society that he describes here may not really be that new at all. As with the best SF, the book holds up a mirror to our own society, both to its evident flaws and also to the damage that may be done in trying to correct them.
In centring on a driven, if originally reluctant, leader figure it also gently satirises the hero tropes of the dystopian genre: that opening passage continues 'Inevitable, really. And you weren't to know it, but you were following a particular trajectory. The Young Prince is always trouble...' The narrator returns to this theme several times throughout the story, comparing Torquell to the protagonist in the Hero's Journey, not always to his credit. The biological determinism of the process that created the ogres therefore hangs over Torquell himself as a sort of plot determinism, asking us what he is, why, and what he might become.
And whether the template will be followed to the end...
For a short book - I read it in a day - this one packs a tremendous amount in, and truly left me thinking.
For more information about Ogres, see the publisher's website here.
Email ThisBlogThis!Share to TwitterShare to FacebookShare to Pinterest
Labels: 2022, dystopia, Monsters, near future, SF