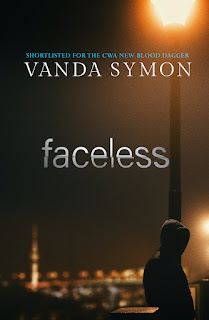 Faceless
Vanda Symon
Orenda Books, 17 March 2022
Available as: PB, 276pp, e
Source: Advance copy
ISBN(PB): 9781914585043
I'm grateful to Karen at Orenda Books for an advance copy of Faceless to consider for review, and to Anne for inviting me to take part in the Random Things Blogtour (on publication day too, what an honour!)
I was already familiar with Vanda Symon's Sam Shephard books, crime stories focussing on a young and impulsive New Zealand detective who generally stumbles into more trouble than she expects. While they do sometimes involve, as the film classification people might say, a degree of peril, Sam's adventures are fairly light in tone and at times, are even humorous (in a cynical sort of way).
Well. In Faceless, Symon has produced something altogether darker, much more "psychological" and which is often genuinely disturbing in a "dare I even turn the page?" sense.
We first see Billy, a young homeless woman, decorating a wall with a powerful piece of art. (She doesn't like the word "graffiti"). Short of cash for spraycans to finish the job, Billy has no objection to earning some money as a sex worker and so encounters Bradley; she will later wish she hadn't. It's not long before Billy disappears, and it seems the only person who cares about that is her friend Max, who's also homeless.
Symon's story is built around Billy and Max and, of course, Bradley.
Each is a powerful study.
Billy has encountered darkness and suffering in her short life, but she met them face on, with strength, her own goals in sight (such as the 'Pacifica Britannia ruling the waves' we see her create at the start of the story). Billy will soon suffer much more, and she will meet that trial with courage and hope.
Max has his own darkness, which we will learn much more about it in the course of the book: he has fallen, let people down and lost a lot. But there's a sense here of him as a moral force in this book - scabby, smelly and unappealing as many judge him to be (even the pimps and street gangs reject him). Max has a mission and he won't give up, but events will force him to revisit that darkness and the hurt he caused. Is it too late for any redemption?
Then there's Bradley. At the beginning Symon seems to suggest the reader may have some pity for him, squeezed as he is between a failing marriage and a bully of a boss. (Bradley's an overworked accountant in a white collar sweatshop). This is a very clever way into his character because as Symon's portrayal of Bradley develops, we begin to see that pity is indeed the key to him - but that actually it's Bradley's self-pity. That leads him to commit a terrible act, but it isn't anywhere near the end of what he might do. Like Billy and Max, Bradley is on a journey of self-discovery but it's a journey into the full darkness of his personality - and it's one he finds himself actually enjoying, a flowering of evil, as it were. I found Symon's exploration of Bradley truly enthralling, if often pretty repellant. (I would warn the reader that there are some really grim scenes here). There's a raw sense of male entitlement, of toxicity, to him and I began to wonder how far to trust his protestations that this was all an aberration and he wanted out. I mean, who carries bunches of cable ties in their car?
Symons very skilfully presents these characters. Bradley is a very vivid presence in the book, albeit a much less comfortable one. Billy's position means she is often reactive, but increasingly delves deep to finds ways to survive. Those often draw on her relationship with Max; while, because of the way the story unfolds we don't actually see Max and Billy together much, Symon is very good at portraying their relationship through remembered incidents, little kindnesses and moments of hope - and what Max tells others as he searches for clues about Billy's whereabouts, which also, gradually, reveals his past and shows how far he has fallen.
Written in short chapters and rapidly switching perspectives, Faceless has a real sense of urgency both in its style and pacing and in the competing drives of the participants. It kept me turning pages throughout. The themes are primal: escape, degradation (of self and others), redemption, strength, courage and survival. The tension fairly crackles off the page.
As you may have noticed(!) I really enjoyed Faceless, and I'd like you to, as well. A strong recommendation from me then and I'll be intrigued to see whether Symon's next book returns to the (relatively) gentler territory of Sam Shephard (which would be great) or continues in this more troubling vein (also, great).
For more information about Faceless, see the stops on the tour listed on the poster, and also the publisher website here. You can buy Faceless form your local highstreet bookshop, or online from Bookshop UK, from Hive Books, Blackwells, Foyles, WH Smith, Waterstones or Amazon. 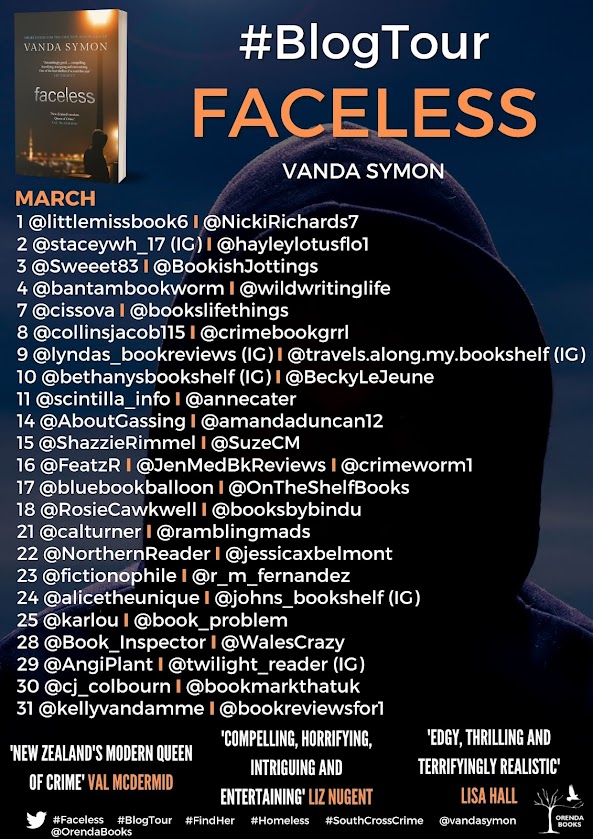