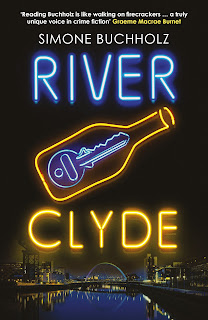 I'm grateful to Orenda books for an advance copy of River Clyde to consider for review, and to Anne Cater for inviting me to take part in the blogtour.
There's something about a river that just lends itself to introducing a place, don't you think? Or as a character, a situation, a mood? 'the river lies there like over a hundred miles of dead man' writes Buchholtz. Here comes Chastity Riley, sideswiped by grief, loss ('I think about my dead friend, Faller'), PTSD, call it what you will, after the events of Hotel Cartagena, making a very personal journey into the heart of (her own) darkness and also into her - and her family's - past.
Buchholz is really bold with this one. It's not a crime story. There's a little bit of a crime thing going on back in Hamburg (more about that in a moment) but it doesn't concern Riley so much as show up the effects of the dreadful blow that the group of friends has suffered. Rather, here, the moodiness, the noiriness, the silent scream which has haunted Riley through all these books, has now fully swallowed her, and it looks as though she's run off. But is she running from - or to?
So. Why Scotland? Why Glasgow? Well, it seems Riley's inherited a house from a distant relative, and she's come to take a look and decide what to do with it. But Riley being Riley, nothing is straightforward, so she gets off on a bad footing with the solicitor who's handling the estate, can't find the house and sets to exploring Glasgow's pub scene. She eventually locates the house through a man she meets in a bar, of course - Riley is most enthusiastic in exploring Glasgow's pubs. Indeed the book shows a familiarity with (and love of) the city - and not just its drinking dens - as our heroine orients herself. It's a different Riley we see from when in Hamburg where she's on familiar, if tainted, ground. In Glasgow, she's exploring, evaluating, assembling a relationship with the place.
As it is with her, for in this story Buchholz doesn't give us hard-boiled noir: there are sections in the voice of the Clyde himself, responding to Riley. There are time-slips, showing glimpses back into the lives that came before her and indeed condensing into a couple of pages what could form an entire family saga - a story of emigration, loss, disillusion, struggle that tells us a great deal about the woman she is. There are, too, moments that approach the ghost story though whether that is an objectively real ghost or a projection of Riley's tormented memories I really wasn't sure.
It's a kind of dark homecoming, Riley finally being forced - by the losses she's been through - do the work, confront the things, we've seen her shutting out all through her Hamburg life.
And, yes, we do meet the little circle of friend back there: Stepanovic and Calabretta are investigating a wave of outrageous arson attacks, the café is open for business but there is a hollowness, an uneasiness that was hinted at in earlier books but has now finally blossomed. They discover that they are, in fact standing too close to the Blue Night, which is not 'just any old pub, it's a place of yearning, it's the desire for old times, when everything was broken just enough, so not too much, not ripped to shreds'. Rocco and Carla are sitting at a pavement table facing realities:
'Perhaps Carla's not even this irresistible Venus fly trap but a pub beauty who's no longer in the first flush of youth. Maybe Rocco's not even this audacious survival artist, but a guy with gradually thinning, tousled hair, who's never actually completed a thing'.
Similarly, from the moment that Schulle, Brückner, Inceman and Anne Stanislawski are introduced 'lying on a colourful chequered blanket' in a park, we understand that all is not well. Buchholz is excellent at conjuring the spiritual malaise that has fallen on this vivacious, bawdy group of people but she doesn't present to offer answers to it. Perhaps, by the end of the story they're groping out of the dark, or perhaps not. Riley's still missing and her absence counts for a lot...
As ever, Rachel Ward's translation is glorious, interacting gleefully with Buchholz's text to give gems such as 'I love it, it's the opposite of innocuous small talk. It's enormous talk, and very nocuous indeed' and conveying the different moods of the various point of view characters - including a river. The result is glorious, haunting, sad, funny and breathtakingly readable. A great addition to the series and - if this is where it ends (I hope it doesn't) - a fitting conclusion.
For more information about River Clyde, see the stops on the tour - listed on the poster below - and also the Orenda Books website here. You can buy River Clyde from your local bookshop, or online from Bookshop UK, Hive Books, Blackwell's, Foyles, WH Smith, Waterstones or Amazon. 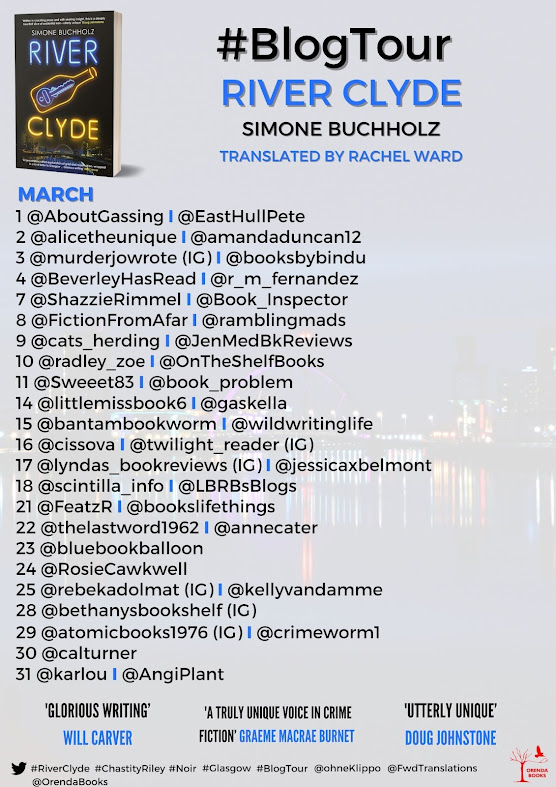