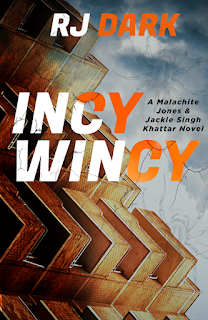 I'm grateful to the publisher for a free advance e-copy of Incy Wincy to consider for review.

After the events of the first book, Jackie has decided that Mal's psychic business needs rebranding as a detective agency. Of course, Mal gets no say in this, and the first he knows is when Jackie has a new sign installed over the shop. Cue a running gag where Mal says, in effect, I don't know, I'm not a detective and Jackie responds by citing the sign.

It's probably fitting, given Jackie's hand in creating the "agency" that its first case involves tracking down one of his mates (the "Spider" to whom the title nods). Spider is ex-army, like Jackie, and it turns out that other members of his squad live nearby and that understanding their past will be key to explaining what has happened to Spider. Similarly, Mal's earlier life as a homeless drug-user will also be relevant, not least in providing him with contacts to work (fairly likely that an ex-squaddie will end up among the street people, right?)

But it's not a straightforward case (which of Mal's cases ever are?) Pretty soon the usual pattern emerges as figures both familiar -  the 'Kray Twins', Trolley Mick, the town's Russian gangsters - and new - a smooth talking American - turn up at Jackie's shop to threaten him if he either won't give up a line of enquiry or won't take a side job. It gets more and more menacing, as Jackie can't be there all the time to defend Mal (and anyway, Jackie has bigger problems of his own). Mal's by no means a helpless victim in all this, he's actually a pretty shrewd and streetwise character, but the degree of peril in this book felt on a different scale to the previous one.

Add in Yorkshire's own racist front, a missing boy and a crop of UFO sightings and there is almost too much here to wrap one's brain round. Almost, I write, because Dark's story zooms along with brio, carrying us with no apparent effort from nasty fight to intriguing clue to dissecting the nature of the society that has produced Blade's Edge. There's some heartfelt, well argued criticism here, Dark comes across as really knowing his stuff. It's  very, very entertaining read, a book with a punchy plot, hard-hitting but humorous dialogue and developed, relatable characters.

Oh - and there's a climax that had me biting my nails.

I'd strongly recommend - you can buy the e-book here from Amazon.