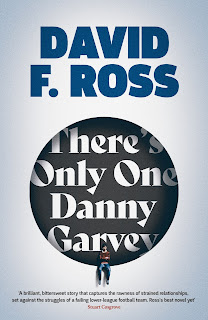 I'm grateful to Orenda Books and to Anne Cater of Random Things Tours for a proof copy of There's Only One Danny Garvey to consider for review - and for inviting me to take part in the blog tour.

I really shouldn't have enjoyed this book!

I'm not a great follower of football, which is a thing integral to the lives of the characters here, especially Danny and his "uncle" Higgy. Moreover, it's - designedly - obscure, lower league football taking place in the drizzle between tiny, lower league clubs in the unfashionable mid years of the 1990s, before the game turned into the slick money and marketing driven engine it is now. There's no glamour here.

But - I knew from Ross's previous writing - especially his Disco Days trilogy - how he can weave a spell, conveying the nuances of his protagonists' lives through their passions, whether for music or - as here - football. He could probably do it equally for stamp collecting or train spotting - a joke Danny would appreciate here. The utterly compelling writing succeeds totally in getting over that passion, in making it alive because, rather than despite, the flailing state of the central club, Barshaw Bridge, to which one-time high flier Danny has been called back in the hour of the team's need.

Bluntly, Barshaw Bridge is almost done, and Danny is its last hope. The club has been brought to its knees, or perhaps lower, by a combination of bad luck, stupidity, criminality and economics, but the tendency of its games to end as punch-ups didn't help. The description of the club's state is humorous and recalls the tone of the Disco Days books, but despite this and a couple of other moments, the mood of this book is generally much darker. Danny and his half-brother Raymond (neither of their dads stayed around long) had difficult childhoods, Raymond has been in and out of prison (he's currently residing at Barlinnie) and their mother, Libby, is dying. Danny returns to Barshaw reluctantly but with some idea of making amends: he ran out on his team on the eve of a vital cup tie, which they lost (it's a while before we discover why he did that), he is obsessed with the disappearance of a girl from his class in primary school in the 70s, and Higgy, who comes after him to return, is probably about the only positive figure in his life.

The story is told largely from Danny's point of view but - crucially - each section of the book is intercut with comments from another character - Higgy; Damo, Danny's nephew; Nancy, demo's mum (and Raymond's girlfriend); Raymond himself. They are generally brief comments, but enough to give insight into those people and insight into Danny himself. There's only one Danny Garvey? Rather, there are at least four, perhaps others besides.

Behind the football, then, behind the sinking town and its sinking club, is a web of relationships intersecting in Danny, which Ross slowly reveals. While this is quite a short book at just over 250 pages, Ross never gives the impression of rushing things. Rather we see Danny, Higgy, Nancy and the rest speaking for themselves and we sense - rather than being told - the kind of people they are. The distinction between the spoken language and the interior monologues reinforces this. The speech is mainly Scots dialect (and yes, fellow English people! It is perfectly comprehensible! Live a little!) while the "interior" stuff is pretty much standard English, giving the two aspects quite different voices. You might read the interior bits as having some kind of additional authority associated with being in a more "prestigious" dialect. Or you might read them as blander, more considered pronouncements contrasted with the vernacular used in the actual speech. There are so many shades of potential nuance here to be navigated by the reader trying to work out who and what, at a given moment, to believe.

There are also contrasts between three timeframes; the unavoidable "now" in which we're reading this story; the mid-90s - recent, but still a weirdly foreign time when pubs were filled with smoke and people bought newspapers; and the mid-70s when kids could be beaten in school and play out alone after dark. (A subplot concerning Damo, who is clearly a troubled child, in need of extra support which he isn't getting, struck this point home very forcefully. I hope that in the 2020s things would be a bit easier for his family). We range back and forth between Danny's adulthood and his younger days, as Ross deftly forges the chain of events leading to where things are, leading ump to Danny's reasons for wanting to put things right.

I don't think that, in the end, one can doubt his sincerity, but equally, as the story unfolds, I had a profound sense that some things bare etter left alone and that Danny might be rushing in where angels fear to tread.

This is a brilliantly evocative, captivating story, the more so for having moments so deeply sad that at times I just had to put the book aside. It is certainly a story that will remain with me, and one I continue to think about.

I'd heartily recommend it.

For more information about There's Only One Danny Garvey, see the Orenda Books website here. And take a look at the stops in the blogtour - see poster below.

You can buy There's Only One Danny Garvey from your local shop, if they're doing click-and-collect (or phone-and-collect, or email-and-collect). Or you can order online from UK Bookshop dot org, Hive Books,  Blackwell's, Foyles, WH Smith, Waterstones or Amazon. 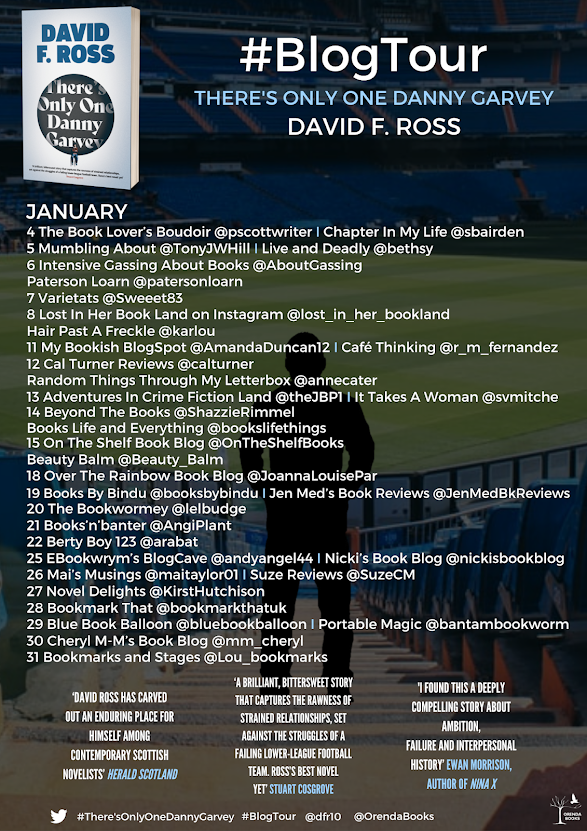