I'm grateful to the publisher for a free advance copy of Bear Head to consider for review - and for inviting me to take part in the book's blogtour (my first of 2021!) which opens today.

Bear Head is a sequel, of sorts, to Dogs of War, set several decades later and picking up some of the same characters but - and I'm proof of this - you absolutely don't need to have read the earlier book to enjoy Bear Head. To begin with, the situation that we confront here is new, and of itself. Tchaikovsky also gives all of the information the reader needs, and without a lot of intrusive info-dumping.

That said, I think readers of Dogs of War will be pleased to learn about the later career of Honey, the bioengineered bear. Honey is a sentient, intelligent bear engineered as a weapon but who has graduated into a life as an activist, international trouble-shooter and a regular on the conference circuit. (She's frustrated though that she is generally invited along to speak at sessions about "[thing] and bioengineering" rather than addressing her much wider competences and insights. The one time she goes off script, she ends up being shunned because she has stepped out of her assigned box).

We see glimpses of Honey's life in flashbacks, as well as hearing her side of things from an instance of her uploaded to Mars. Specifically, uploaded into the head of Jimmy Martin, a construction worker very definitely at the bottom of the heap in the giant building site known as Hell City where a crew of thousands (also bioengineered, to tolerate the thin air and intense cold - we're told that the only seasons on Mars are 'Winter and Very Winter') is building a habitat for future colonists. Originally an enthusiast and a hard worker, Jimmy's now sustained by regular doses of the drug Stringer, and therefore in the hands of crime boss Sugar - so in no position to refuse when Sugar offers him cash for hoisting a dodgy download.

But she doesn't know, any more than he does, what it will contain.

I loved Jimmy as a character. He's not dim, he's not bad, but he is isolated from most human life, has been done over so many times, and lives in such an extreme environment, that he's very focussed on himself. As the story gradually widens its, and his, perspective, he does grow ('I re-evaluate little Jimmy, because right now he is absolutely not thinking about finding a hole to hide in. He is thinking about what it's like for other people to go through what he went though only so much worse') and find other things that he cares about - surprising things in the end.

Jimmy's counterpart on Earth - the other main viewpoint character besides Honey - is a woman called Carole Springer. She is PA to the main baddie in this story, a monster of a man called Warner S Thompson. Thompson is easy to hate. A billionaire businessman, he is one of those sociopaths-in-a-suit we've all become familiar with over the past few years - a man with no empathy, no remorse, no scruples and yet a way with words. ('"You can't cut a deal with the man." Honey again. "I honestly don't think he has it in him to keep to an agreement the moment he gains anything from breaking it. I think that his personality went right into pathological liar and out the other side."') Tchaikovsky portrays Thompson at work quite, quite chillingly: the diction, all broken sentences designed to convince without saying anything that be can he held to, the harnessing of populist grievances with no intention of addressing the real causes, the general sense of life as a grift. It's deeply chilling, and indeed the book goes further, analysing Thompson and his ilk in terms of their being practically a parasite species, beings gifted at seeming more human than humans while in reality being much less, since they are all out for themselves. (Look for Honey's "game and metagame" discussion which is simply brilliant).

But I'm getting distracted. I was telling you about Carole. If Jimmy is the originally unwitting and totally unwilling host for Honey, then Carole is, sort of, the witting and willing host for Thompson. Not that he lives in her head, he doesn't need to. Rather he commands her life. He owns her, and she can't disobey him. Like many of those around Thompson she apparently desires and fears him, but nevertheless serves him heart and soul, anticipating his needs, facilitating them and strategising for him: 'she was just the girl who couldn't ever say no'.

That right to say "no" is an important theme in Bear Head, with the bioengineered animals threatened by the "collar", imposed mind control to keep them in line. Tchaikovsky explores various circumstances which support or underline that right - the economics of the company store, to which Jimmy owes his soul, bribery, different types of leverage, legal restrictions and, of course, the naked threat of force. All these are things that Thompson understands well and exploits as part of his ascent to power. Carole's role is to enable him, but also, perhaps, to witness. She has learned over years how to handle him but always in the cause of his ascent - there is literally nothing she can refuse, even up to his abuse of her body when he wishes and  his violence (there are a couple of painful scenes in the book that some may wish to skip).

So if the book documents the widening of Jimmy's sympathies in dialogue with Honey, it also examines Carole's inner struggle. Her situation is in many respects worse than his - both more constrained and more vulnerable. Arguably she's more culpable too and as we see what Thompson is willing to do as events escalate, that culpability only grows. Yes she suffers appalling abuse, and Tchaikovsky is damning here: 'a woman's bruises were usually invisible in the shadow of a powerful man'. Thompson is that man, the man we've all seen, able to boast about what he can get away with, knowing that for him, the music will never stop. So even if Carole's not a good person, she's not what he is (again, the book is very good on this extra level of manipulation, of calculation).

Expect moral complexity and challenge here, but also expect gut churning action and jeopardy and a story that's very much rooted in reality, driven in part by climate change (which the rich are busily seeking to buy themselves out of in part by riding the populist wave) but more deeply, driven by human nature into which Tchaikovsky shows some devastating insights.

Overall, a compelling and very involving (indeed, often moving) story about the best and worst of humanity (and other intelligences) which I'd strongly recommend.

For more about Bear Head, see the publisher's website here and also forthcoming posts on the tour which you can see listed in the tour poster.

You can buy the book from your local shop, if they are doing click and collect - they need your support! - or online from bookshop dot org, Hive Books, Blackwell's, Foyle's, WH Smith, Waterstones or Amazon. Signed copies are available from Goldsboro Books. 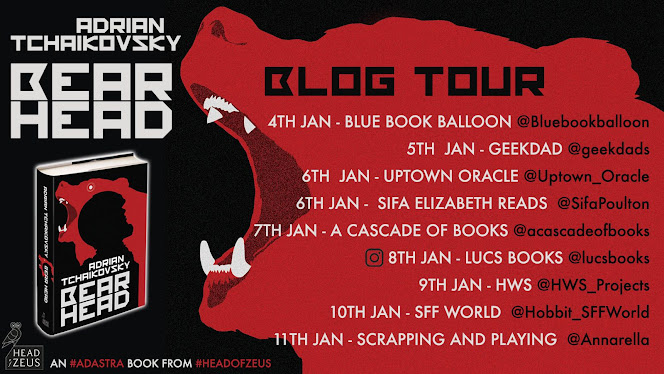 Email ThisBlogThis!Share to TwitterShare to FacebookShare to Pinterest
Labels: 2021, Mars, near future, SF