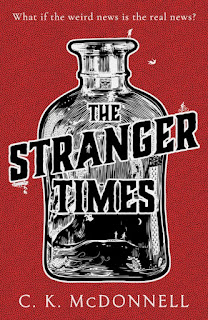 I'm grateful to the publisher for an advance e-copy of The Stranger Times via NetGalley. (I also have my copy on order from the local bookshop, because I need this one on my shelves!)

Is there a subgenre called "cosy urban fantasy"? If not, there ought to be. Not that The Stranger Times pulls its punches, oh no, we see some gruesome deaths here and evil is decidedly on the march, but still, there is that same combination - a strong sense of place, well defined characters and that slight twist of the absurd which I enjoy in cosy crime, an assurance perhaps that while there's a mystery to be solved and a real threat, other things are also important, or more important: office banter, for example, getting the latest edition of The Stranger Times to press, pursuing a good story for the lead. The characters need I think to be at home in some sense - to have found where they belong.

Before you can belong, though, you need to arrive and so for Hannah there's the little matter of a job interview... as this book opens, she is desperate for a job. Accustomed to a life of upper middle class luxury, she's alone, in unfamiliar Manchester, without money or friends, for the first time and desperate enough - just - to seek employment with the eponymous paper. We will find out what Hannah has done, and what's been done to her, in good time. First, she has to learn about The Stranger Times itself and the oddballs who staff it.

The paper glories in the weirder side of life: UFOs, hauntings, conspiracy theories and the like. ('Nessie is the Father of my Child'). Presided over by Vincent Banecroft, a former hotshot Fleet Street editor fallen on hard times who now looks like 'his own corpse waiting to happen', The Stranger Times may have seen better days, but it has ethics of a sort: they don't make stuff up, they don't judge, instead they report what people claim they saw or what they claim happened. The claims may be rather outré, but the obvious liars and sensationalist are weeded out and there's an integrity in the way that it recognises and reports things that are being claimed to have happened.

Nobody expects to wade into a supernatural crisis though, and indeed for a considerable time they don't realise that the bodies in the morgue with strange wounds, and the disappearance of a down-and-out man, have anything to do with each other. McDonnell allows the setting and personnel of the paper plenty of time to establish themselves. The staff - Hannah, Grace, Reggie, Ox, Stella and of course Manny, who prints the thing (he prefers to wear no clothes) are actually stranger than anything it reports. The grotesquerie at The Stranger Times was really entertaining and I enjoyed seeing the interplay between, for example, Grace, the fiercely Christian receptionist and drunken, foul-mouthed Banecroft. In parallel, we are told about a couple of villains who reflect the darker side of things and are clearly Up To Something. During this first third most of the action is with those villains, but what they are up to is still obscure. When things really begin to move along, and the team from the paper are fully in the firing line, they are well established and we really care what happens to them.

I won't say too much about the background that then reveals itself, except that The Stranger Times does (to a degree) follow the template of there being a "hidden" paranormal world that lives in tension with the mundane one - there's a balance that has to be kept and it is, of course, in danger of being upset. McDonnell does, however, bring a real freshness to the concept. The Stranger Times isn't about rivalries between clans of monsters or (much) about humans being drawn into their worlds, rather its's about individual motivations, greed, ambition, survival and the willingness to exploit others in pursuit of those things. As well as about the importance of getting the paper to press, come werewolves, police or rogue sorcerers.

Oh, and about integrity - whether in that mission to report what is being said, in the desire of DI Sturgess to give the dead their due by investigating every case meticulously, even the hopeless ones or in Grace's fierce love for tearaway Stella who broke into the paper's offices one night and has stayed ever since.

The group at the heart of the novel are eccentric, bickering and plain odd, but they have a fierce loyalty to one another which gives this novel real heart and soul. Combined with sharp writing ('Mason himself seemed oblivious to his own halitoxicity', 'Coppers often dealt with people who were having the worst days of their lives. That deserved somebody's best'), a strong plot and a good sense of place - the place being rainy Manchester ('predicting it was beyond the capacity of meteorological science') - that makes for a thoroughly readable and completely enjoyable story.

For more information about The Stranger Times, see the publisher's website here.