#Review and #Giveaway - Radio Life by Derek B Miller

I'm grateful to the publisher for a free advance copy of Radio Life to consider for review, and for inviting me to take part in the book's social media "blast" - see poster below for more details of that! I also have a giveaway - read on for details...

There's a lot I could say about Radio Life. Beginning with the basics, we are firmly in post-apocalyptic territory, though not a hopelessly bleak form of that as there is some organisation, there is trade, one may make a way of life. Some four hundred years from now (no-one is really sure, it was a pretty thorough apocalypse) a community calling itself The Commonwealth survives in the west of what is now the USA. Occupying the stadium from an Olympic Games held towards the end of the 21st century, they see themselves as seekers after the lost knowledge of "The Ancients", sending out "runners" and "raiders" to scavenge what they can from the ruins of the "Lost World". They store up knowledge in Archives, and work to understand what they've found - from musical scores to cryptic, and dead, electronics. The process of analysing these, lacking even basic knowledge, can seem bizarre, with both broad, top-down generalisations and shrewdly observed, detailed analysis.

Pitted against the Commonwealth are the Keepers, mysterious newcomers who believe that the old world is best left to itself. Surely it's dangerous to explore too far ('Trying to make the world better is what killed the Ancients') since this would only lead to a repeat of the earlier collapse - from which, this time, humanity might not survive?

The story is seen mostly through the eyes of Commonwealth people (citizens? members?)

There is Elimisha, a young Runner on a routine journey across the towers of the Lost World who stumbles into danger - and upon a treasure that no-one knew existed.

Lilly, in her 70s, who is one of the greatest thinkers of the Commonwealth - indeed, her discoveries led to its system for categorising all knowledge under six headings: Geography, Entertainment, History,  Arts and Literature, Science and Nature, and Sports and Leisure

Teenage Alessandra is the daughter of Graham and Henry, husband and wife and the Commonwealth's two most celebrated Raiders (at the start of the book they return to the Stadium having found Knowledge under all six headings - an almost unparalleled feat). The dynamic between these three is central to the book: Henry and Graham's deep understanding of and communion with each other, their love for each other coupled with recognition of where their service with the Commonwealth might lead, Alessandra's urge to match them.

It's Alessandra and Elimisha who perhaps most exemplify the Commonwealth's view of what it is and how it should be: stumbling on an incredible treasure of Knowledge ('Trove'), Elimisha quickly fixes her response to that in Commonwealth Protocols centred on the need, above all, to retrieve it and to protect it from others. This is now the central Archive of the Commonwealth and she is its Chief.

However, Elimisha is isolated, injured and trapped and can do nothing else but begin to analyse the information she has found, learning so much more about the world than any of her people, and inevitably meeting moral dilemmas in doing that. Throughout this book, I felt that Miller's depiction of the societies here - and in particular the Commonwealth - as being shaped, or perhaps I should say limited, by the information they held, was one of its great strengths.

Take warfare, for example. In the course of this story, the Commonwealth goes to war, and understandably their attitude and approach to this is shaped by the texts they have available, by what information randomly came down to them from Before: descriptions of Hannibal's campaigns, and Thucydides' histories, apparently some limited knowledge about various Twentieth Century wars (but as we will see from Elimisha's horror when as he learns more of the truth, this is very partial). Isolated from any tradition of scholarship or commentary, will these undeniably very bright people make anything useful of that knowledge or will it mislead and confuse them?

Similarly, when we come to the larger question apparently posed in this book - the great difference between Commonwealth and Keepers over whether to hunt for old knowledge or let it die - both factions are passionate about their point of view, but also very limited by not knowing what led to the catastrophe. It's hard to accord their dispute much respect when it is all based on speculation and generalities, but Miller helps us here by dropping the answer relatively early on, so we soon know the immediate cause. That might make the reader rather lose sympathy with one faction here, but it shouldn't - there is actually more going on in Radio Life than a simple conflict between an enlightened, civilising group and a bunch of destructive nihilists. To hint at this without being too spoilery: both of the societies here are limited by what they don't know, by what they don't see. Both are cramped by the biased and partial nature of what they do know. But isn't that always the way, for humanity? Isn't it just as true for us? What might we be missing which - in Miller's imagination - could lead us over the edge?

This is a very thoughtful, philosophical book, no less so for its arguments being dramatised in the conflict between the two societies and also in the internal politics of the Commonwealth (where firebrand Lilly often rails against the organisation and personnel she helped shape). Questions abound. Is all knowledge equally worthwhile? Are there truths which should be hidden, forgotten, or even suppressed? How to compare the value of a beautiful flower and a musical masterpiece? Which is more important? Can a society flourish if built on lies?

Miller makes all these, and more, into important, alive and, above all, open questions (the answers found by the protagonists being partial, provisional and possibly wrong).

The book is gloriously readable from its opening sentence ('Two riders trace the ridge of the sand sea, miles from the Commonwealth and the protecting walls of the Stadium') to the very end ('"Begin the Crossing" she says') and deeply involving - you care what happens to these people and their society! To that end, Miller hurls ideas, arguments and action at the reader, such an abundance of all three that I could imagine other writers deciding to make this a trilogy. There is one particular section, describing, in a few pages, epic events over a period of two years, which could have been a book itself, but rightly wasn't, I think. While more detail of what happens would be fun to read, the direction, the hard choices and the sacrifices have been made before this point, and they are what matters. The sheer density of material - the maelstrom of ideas we're exposed to - is part of the joy and challenge of Radio Life, and I loved it. I just loved it.

I said there would be a giveaway. I have, through the generosity of Jo Fletcher Books, a copy of Radio Life to share. If you would like a chance to win it, share this review on Twitter, tag me in, and comment with one piece of knowledge from our world you would either want to preserve for the Commonwealth, or prevent it from having. Either can be as broad ("all sport") or focussed ("no cats!") as you like. (You can also follow me on Twitter if you like but you don't have to!) (UK/ RoI I'm afraid).

I will pick a random winner on Saturday 23 January, and announce the result next week. Good luck!

You can buy, or pre-order, Radio Life from your local high street bookshop (check whether they are doing Click and Collect) or online from Hive Books, bookshop dot org UK, Blackwell's, Foyles, WH Smith, Waterstones or Amazon. 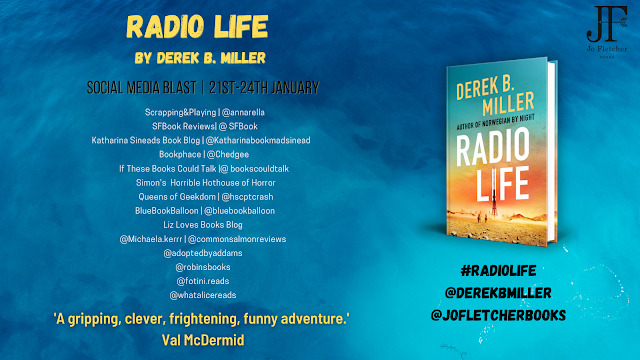