#Review - The Last Thing to Burn by Will Dean 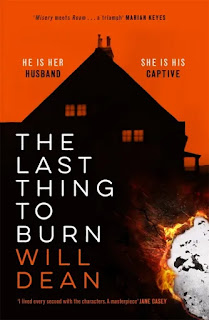 I'm grateful to the publisher for an advance e-copy of The Last Thing to Burn via NetGalley.

This is a scorching, claustrophobic and intense thriller that you'll want to read from behind the sofa, if that makes sense. Its protagonist, a woman everyone calls "Jane" ('My name isn't Jane') is in a desperate situation, robbed of her identify, her family and (almost) all agency yet possessing a steely determination to survive - for her own sake, for her parents' and above all for her sister, who will suffer if Jane ('My name isn't Jane') despairs and finds a way to die.

Thanh Dao - her real name - is from Vietnam. She and her sister were trafficked to the UK in a shipping container with 17 others (16 survived). While her sister works off the cost of her passage in a Manchester nail bar, Thanh Dao has been sold on to a brutish farmer called Lenn. They live alone in his ramshackle cottage on a great flat expanse of land which Len works. Thanh Dao cooks and cleans, obeying all Lenn's wishes - what to cook on what day, exactly how brown a sausage should be fried, how to meet his needs in the bedroom. When Lenn is displeased, even over minor things, Thanh Dao is punished - one by one, her remaining possessions are burned (she has few things left, a handful of things - everything else in the book is Lenn's (his food, his bed, his willow logs in his Rayburn stove, his keys, his house, his land) or his (dead) mother's (the clothes Thanh Dao wears, the cloths she uses because he won't provide her with tampons). She's under perpetual threat that if she runs away or even if she kills herself, her sister Kim-Ly will suffer for it.

It is a cold, violent and suffocating life, the wide horizons and open fields a cruel lie as Thanh Dao, often in pain, lives from day to day, sustaining herself by reading her sister's letters and an old dog-eared copy of Of Mice and Men. Her suffering is so intense, so unrelieved that at times this book is almost painful to read. That's even before factoring in the reader's foresight - which Thanh Dao shares  - that worse is in store. She's never allowed to leave the farm, not to visit the shops, to see a doctor or to chat with a neighbour. Len has cameras around the house and reviews 'the tapes' every night (chatting about the state of the farm) before punishing any failings (Was Lenn's pie a little cold? Has Thanh Dao neglected to paint over the mould spores in his bathroom?) and unlocking his TV to watch Match of the Day or the snooker. Doors are never to be closed in his house - if Thanh Dao goes to use his bathroom at the back, she must leave the door open. On that flat farm, as Len often points out, he can see the house from anywhere. Thanh Dao can't walk out - he's seen to that - she can't call for help and, as I have said, she can't even die.

I honestly don't know when I read anything as dark as this. Often, I didn't want to know what happened next, how bad things could get. At the same time, I had to know, I had to be there with Thanh Dao as she sustains herself with memories of home, her parents, joyful meals (she offers to make Lenn proper home cooked meals, to grow vegetables, herbs and spices - but he just wants what his mother gave him: build in the bag cod, and white bread, from the Spar shop, sausages cooked right, pies). I had to be there as Thanh Dao keeps her courage, carrying out tiny acts of defiance. I had to be there as, driven to ever greater lengths of desperation - things happen that raise the stakes yet higher - Thanh Dao somehow holds onto her sense of self.

The lines are starkly drawn; Lenn is a brute and an oaf, but a clever brute and an oaf. We know early on some of what he's done, and that's bad enough, but there are hints of worse throughout the book and even late in the story, more revelations of just how bad he is. At times, Thanh Dao is surprised by what one might see as small kindnesses. At times, Lenn complacently boasts that 'It's all right, ain't it, this life... We're warm, under decent roof, full bellies, together, not all bad, is it?' Does he believe this - even as he knowingly inflicts pain? Is he parroting something he's been brought up with? Somewhere in that bleak landscape, that house of horror, there's an answer, a reason, for Lenn and the reader understand that: but he's such a monster that one draws back, at the end, from wanting to understand that darkest of mysteries.

Certainly, Thanh Dao isn't taken in by a man whose answer to her toothache is to fetch his pliers from the shed. She is a woman at full stretch, a woman whose energy, focus and resources are completely committed to one cause - survival - with nothing left over. Or so she thinks - as things get worse and worse, Thanh Dao does find space in her heart for more, in glorious scenes (From nothing more than two women willing it to happen: two women, strangers, friends, forcing their own warmth together to make a family of sorts out there')' that just had me gobsmacked at Dean's writing, his vision and his empathy.

Yes this is a dark book but it's also often uplifting, a study of courage and endurance and even love. I knew that Will Dean could write - his Tuva Moodyson crime novels are glorious - but The Last Thing to Burn is just revelatory. You want this book, you really do.

For more information about The Last Thing to Burn, see the publisher's website here.