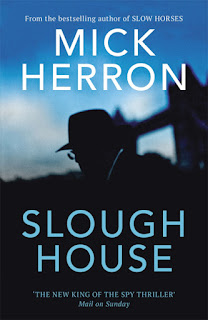 I'm grateful to the publisher for an advance copy of Slough House via NetGalley and also to Dave for sending me a spare ARC which he received.

Herron's Slough House series always sparkles, but this one was an especial joy to read. All the usual reprobates are here - River, still coming to terms with the death of his grandfather, hoping for clues of some sort from the contents of the OB's study. Roddy Ho, the most self-regarding and empathetically challenged IT whiz you ever met. Lech, with his self-scarred face. Catherine, sneaking drink home from off-licences and corner shops and then pouting it down the drain. Louisa. Shirley the Dancing Queen.

And Jackson Lamb himself, who seems to smoke so much you'd imagine it would be easier simply to pump it in from a tank.

The thing about this lot is they're supposed to be the Secret Service's 'Slow Horses' - the losers and also-rans who are still on the payroll to keep them quiet, but who can't, we are told, be trusted with anything important. As we've seen, though, in truth most are parked in Slough House because of who they've offended or what they are (especially, what they are - often, unmouldable into a conventional team, uncorporate, pig-headed or simply embarrassing) or simply because they have messed up and embarrassed the Service - not because they are incompetent or lazy. It's never stated in so many words but when they are called to action they can be formidable, and naturally they save the day.

This time though, things are a little different. Slough House, that standing joke, has apparently become so much of a laughing stock that it's been removed from the Service's records. And some of its ex-members are beginning to die off. That's the second thing that delighted me about this book - a bit more of the continuity in that we see what happened to some of those who dropped out earlier. (Spoiler: not all of it's good).

The third thing I loved was the delicate relationship that Herron's world has to ours, to recent events, especially You Know What, as he calls it - so I won't say it out loud. But You Know What. In his world, it has devastated Britain's alliances, robbed us of cash and influence and emboldened opportunistic populists. A useless, old Etonian PM has risen to power and he's being pressed hard by a "yellow vest" movement, determined to roll back progress and trying to get their hooks into the Service to advance that aim. Wholly unlike our own reality, of course, though you may feel that some of Herron's sharper darts strike home rather well, all the same.

The fourth thing (I should stop counting) I loved was the delicate tribute that seemed to be being paid at times to John Le Carré* and especially to his final novel, Agent Running in the Field. That book complimented Herron by borrowing the Slough House idea but also contained its own excoriating critique of You Know What. Here Herron repays the compliment both subtly - there are a couple of clever references to circuses; Regents Park, the Service's HQ, has 'database Queens' to match le Carré's 'register Queens' and archivist Molly, who oversees them, is a dead ringer for Le Carré's Connie - and through that central motif of exploring why we fight and whether the means adopted might render assumptions of patriotism, moral superiority and rectitude arguably moot. Certainly Diana, First Desk at Regent's Park, has got herself and her Service into some ambiguous places, even if prompted by the (real life) use by the Russian state of chemical weapons in the UK.

Jackson Lamb is of course your go-to man for walking on the dirty side of the street (not least because if he walks one side of a street, it WILL be the dirty side, even if it wasn't before). We cheer on this chain-smoking, foul mouthed, offensive candidate for a COPD ward because he has an authenticity and a morality that contrasts with all the smoother types here, even if he is just as, or even more, arrogant than them. And Jackson has collected his team of oddballs and no-hopers for a purpose, they're not just going to stand by and let things go bad or what wold have been the purpose of their, various, downfalls and exile?

If all the foregoing hasn't convinced you to read this book, I fear nothing may, but I can add more! This is a well, even deviously, plotted story, with a number of central mysteries that keeps the reader hooked right to the end. The wider roster of characters allows Herron to highlight both tenderness (River and one of the ex-colleagues) and amusing (Shirley and Lech) aspects of their relationships - a strength of course of an ongoing series, or at least it is if, as here, the characters are developed consistently and well. It is terrifically sharp, with many asides that are right on the nose. And of course it is very well written, as you'd expect.

*I know I'm breaking the First Rule of Reviewing here - to not directly compare the book with another - but it's meant as a compliment, I love seeing these two authors in dialogue with each other through their writings and it saddens me that it must now be a one sided conversation.