#Review - The Survivors by Jane Harper 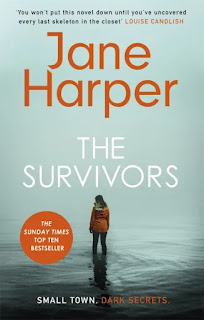 I'm grateful to the publisher for an advance e-copy of The Survivors to consider for review.

Having loved Harper's previous, Australia-set mysteries I was eagerly looking forward to The Survivors. It's just as atmospheric as them, with just as well drawn characters and an involving mystery plot, but Harper gives us a rather different sort of story - I love it when an author does a swerve like this!

In The Survivors, we visit the small coastal town of Evelyn Bay in Tasmania. It's a place dependent on tourism - busy and bustling in the summer with fierce competition for every parking place, deserted and quiet in winter apart from the keen divers who come out of season to dive the local wrecks. These are a notable local feature celebrated with a statue - the three Survivors of the title - at low tide to mark one particular disaster.

Kieran Elliott, his partner Mia and their baby daughter have come home to Evelyn Bay to help his mother Verity pack up their house. His father, Brian, is suffering from dementia and the time has come for them to move on. It's a bittersweet visit for Kieran, evoking old memories and regrets. Kieran, too, is a survivor - his brother drowned more than a decade ago, on the night of the worst storm in living memory. Kieran escaped, but with a sense of guilt - there are those that blame him for his brother's death, and more besides.

All of this is simmering beneath the calm surface of Evelyn Bay, until the death on the beach of a young woman, Bronte, makes a collision with the past unavoidable. The secrets of Evelyn Bay will be exposed and no-one may ever be the same again...

I would say this is a rather unusual crime story. The central character, Kieran Elliott, is neither a detective seeking to solve the mystery, nor a man accused of some crime and trying to clear his name. (Well, I say that - but while he is held responsible for a death, it's not the one that's central here, and he already blames himself). Rather, Kieran is - more or less - minding his own business,  trying to resist getting drawn in and having the past reexamined. There is a detective here - DI Sue Pendlebury, brought in to oversee the local police - but she, and they, are pretty remote, which Harper shows by having them observed by the townsfolk: seen from afar on the telephone, searching a house or striding on the beach. We're shut off from the investigation. Pendlebury and her team are apparently search for something but we don't know what, or why. I think it's only in the last quarter or so of the book that Kieran even talks to her for any length of time.

Rather than the investigation, the focus is on Kieran's tense relationship with his mother, clearly one of those who blames him for his brother's death, and on the web of friendships and former friendships between men - mainly - who grew up together in Evelyn Bay. That's intercut with Kieran's sense of guilt, the disintegrating situation with his father and the additional stress all that places on Kieran's relationship with his partner, Mia. From a certain point of view, despite the death early on, relatively little happens in the first half of the book as Harper follows Kieran and Mia around the town, using them to explore its personalities and their connections and to convey the atmosphere of the place - peaceful and calm, but with something of an undercurrent.

The townsfolk are determined that Bronte's killer must be a stranger, not a local, but there is a sense of something darker behind Evelyn Bay's happy-go-lucky, blokes image. There's malicious chatter on the town's Internet forum. Kieran himself reflects (as he strides confidently along the beach) that he's in no danger, is he? 'Whatever else might come the way of grown men, they didn't wind up strangled to death in the surf'. We hear of boy - among that group whiling away the sleepy summer months, year before - who seduces a girl to get back at her boyfriend over a business dispute. And, most chilling of all, it's not the first time that a young woman has come to grief here, is it? It all gives the impression that a young woman's life may not be of much account.

There is, then, a powerful tension between the urge to uncover secrets, explore and explain the past and thereby, perhaps, find resolution, and the attraction of  pushing the blame elsewhere, pinning it all on some unknown stranger, and getting back to business as usual. Those competing pressures meet in Kieran himself, and possibly his family, whose lives, since the storm, are almost a microcosm of Evelyn Bay.

It is all coming to a climax, but what will be revealed, and who will pay the price, is anybody's guess.

The Survivors feels, as I said, like a rather unconventional crime novel, but it is an absorbing and thought-provoking one, with themes much wider than merely identifying a killer. I'd recommend.

For more information about the book, see the publisher's webpage here.