#Review - The Lost and the Damned by Olivier Norek 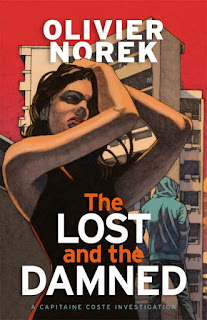 The Lost and the Damned (The Banlieues Trilogy, 1)
Olivier Norek (trans Nick Caistor)
Maclehose Press (Quercus), 12 November 2020
Available as: HB, 304pp, e
Source: Advance e copy via Netgalley
ISBN: 9780857059628
I'm grateful to the publisher for an advance e-copy of The Lost and the Damned via NetGalley to consider for review.
Content warning: this book does depict some very unpleasant events, both instances of torture and sexual assault. I don't describe these in my review below.
The Lost and the Damned is an explosive police procedural/ thriller, set in Seine-Saint-Denis, one of the scuzzy northern outskirts of Paris. The place is all tower blocks, dereliction and the camps of refugees and outcasts. It's not a tourist district or a smart shopping quarter.
Here, Capitaine Victor Coste is about to lose one of his most experienced officers, fleeing the city for a quieter life in the country, and to gain a new recruit in his place. This happens just as a perplexing series of murders begins - murders with a hint of the supernatural, murders that seem staged, with the Press informed of every detail. At the same time, Coste starts to receive anonymous letters, pointing to something rotten in his own department.
I loved this book - the characters, the seedy atmosphere, the air of cynicism. Coste is an honest cop, as these things go, but he's living in a very dirty world and it's impossible to pretend that all is well. Sometimes corners have to be cut. But we know - Norek uses several viewpoints in this book - that Coste and his team are crossing paths with monsters whose depravity would astound even him, world-weary detective or not. Stumbling around in the same maze are a crusading journalist and a hard-bitten PI. Each has fragments of the story, but very different interests.
It's an enjoyable book on several levels.
There is the unfolding of the devilish events - events Norek takes his own good time to trace to their roots. There is the depiction of Coste and his team (in which I include pathologist Dr Léa Marquant, who clearly fancies the pants off him only he doesn't realise). They are real characters with foibles and a true sense of a shared history. Introducing them through the arrival of Johanna, the new member, gives us an outsider's view of the squad on which Norek then builds with deeper insights.
Also vividly portrayed is Seine-Saint-Denis - almost a character in its own right, lovingly (if that is the world - it's a grim place) described and explored. The cop's-eye view (Norek is a former police officer) is unsentimental, but still manages to be both empathetic to the the plight of those who wash up there and knowing of the political shenanigans that make that plight worse.
Re-reading that last paragraph you might doubt my use of the word "enjoyable". This isn't, as I have said, "nice" Paris, "tourist" Paris, "smart" Paris. But it feels real, it tells a truly gripping story and it makes you care about the people there.
Nick Caistor's translation is open, readable and strikes a good balance, I think, between retaining the sense (for an English reader) that this is a book about a foreign and different place and making the text familiar and readable.
I'm very glad this is the start of a trilogy, I am looking forward to meeting Capitaine Victor Coste and his team again.
For more information about The Lost and the Damned, see the Quercus website here.
Email ThisBlogThis!Share to TwitterShare to FacebookShare to Pinterest
Labels: 2020, crime, France, Paris, police, Thriller