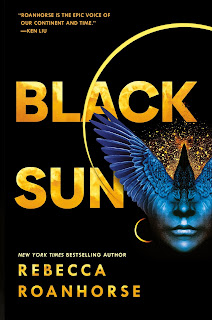 Black Sun
Rebecca Roanhorse
Rebellion, 21 January 2021
Available as: PB, 400pp, audio
Source: Advance e-copy
ISBN: 9781781089477
I'm grateful to the publisher for an advance e-copy of Black Sun via NetGalley.
I have an on-off relationship with epic fantasy. Done well, it can excite, move, and entertain me, as well as providing the perfect setting to test conceptions of duty, loyalty, love, endurance and more.
But so often we go to that world - you know it, that world with animal skins, snow, nobles and hordes. And I'm so wary of that place. But I will look up for a fantasy that happens somewhere else - and happily, there are more and more of these, like Roanhorse's. And, also happily, I know from reading her Trail of Lightning and Storm of Locusts that she is a cracking writer, which is proved again in Black Sun.
The book hinges on an event referred to as "Convergence", with each chapter dated in relation to it - whether years or mere days before. What it is, and why it's important, are only revealed slowly, although you will quickly guess that the characters we meet will come together then.
There is Serapio, who we meet first as a boy, about to undergo a cruel rite at the hands of his mother. We see this, then follow his life after as he grows into a strange purposes. There is Naranpa, high priest of the Sun. She's low born, trying both to establish herself in her role and to restore what she sees as the lost glories of the office. And there is Xiala, a ship's captain. We meet her first in jail after a drunken episode with somebody else's wife.  Xiala was for me the easiest characters to get along with. She has a contempt for those who don't go to sea ('indwelling bastards, all of them') and at first, it seems as though she wants nothing much beyond a ship to sail, a drink, and company and her adventures are immediately readable with little need to understand any background.
Roanhorse does, however, give Xiala plenty of background (There was something else deeply wrong with her, something she had no desire to examine with any rigour...'), an origin and abilities that mark her out as different and suspicious and discovering exactly who she is and what it means as she - almost, perhaps - falls in love with the mysterious passenger who's booked on her ship is both intriguing and actually moving. There's a definite current between the two, a taste of an attraction that can't be, less because of what they are than because of what her friend must do, the duty he sees upon him.
I found Naranpa less easy to relate to initially, and partly because she seems in such high peril - nominally in charge of the Watchers, the orders of priesthood (healer, assassin, historian and oracle) in their ancient tower, but surrounded by danger and somewhat hapless in its face. I suspect the time for her to really show what she's made of won't come till another book, but even so, Roanhorse again weaves a convincing and complex background for this character - a rise from the impoverished district of the Maw, a brother who's one of the local crime bosses, the sneers and condescension of the Sky Made clans.
Those four clans, with their totem animals and their rivalries, the gods served by the four orders of priesthood, the fantastical city of Nova in which all live - a city of deep rocky gorges, mesas and caves, bound together by a skein of top bridges - the games of chance, the clothes, the ships made from reeds and the astral navigation of the captains - make for an unforgettable setting to Black Sun. Drawn from pre-Columbian America, this all pays tribute to the sophistication of those societies, in the service of a story that hits all those notes I referred to above. Different conceptions of duty - Serapio's, Naranpa's - colliding with the realities of life and of love. Endurance, both of suffering and of injustice - with a flame of hope for vengeance kept burning. Characters juggling inner and outer lives, personal flaws, secrets and desires. And with a clear-eyed view of some of the classic schemes and setups: 'They promise you a saviour, but that saviour ends up eating babies or kicking puppies or something, and the poor gull who's the prophesied one ends up dead.'
Skillfully blended together by Roanhorse, all this comes together in a compulsive story that I simply didn't want to end. This is a series I know I'll eagerly follow, and I'm counting the days till the next part is out.
For more information about Black Sun, see the publisher's website here.