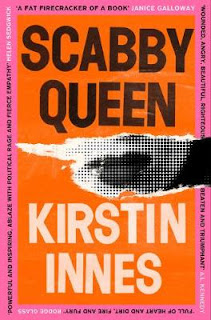 Scabby Queen
Kirstin Innes
4th Estate, 23 July 2020
Available as: HB, 385pp, e, audio
Read as: PB advance copy
ISBN: 9780008342296
Snap verdict: Just wow!
Scabby Queen is a beautiful patchwork of a book, told from multiple points of view and in multiple ways, covering a period of fifty years. It's a maze, a kind of intellectual (and emotional) pinball machine, bouncing back and forward, sometimes predictably, sometimes not. But it does all fit together - and the impact isn't so much from the glittering, zinging concept as from the warm, intimate, portrayals of people and relationships which Innes does with aplomb.
The book is about Cliodhna (Clio) Campbell, musician, activist, resident of a squat, Twitter warrior, a shooting star who blazes through peoples' lives to varying effect: inspiring, exasperating, exhausting. The one thing you can't do is ignore her. Springing to fame in the early 90s with her anti Poll Tax anthem, Rise Up! she's then written off as a one hit wonder but comes back again and again.
Clio's life is seen mainly through the numerous women and men who she touches. Some of the encounters are one offs - a nurse in a hospital, a passenger on a train - while some repeat (journalist Neil, Sammi - an ex-comrade in a Brixton squat and later in other settings, Clio's dad's friend Donald). Some are wholly positive: others reflect a wariness both on Clio's part and on those whose lives fall into her orbit. It sounds complicated (and must have been fiendishly difficult to write) but Innes orchestrates everything with great skill and the book carries the reader along through highs and lows, revealing, concealing, stripping layers back, adopting different viewpoints to give new perspectives on all these same relationships - and an ever richer, ever rounder, view of Clio herself. The book is  restless, like Clio, a woman who compels attention even in death: Scabby Queen opens with her suicide - not a spoiler, we learn this almost immediately - but mostly revels in her fierce and blazing life.
There are surprisingly few occasions in which we see Clio gives her own perspective: a desperately sad monologue to her husband as their short lived marriage folds; a self-justifying email; a couple of impassioned speeches. Apart from these we're left to build our picture of Clio from those around her - those who love and those who hate her. It's not a simple picture, but we get a powerful image of a charismatic woman, always in motion, always seeking. She has a hard time, with a fractured family background and an entry into the music industry at the height of the Loaded culture. (There are a few convincingly sexist articles by ubiquitous journal Pete Moss - wasn't that the name given to a prehistoric body found  in a Cheshire bog? That seems just about right.) There is also a touching scene where Clio tries, unsuccessfully, to warn an up-and-coming young female singer of the dangers (though it's very do-as-I-say-not-as-I-do).
It's a typical scene for Clio, who would I think say if you asked her that she tried to live a life in solidarity. Of course that's easy to say - but life is messy and there are plenty of examples here where Clio's solidarity is misplaced, unwelcome or just badly timed. Innes ranges wide, following Clio's campaigning career. We see Poll Tax protests, Iraq war protests, the Scottish independence referendum, a squat in Brixton, weddings, parties, parties and more parties and the backstage view of band tours. There are so many stories here, so many threads - it isn't only Clio who comes to life but a host of other characters as well, with their regrets, traumas and compromises - and a whole generation of political activism (I loved the portrayal of the nurse who had come alive with the Referendum campaign). The book has a sharp eye for detail. There are insights on the politics of smoking, the class implications of presenting oneself well (it's OK for middle class crusties in a squat to look untidy: the working class, at least working class women in the west of Scotland circa 1990, can't afford it. Being allowed to be scruffy is just another manifestation of privilege), Clio's accent shifting from one social setting to another, and the differences in the way that women and men living unconventional lives are judged (the women will be judged, the men won't).
That, in the end, is at the heart of this book. There's an unspoken question, a judgement, hanging over Clio throughout - how would a man doing similar things be seen? Clio is constantly assessed, measured, weighed up by everyone around her - even those who are devoted to her - in a way that the men doing similar things aren't. Even men who do worse - awful - things (the book gets very dark in places).
Clio gets frequent criticism. I suspect in real life she'd often be very annoying (ask Xanthe or Sammi) and she makes terrible mistakes. She is impulsive, she isn't following a plan and she sometimes scorches people who get too close. She is, though, in the end palpably, a person of integrity. And many near her, palpably, aren't.
Scabby Queen (the story refers to a card game which stands as something of a metaphor for Clio) is often sad, a story of missed chances, no, expired chances, a story of time bearing things away before we even know they were there (the backwards and forwards between the years makes this very poignant, giving us endings and beginnings commingled). It's also, and paradoxically, often gloriously uplifting.
An enthralling book both creating a vivid portrayal of Clio and committing a wonderful hack into the backstage, backstreet underpinnings of the last three decades. Never sentimental, but with a whopping emotional punch, Scabby Queen is a great read.
For more information about Scabby Queen, and an intro from the author, see the 4th Estate website here.
Email ThisBlogThis!Share to TwitterShare to FacebookShare to Pinterest
Labels: 1980s, 1990s, 2000s, 2020, Feminism, music, Politics, Scotland