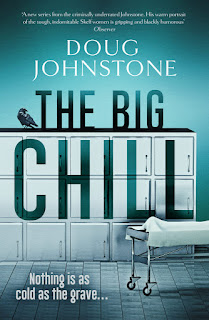 I'm grateful to Anne at Random Things Tours and to Orenda Books for an advance copy of The Big Chill to consider for review and for inviting me to join the blogtour.

The Big Chill sees a swift, and welcome, return for the three generations of women in the Skelf family who run an undertakers/ detective agency in Edinburgh's genteel South Side. It may only be the second book in this series (after A Dark Matter) but I already love Johnstone's intricate, character-driven stories about grandmother Dorothy, daughter/ mother Jenny and granddaughter Hannah. And it's not only that I love Edinburgh, that Hannah is studying at my old University and Department, and that I used to live a stone's throw from their base. No, these are well observed, emotionally resonant stories built on the lives of three strongly-drawn, complex characters.

It's well established in detective fiction that there must be a death, preferably several, and these books are no exception. These deaths are not simply a puzzle to be solved but windows into unknown lives, lives which will then be explored and exposed.  Johnstone's setting, however, means he can use his fictional undertakers to deliver this while subverting expectations, giving us many, many deaths - without them all being crimes to be investigated. At a stroke, he polishes away the flaw of this genre - the unlikely number of murders, and the creation of (often women) victims - without lessening the mystery element, which comes both from the lives of the Skelfs' clients and their own emotionally complex lives.

A young man driving a stolen car who gatecrashes one of the firm's funerals and ends up a client.

A teenage girl - one of Dorothy's drumming students - who vanishes and whose parents seem curiously unconcerned.

A widow finds, after this death, that her elderly husband had secrets.

Then there are loose ends from A Dark Matter for Dorothy, Jenny and Hannah. Hannah, in particular, is very traumatised by what happened in the earlier book (I will try not to spoil that for you if you haven't read it, but in return I'll expect you to go and read it NOW. OK?) I liked the fact that things aren't just reset from one book to another: Hannah is really struggling, showing signs of depression and trauma. For much of the book she's in pain, knowing that her behaviour is perhaps driving away girlfriend Indy but unable to stop (and consequently also burdened by guilt about how she's feeling and how she's treating Indy).

Dorothy and Jenny have regrets too, and there is the matter of Jenny's ex-husband Craig, a chaotic and threatening presence who should be off the scene but still looms large.  As we learn more about him than was spelled out in A Dark Matter, he assumes the character of the self-regarding, entitled man, obsessed with control over "his" women.

The story is told from the viewpoint of each of the three women as they go about their business, investigating one or more of the mysteries, preparing for funerals and, in Hannah's case, seeing her therapist or trying to keep up with her physics course. Johnstone writes each to see the world in a slightly different metaphorical way: so Hannah ponders on the eventual heat death of the universe (the "Big Chill" of the title) or wonders about quantum immortality, while Dorothy retreats to her drum loft and memories of her childhood in California.

And Jenny - well, Jenny gets in a punch or two at Craig though that proves to be a mistake...

As I said before, I love these books. I love the minutiae of the women's lives, the human-sized mysteries on which they test their detective skills, the frank acceptance of death as a business (Johnstone spent time at an undertaker's and gives us lots of info about the business). I love the easy familiarity with Edinburgh, the memories that Jenny, in particular, triggers as she moves around the city. And I love the sense that despite the pressures, the three will be there for each other.

They're delightful books, filled with light, humanity and love - even amidst the corpses and embalming fluid. I hope this series lasts for many many more books.

For more information about The Big Chill, see the Orenda website here.
You can buy The Big Chill from your local bookshop, or online from Hive Books (who support local shop(s), Blackwell's, Foyles, WH Smith, Waterstones or Amazon.

The tour continues! See the poster below for details of the marvellous reviews and features coming up (as well as the ones already out there). 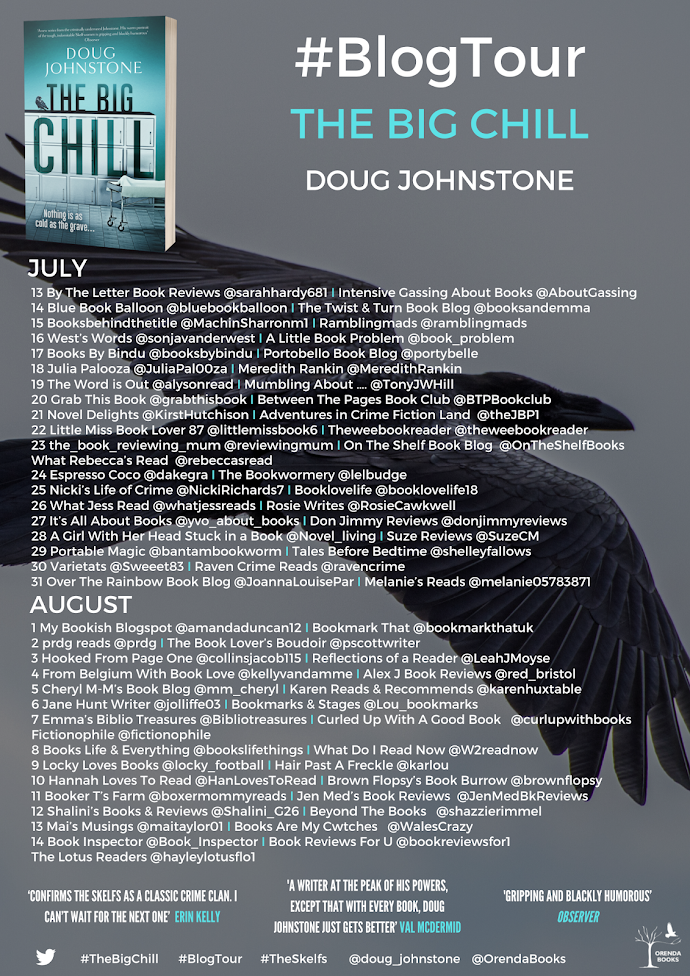