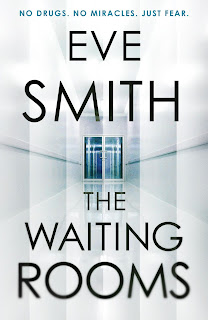 The Waiting Rooms
Eve Smith
Orenda, 9 July 2020
Available as: PB, 378pp, e
Read as: PB advance copy
ISBN: 9781913193263
Today I'm joining the blog tour for the timely near-future thriller The Waiting Rooms. I'm grateful to Orenda Books for a gifted advance copy of the book to consider for review and to Anne Cater of Random Things Tours for inviting me to take part.
I have to say this is the most on-point topical novel I'd read for a long time. While it's clearly unintended - who would have known? - much of the setting, this would have seemed chilling and strange when written, has turned out - well. Chilling, but perhaps not so strange.
In a near-future world, extreme precautions are taken to avoid infection. Facemasks are work routinely. We see one of the protagonists, Kate, a nurse, clean and disinfect herself before she can leave the closed ward. Hand sanitiser features. Special measures are taken with the elderly, whether in hospital or care home. I spotted a reference to the R-number! It must have been strange for Smith to see this imagined, different world come solidly real - even though part of the point of the book is, I think, to warn. 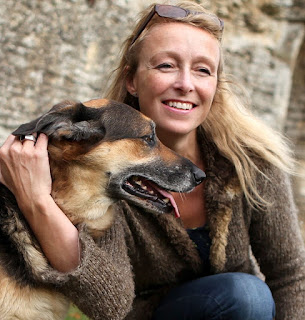 This isn't actually a world menaced by covid-19 but by multi-drug resistant (and, I think, aggressively mutated) strains of bacteria. As part of the desperate measures necessary to eke out the remaining antibiotics, the over-70s ("elderly") are denied these drugs, making routine operations impossible and minor injuries almost always fatal. As the end nears they are removed to "Hospitals for the Elderly" where the only treatment is pain relief, and for those who have signed an advance directive, euthanasia. Kate works in one of these places, her job taking its toll.
The other main character who we spend time with is Lily, a woman approaching her 70th birthday - a bittersweet age. Lily reflects on her life and lost love, her memories taking her back to South Africa just before the end of apartheid and to her relationship with a married man, Piet. As we go back and forth we gradually learn that Lily has secrets, that she has been notorious and may still be hated by some. The unfolding of this story and the place that Kate has in it is well down, the truth being revealed slowly but with plenty of clues for the elate reader to work out what's gone on. The portrayal of Lily is I think excellent - she has guilt and regrets but remember s happy times - and it's good to see a main character who isn't young, indeed who is suffering form the effects of age yet who is still determined to control her own life and destiny.
Kate is remarkable too: also the focus of hatred and protests gather against the treatment of the elderly, also prone to guilt and hit by grief but equally determined to do her duty and give those entrusted to her care as gentle an end as she can. There are also mysteries about Kate and both women, to a degree, play detective - they are entwined in the story of their times, which may be different from what is generally believed. The relationship between Kate and her daughter Sasha is tenderly and I think truthfully described, Kate's husband Mark being less in focus: this is a book where relations between women of different generations are first and foremost, Smith taking the space to develop their characters and to come back and back to the same dilemmas of loss, grief, love and guilt again and again form different angles, each time adding something new to the rich layer cake of this excellent book.
Behind it all is an urgent message - we are facing a crisis of antibiotic resistance. The way that the business of drug development is set up means it's more profitable for the drug combines to provide medicines for chronic - long term - conditions (cancer, heart conditions) than new antibiotics. The antibiotics will be used sparingly to preserve their effectiveness: drugs for chronic conditions will be used long term. At one point this is discussed in the book and someone, Piet I think, says that what's needed are tax incentives - well there are tax incentives (I designed some of them!) but it doesn't change the commercial realties. And meanwhile, in a perfect example of natural selection, the bacteria that survive to pass on their genes are those the antibiotics can't kill, and so it goes. This is a problem I learned about when I did A level biology - I won't tell you how long ago that was, but it's long enough that something should have been done by now.
I hope that the strange, and slightly scary, coincidence of this book's publication with our current pandemic situation - and again, as you see the sequence of events described here, from concerts blamed for seeding the drug resistant strain of TB to an order from the Prime Minister to stay at home, and subsequent economic collapse - will focus minds, because they need to be focused. I'm sure Eve Smith wouldn't have been expecting to be writing a book quite so timely in one sense, even as she clearly knew - read the research cited here - how timely it would be in quite another.
All in all an important, serious book but also an absorbing one with a tremendous emotional thump - as I read the final part I think I got something in my eye - and one I'd strongly recommend.
For more information about the book, see the Orenda Books website here. And read the reviews! There is more to come on the tour and some cracking reviews already out there. See the poster.
You can buy The Waiting Rooms from your local bookshop (who really need your business right now) or online from Hive Books (who support high street bookshops), Blackwell's, Foyles, Waterstones, WH Smith or Amazon. 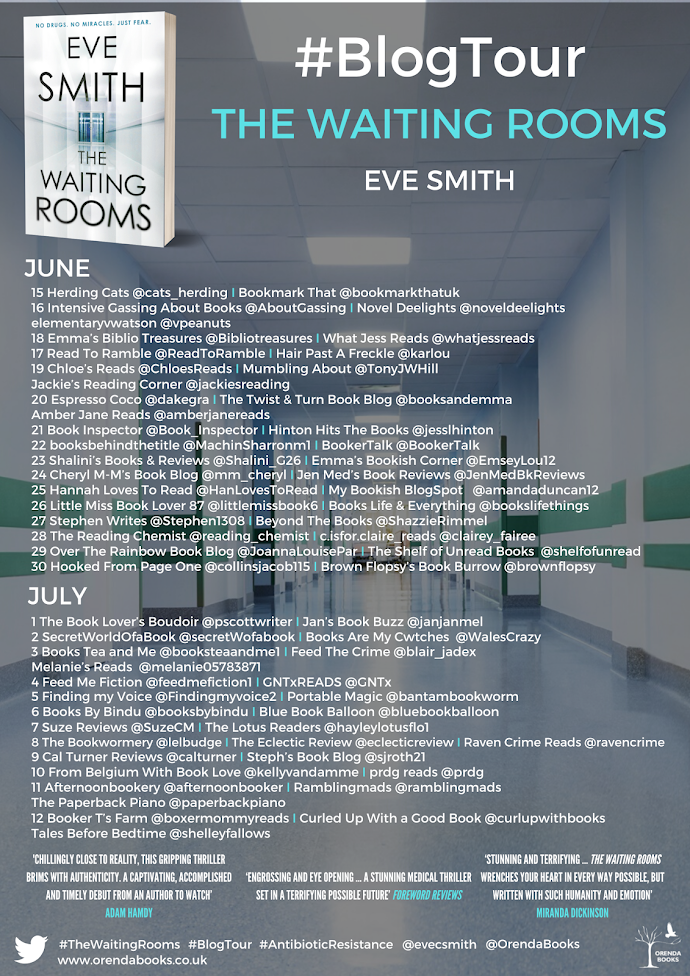 Email ThisBlogThis!Share to TwitterShare to FacebookShare to Pinterest
Labels: 2020, Thriller