Review - Random Sh*t Flying Through the Air by Jackson Ford 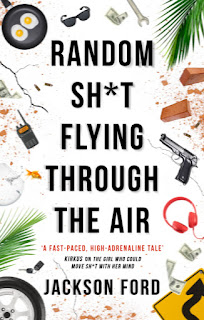 Random Sh*t Flying Through the Air (Frost Files, 2)
Jackson Ford
Orbit, 9 July 2020
Available as: PB, 502pp, e, audio
Read as: Advance e-copy via NetGalley
ISBN: 9780356510460
I'm grateful to the publisher for an advance e-copy of this book via NetGalley.
Whew. What a chase...
Random Sh*t Flying Through the Air (the asterisk is part of the title, not censorship by me) is a welcome return to the messed up LA of Teagan Frost. This book is the second in the series, following The Girl Who Could Move Sh*t with her Mind, in which Teagan's already bizarre world was turned upside down and one of her closest friends killed. Do stop and read that first if you haven't, because there are some major spoilers for the first book here.
Still with me?
OK, well, if you have read Girl you'll know that book was basically A Bad Day for Teagan Frost, and so you won't be surprised that Teagan is about to have Another Very Bad Day at work. If you think your working life has been hard over the past few months, then let Teagan show you just how much worse it can get. Of course, to match her, you'd have to have psychokinetic powers courtesy of experiments on you by your parents; to have been arrested and imprisoned in a Secret Government Lab; and then to have been released on licence, with the condition that you use those powers For Good as part of a team disguised as furniture removers, who break and enter, plant bugs, and retrieve all sorts of dodgy stuff for said Government.
In Random Sh*t the impact goes wider than in Girl, placing Teagan's beloved city of LA in danger (and indeed, the threat goes further). This is in many respects a more focussed story than the first one, essentially a chase in which the China Shop, the cover name for Teagan's team, receives blow after blow - while still not having recovered from the events of the first book - even as they're needed more than ever.  All the time, they must keep on the trail, against a ticking clock, hampered by the chaos that's already been caused, tired, hungry and depleted in numbers.
Ford limits the viewpoints here, keeping the story very simple and very intense. We see Teagan's extended (and increasingly frantic) narration, and those of the two antagonists, and that's just about all - but this allows Ford to spend a lot of time developing their characters. Teagan is, as before, a mass of contradictions: still mourning Carlos, despite what he did to her, ambivalent about boyfriend (or not-boyfriend?) Nic (I don't like Nic. He's not the man Teagan needs.) She is impulsive, swears (a lot) that she's relaxed at and reconciled to her messed up life history (she's not) and still dreaming of opening that restaurant. She tends to treat all those around her very badly, and is given a few home truths, but it's hard to hold it against her, especially given the pressure she's under here
The two people that Teagan and her crew end up hunting... I don't want to say too much about them. There's a complex relationship there. One of the two is a young boy, albeit a gifted young boy, and Ford captures that perfectly, I think: the transitions from vulnerability and need to howling monsterdom (that's any young child but the circumstances here add a new dimension of menace to his tantrums).  The other is his mother, who's definitely had the dirty end of the stick in life and again, I think the mixture of love, roiling guilt, the absence of perspective, were all very true to life for a parent of any young child: with an added dimension here.
The story is, as I have said, basically a chase. Time is running short, and disaster looms. We know from fairly early on what the stakes are, so there's little mystery. Rather, the tension comes from the volatile mix of characters and the roles they're cast in. Teagan, who faces an awful moral dilemma. Annie, who's been hurt badly and wants revenge. The boy and his mother. The friends and relatives whose location is unknown due to a catastrophe feature, not part of the story but exerting a pull on everyone, distracting attention and energy. It's a very well imagined, scary portrayal of a disaster and the very human reactions to it that you'd get.
Behind all this, Ford IS advancing the deeper premise of these novels, with some new facts revealed and a couple of characters coming onto the scene who I'm sure will appear again - enigmatic German tech billionaire Jonas Schmidt; the mysterious Director; and more. Together they hint at new directions for China Shop, new enemies and allies perhaps and - worst of all - new emotional blows for Teagan, as if the poor woman hadn't already been through enough.
Just can't wait for the next book...
For more information about the book, see the publisher's website here.
Email ThisBlogThis!Share to TwitterShare to FacebookShare to Pinterest
Labels: 2020, Los Angeles, SF, US