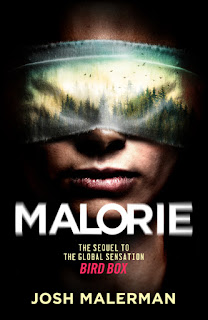 Malorie (Bird Box, 2)
Josh Malerman
Orion, 21 July 2020
Available as: HB, 291pp
Read as: Advance e-copy
ISBN: 9781409193159
I'm grateful to the publisher for an advance e-copy of Malorie via NetGalley.
Malorie is a sequel to Malerman's Birdbox. Birdbox has been made into a successful TV series. I haven't seen that, so if you haven't be warned, I may be inadvertently spoiling something for you! Though, if you haven't already read Birdbox, I think you should before you read Malorie or watch the series.
Malorie is set in the same world as Birdbox, a USA invaded by "creatures" seeing which sends the viewer into a frenzy leading them to kill others and then themselves. Wise people, "safe" people, live "by the fold" - swathing their eyes in cloth, never uncovering them or opening them unless they have explored their surroundings and are satisfied that no creature is present. People stay indoors, windows painted over, and distrust each other. For who knows who may have seen a creature?
The Malorie of the title is a young woman, who we saw previously navigate the new world, eventually to arrive at a school for the blind which provided her and her two kids a haven. The new book picks up this story six years later, and sees them forced to leave the school, setting up in an abandoned summer camp. Here, the horrors Malorie has experienced push her into a style of fierce, even over protective parenting. Tom, 16, and Olympia, 13 are bright children who have grown up in the new world. They understand the dangers, but they haven't faced the trauma Malorie has, of losing everything. Tom especially is restless and inventive and Malorie often has to tell him "no". Olympia - whose birth we saw in Birdbox - has her own secrets.
This is a short novel, and one I raced through over a couple of days. It's less about the practicalities of survival post-apocalypse than it is about the moral, psychological and cultural aspects. Malerman doesn't bother to explain where the food comes, from or precisely how it's possible for sighted people to survive while denying themselves that sense. More important is the sense of loss, of a world having been stolen away, the rage at the creatures that Malorie shows - but which she also feels at Gary, the man who broke up her previous sanctuary. Gary represents those who deny the threat posed by the creatures.
Reading all this during the time of covid  lockdown made the story come vividly alive for me. Everyone - everyone "safe" - is isolated, alone or in small groups, largely indoors. Contact with others is minimal, in case their sanity is compromised. Some wild people out there deny the situation, getting others into danger. And people wait - for what? For answers? For a solution (a vaccine?) Malerman can't have intended this but his timing seems impeccable.
Against this background, Malorie is very much a story about growing up, taking risks and letting go. Malorie the woman has sacrificed such a lot, been so hard on those kids and on herself, teaching them the lessons of survival she has learned so painfully herself. Of course they - or Tom at least - resent her (Olympia sees herself as a peacemaker between the other two). The story - essentially of how the sanctuary at camp Yadin ends and of what follows - is not hard to predict, but Malerman delivers it with such verve, such aplomb, that the pages blur past. Malorie, especially, comes out of those pages and speaks for herself: I felt such empathy with her, while also being appalled at much of what she is doing. Fixated on saving the "teens" from the creatures, she ignores or doesn't even imagine other problems and dangers: universal human problems, and very specific dangers. There were times when I was shouting to her, times when I was crying with her. It's that involving.
Tom and Olympia are also well drawn - over-confident, enthusiastic Tom, mature, self-controlled Olympia. Despite the weird circumstances they've grown up in and live in, Malerman makes them human, familiar, as growing teens and as people. You want to know more about them, you wish them the space to grow and flourish.
It's a superb book, carrying the story of Birdbox forward in new ways, supplying answers and hard lessons which are intimately built on what went before.
Strongly recommended.
For more information about Malorie, see the publisher's website here.
Email ThisBlogThis!Share to TwitterShare to FacebookShare to Pinterest
Labels: Birdbox, coming of age, Fantasy, post apocalyptic, US