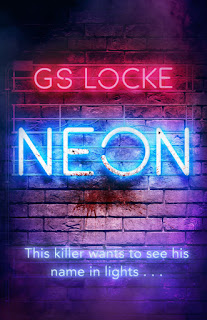 I'm grateful to Orion for an advance e-copy of Neon via NetGalley and for inviting me to take part in the Blogtour.

When my eyes were stabbed by the flash of a neon light
That split the night...

This is a unique, deeply atmospheric and unsettling exploration of the dark side of an English city, with a great sense of place. It also hangs very precisely on the relationships of its protagonists which remained with me long after I'd finished the book.

The Neon killer craves attention and recognition. His victims are found posed, arranged, surrounded by handmade, unique neon signs taunting victims, police, the public. How this was done - amidst the hubbub of a busy city - is just as much a mystery as why and as by whom. Fear at the killer, and anger at the police who can't catch him, simmer as the killings progress...

Neon has as its principle characters Jackson, the washed up detective who's failed so far and whose failure culminated in the murder of his wife, Iris, a young woman moving in Birmingham's underworld - and the killer himself. We see the killer's life and motivations, the book slowly and steadily unpeeling him, but much of the mystery is retained as it isn't clear till the very end how he fits with Iris and Jackson - although he's clearly fixated on the latter.

All three are delineated well, Locke choosing to come into the story midway. There have already been several murders, Jackson is already off the case, morosely haunting coffee shops and nursing thoughts of self-destruction. This means, despite the sequence of violent and grisly killings, we don't experience the successive discovery of each. That gives the book a sense of pace and avoids repetition as well as distancing the story from glorifying violence against women, a danger I think with the serial-killer genre. This last was something I thought about quite a lot when reading Neon. Do we really need more such stories? In this case, I think Locke brings something new and distinct.

Yes, there are killings of women. Yes, Jackson is, by the time we meet him, motivated by revenge (though also by guilt). But this is balanced by the portrayal of the killer and his motivations as rooted - ultimately - in misogyny. That's a creepy and gradual portrait, done with great skill and all the better for the restraint used. We never actually see any of the murders take place, only the aftermath - unlike Iris who we do see kill several times. She is an efficient and sought-after contract killer, a complicating factor when she and Jackson come into each others' orbit and find they have no choice but to work together.

The relationship that then develops is rich and complex, both Jackson and Iris being wounded, both putting up fronts and playing parts. They depend upon each for reasons that we only partly understand - not because the book is imperfect but because there are so many depths here and it is so painful for both of them to be exploring those depths that it can only happen bit by bit. I'll just say that Iris is much more than just a hitwoman and Jackson has much more driving him than revenge.

In fact that relationship is what I'll take away from this book, even more than its portrayal of a moody and threatening Birmingham, just outside the blazing lights of the busy shopping streets,  stations and public buildings.

And the people bowed and prayed
To the neon god they made...

You can buy neon from your local bookshop, or online from Hive Books (who support local shops), Blackwell's, Foyles, Waterstones, WH Smith or Amazon.
For more about this book, see the publisher's website here. And there are more stops on the tour - see the poster below for details! 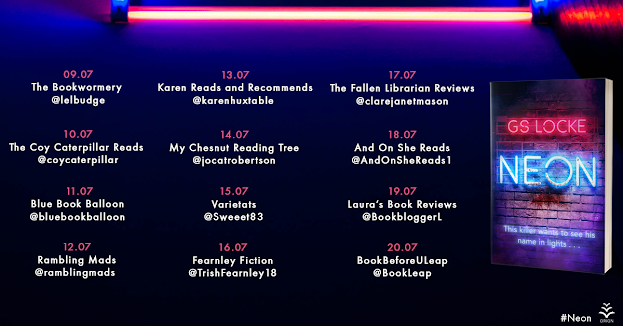