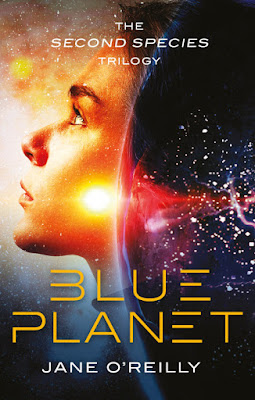 Blue Planet (Second Species, 3)
Jane O'Reilly
Piatkus, 16 July
Available as: PB, 343pp, e
Read as: PB
I'm grateful to the publisher for an advance copy of Blue Planet.
In this third volume of Jinnifer Blue's galaxy-spanning adventures, we're reunited with familiar characters from the previous books - principally Jinn herself and Dax, of course, still in their smouldering will-they, won't-they not-relationship, even after the events of Deep Blue - but also my favourite evil Sittan empress Talta (now sadly diminished, boo...), Bryant, and of course Eve.
A lot has happened in Blue Shift and Deep Blue and this isn't a trilogy where you should pick up Book Three first - for a start you'll be missing out on so much of that smouldering (the TENSION...) as well as cringing at Dax's antics in the last book (Jinn's too good for him!) I'm not going to give a recap of all that because you should have read it, but as this book opens, humanity, already battered by environmental disaster, as about to be subject to all-out war by Talta's ships. Despite being experimented on, enslaved and delivered to the enemy by her devious mother, Jinn's still standing up for the humans and seeking to warn them of the danger. Do you think anyone listens...?
Blue Planet is a clever, satisfying and exciting conclusion to the Second Species trilogy. Alternating between Jinn and Dax's adventures in deep space, Eve trying to find a cure for Bryant after afflicting him with a deadly toxin, Talta's increasingly unstable and fragile rule on Sittan, and Ferona (Jinn's mum) struggling on a dying Earth after losing her privileges and her high office, this story gives the answers we have been waiting for, allows some an opportunity for redemption (even if they then confirm how vile they really were) and settles that all-important smouldering.
O'Reilly keeps her story humming along - this isn't one of those final volumes that loses its way just tying everything up - and produces a few surprises (do I see a bit of a Brexity tone ion Earth's avowed isolationism as announced by a senior politician at one stage?) but in general tone it's very well aligned with the first two books: a dashing space opera that focuses on the characters, far from being hard science fiction but emotionally engaging and inventive and, above all, FUN! If you've been following the series you need to read this to complete the experience. If you're one of those people who wait till a trilogy is finished before you try (I know - weird) the be told: you, also, need to read this (as well as Blue Shift and Deep Blue).
Finally, there are heartfelt thanks from the author in her acknowledgements not only to the loyal readers and to those who helped make the book, but also to those providing the services which we, in difficult timers, all rely on - and a plea that they will be remembered as well when better times come. A plea we should all echo.
For more about the book, see the publisher's website here.
Email ThisBlogThis!Share to TwitterShare to FacebookShare to Pinterest
Labels: Romance-y, Second Species Trilogy, SF, Space opera