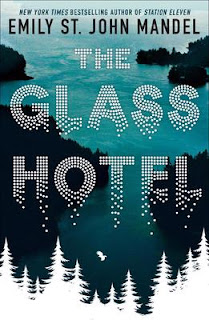 I really enjoyed this clever, absorbing book from Emily St John Mandel. More than enjoyed it - this is a book not just to read, but to drink, a book to immerse yourself in.

The Glass Hotel is bookended (slight pain intended, obviously) by two disappearances - in 1994, that of young Vincent's mother, when she sets out in her canoe one day from her home in a remote part of Vancouver Island and never returns - and in 2018, that of Vincent herself, falling from a containers ship off the coast of Mauritania. Both events are mysterious, both case a shadow.

Between the two deaths, St. John Mandel weaves a detailed and even intricate story, following not only Vincent's life but that of her addict half-brother, Paul, her future husband, financier Jonathan Alkaitis ('He carried himself with the tedious confidence of all people with money'), shipping executive Leon Prevant and many, many others. I particularly enjoy the way that she makes whichever character she is following so vivid, real and interesting - whether or not they are part of the main story. So for example, we hear about Alkaitis' artist older brother, Lucas, who died of an overdose decades before but was painted by Olivia in the Sixties. Olivia later invests her modest savings in one of Alkaitis's funds and acts, to a degree, as the personification of the many individuals who lose money this way. Yet beyond this, St. John Mandel gives us beautifully realised scenes of Olivia with Lucas, a passing encounter involving her and Vincent, and indeed a whole life in miniature for Olivia which makes her concrete and fascinating (and makes us care about what will become of her). Similarly, in St John Mandel's hands, anecdotes such as that involving Leon's wife Marie and her psychic friend, rather than detracting fro the pace of the novel or confusing the story, blaze with life and interest.

She does the same throughout the book - I particularly enjoyed reading about Walter ('There's such happiness in a successful escape') the night manager at the Hotel Caiette, the Glass Hotel, located in that same remote community where Vincent grew up. Walter's life before and after the central events of the story is given, and, like all of this book, it's riveting despite being - or because it is? - so ordinary. Walter has a small but pivotal role in the book because he is present on the night when a man (or woman) whose face is covered by a hoodie scrawls graffiti on the window of the hotel: 'Why don’t you swallow broken glass'. Is it a random act of vandalism or a targeted message? If a message, for whom?

That evening, the hotel will see several of the key playerss in this story. Paul is working there, as are Vincent, her schoolfriend Melissa and the recently widowed Alkaitis (Vincent will soon give up her job, after she meets Alkaitis). These meetings, and that message, resound through the book, seen by different characters and from different perspectives (Paul's conversation with his therapist decades later, Alkaitis's life in prison some years earlier, Vincent's future lives). The mystery of what it means, who did it and why hangs over the first part of the book: in time it seems to recede as we get up-close descriptions of subsequent events, and then at the end, we return to it with more knowledge.

Those alternate viewpoints are more than different individual perspectives. A great deal of the punch in this book comes from its exploring the different worlds that might be possible if this of that had happened differently. We're given an early glimpse of that through something terrible that Paul does and for which, it seems, he never truly feels any regret, except for the consequences to himself: there's always a sense with him after that that he is trying to live a life where that thing, and those consequences, never happened. (I didn't like Paul). Similarly, Jonathan Alkaitis accepts on one level that he has done wrong but still feels he shouldn't be punished and increasingly constructs a 'counter life', an alternate life, or lives, for himself, whether either he committed no crime, or didn't get caught, or fled in time, which over time becomes more and more real. Vincent finds her life with Jonathan so disorienting that 'she often found herself thinking about variations ion reality... she was struck sometimes by a truly unsettling sense that there were other versions of her life being lived without her, other Vincents engaged in different events'

Audaciously, St. John Mandel gives this sense of teeming other realities even more resonance by citing the events of her last book, Station Eleven. In The Glass Hotel, the 'Georgia Flu' is a thing but it has not become an existential threat. Imagine, one of our characters muses, if that happened? A reality in which 'the terrifying new swine flu in the Republic of Georgia hadn't been swiftly contained', in which it 'blossomed into an unstoppable pandemic and civilisation collapsed'.

That will not happen. We are given one vignette established to be twenty years or so in the future, and the world still has cocktail parties. Still, that whole world, those events, are implied in a moment - of course given even greater heft in our Covid-19 world which St John. Mandel couldn't have expected - all, for me, immediately making  this story richer, deeper. (Once you notice this, you begin to spot other allusions. For example, at a meeting of shipping executives the strategy is settled on of forming the 'Ghost Fleet' of unneeded freighters, at anchor off the cost of Malaysia, that also features in Station Eleven.)

In keeping with this openness to alternate viewpoints, alternate realities, the book speculates to itself about facts, rather in the manner of a court of law ('she was almost at the end of her shift when he walked in, which places the time of the meeting at somewhere around five or five thirty in the morning') with parts of it being given in the style of testimony. With Jonathan in prison, there has been a trial: at times he is giving his side of things to a journalist, at others the voice of the novel is a 'we' who speculated about events as well as giving a particular, self-serving viewpoint.

Related to the alternative viewpoints theme, another idea which is explored through the book is that of different worlds, overlapping (or not) occupied by different characters. Paul and Walter have both lived in Toronto but 'Paul's Toronto was younger, more anarchic, a Toronto that danced to the beat of music that Walter neither liked nor understood'. In Alkaitis's prison, these are referred to as 'cars' and there is one of people who will never be released, one of New Yorkers, and so forth. Elsewhere, we have the Kingdom of Money, which Vincent inhabits for a time, when she is with Alkaitis, and then has to leave. There is the Shadow Country, where the poor live - not just those with little or no money, but those who've cut adrift from the formal economy, travelling from seasonal job to season job in a recreational vehicle or hitching from truck-stop to truck-stop with the risks that entails. There are the ships' crews, people who have no permanent address on land anymore and, at the end of the book, there's Walter, living alone in the splendour of an empty hotel.

The hotel itself plays several roles in the story. Apart from bringing some of the main characters together, it represents, I think, a performance, a sort of con trick, that is repeated at different levels by different people through this book.The place makes no money. Built in a place so remote that it can only be reached by boat, it attracts the rich, those who want to experience the wilderness without its dangers or discomforts (again, overlapping worlds). It stands only so long as its owner, Alkaitis. He, in turn, stands only so long as everyone chooses to believe that he's not engaged in a massive financial fraud. It is, as one of his associates later claims, possible both to know something and not to know it at the same time. The hotel is both a massive white elephant and a much patronised and popular destination.

The writing in this book is simply gorgeous. St John Mandel has such an ability to convey character, whether it's an external perspective on someone we are seeing for the first time or a new wrinkle or quirk in a familiar figure revealed by an interaction (Vincent's decision, on meeting someone,  not to be 'one of those exhaustingly  mysterious people whom no one wants to talk to because they can't open their mouths without hinting at dark secrets that they can't quite bring themselves to reveal'). She has a knack for language and for the absurd or distinctive moments of life (a 'meeting that had outlived its natural lifespan but refused to die', someone 'disappearing into her phone', 'Harvey took the desk chair, Joelle sat ion the sofa, and they shredded evidence together. It was almost pleasant.') St John Mandel is also, in light of "recent events", right on the nose in so many places: '"There's something almost tedious about disaster," Miranda said. "...at first it's all dramatic... but then that keeps happening, it just keeps collapsing, and at a certain point..."'

I'd say this book has it all. It's so good I didn't want it to end, I just wanted to keep meeting these characters, exploring more realities, seeing them look backwards and forwards at what had been going on. I know I will return to it, because there is so much here.

Email ThisBlogThis!Share to TwitterShare to FacebookShare to Pinterest
Labels: 2020, Canada, fraud, maritime, US