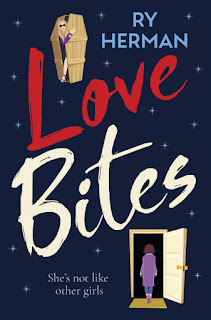 Love Bites
Ry Herman
Jo Fletcher Books, 9 July 2020
Available as: PB, 384pp, e
Read as: e-book via NetGalley
ISBN: 9781529406306
I'm grateful to Milly at Jo Fletcher books for an advance e-copy of Love Bites via NetGalley and for inviting me to take part in the Blog Blast.
CW: Love Bites, and so this review, includes themes of physical and emotional abuse and also suicide.
My review
Love Bites is an absorbing, modern romance novel that just happens to concern a vampire. In events set in and around Boston leading up to Christmas 1999 we see Chloë and Angela struggle with their pasts, with the ways they've been hurt, to imagine a future together.
Graduate astrophysics student Angela has escaped an abusive relationship with photographer Tess. Abusive, but formative: Tess very much shaped the person that Angela is, from her taste in clothes to her lifestyle. But Tess hurt Angela badly and Angela is concerned that she may inflict the same pain on others - if she gets too close. She may not be able to help herself. So she's wary when the pattern seems to be playing itself out again.
Publisher's reader Chloë has suffered from mental health problems. She is on medication, but sometimes harbours dark thoughts ('Gun, the thought enters her mind, unbidden. You could shoot yourself in the head. It'd be quick and simple.') Coming from a strictly religious background and having entered into a disastrous marriage, her self-esteem is often low. ('Cooking is too much of an effort, anyway. She's worthless.')
When the two women meet, it's bound to get complicated...
If that wasn't enough, Love Bites also introduces a (possibly) centuries old witch, who might play the role of fairy godmother here but then again she might just be talking rubbish, and an angel who seems to be branching out and setting up his own religion. We also see a lot of Chloë's workmate Shelley and her partner Mike - together the characters form a believable group (Herman has a knack of making the weird seem credible - maybe something to do with grounding the unbelievable in the dilemmas of everyday life - work, rent, relations with an ex, cat sitting) and in fact a very sympathetic one. The paranormal element is here but the meat and drink of the story (perhaps I should say the blood...) is relationships, not doomy overcoming-supernatural-evil. I enjoyed that.
I liked the notes that one character penned in seeking to understand her, totally inexplicable, staten of being. What are the limits now being a vampire? What can you safely do and not do? How many of the myths are true? Subjected to a scientific investigation, maybe there might be answers... or maybe just more frustration.
There is also some sharp writing here, from scene setting as our protagonists go about their daily lives ('Brookline is still sleepy, not yet hurrying along in the caffeinated press of rush hour', 'She is, after all, young and over-educated') to the intoxication of a new relationship ('She's young and in love and dancing') to some very tender sex scenes (not going to quote) to the sadness of a chilly family (Chloë's parents, whose main reaction to her attempted suicide is irritation that have to pay for the ambulance). It also has a great, if chilling, exposition of the progress of an abusive relationship leading up to 'And then, once day, when she slaps you...'
There's a lot of fear here, and guilt, and a hope to be better but honest doubt whether you can be and whether it is fair, or just demanding, to seek forgiveness. And risk and trust and the potential, perhaps for new starts, not knowing all the answers but seeking honestly to find them. It's funny in places ('It gives him the vague impression that he's a member of a depressed drum-and-bugle corps. Sergeant Pepper's Lonely Goth Club Band') but can turn poignant in a flash ('Sweat is already soaking the ridiculously impractical waist cinched dress Tess is having her wear today', 'She can't spend her life not trusting anybody').
It's a heady mix and a book I greatly enjoyed. Do try it. (It would also, I think, make a great Christmas present for just the right person...)
About the Author
Born in the US, Ry Herman is now a permanent Scottish resident, and has been writing theatrical plays for most of his life. He's worked at a variety of jobs, including submissions editor, theatre technician, and one job which could best be described as typing the number five all day long. He acts and directs and performed at the Edinburgh Fringe Festival in 2019. He is bisexual and genderqueer. Hobbies include baking bread, playing tabletop roleplaying games, and reading as many books as humanly possible. Ry is based in Edinburgh.
You can buy Love Bites from your local bookshop or online from Hive Books, who support local bookshops, Blackwell's, Foyles, Waterstones or Amazon.
For more information about the book, see the publisher's website here.