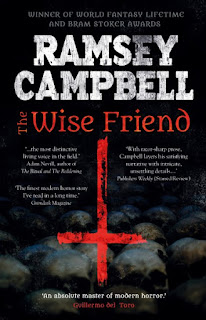 I'm grateful to the publisher for an advance copy of The Wise Friend to consider for review.

Goodmanswood - fallen leaves make face. "You must turn the world over to reveal its truth".

This creepy modern horror novel is set in the North West of England and focussed particularly on the city of Liverpool and across the river, the town of New Brighton.

When I was a small child, we often used to visit relatives in New Brighton and nearby Wallasey and I became familiar with the (then) rather tawdry, decayed seafront and shabby funfair behind. While a perfectly normal setting there was a feeling of edginess there and I can imagine that looked at in the right - or perhaps wrong - way it could transform in a moment into something creepy. Looking at the world in just that way and letting it transform is something Campbell does deftly in The Wise Friend - and something that his protagonist, Patrick Semple, comes to dread.

Darkmarsh - tussocks crawl together. "The power of the swamp restores mutability to the world."

Semple, an English lecturer, has a complex relationship with the memory of his aunt Thelma whose late works reveal an obsession with the secrets of landscape and place - an obsession that trod the threshold of the eerie, or even of the occult. In the days following her funeral, he begins to investigate her inspiration, and the places she visited before her untimely death.

But this isn't just Semple's quest. His teenage son, Roy, is drawn in too, activating a tension between Patrick and his ex wife Julia. Campbell animates this conflict brilliantly through the awkward conversations between Patrick and Julia, which all carry a subtext of wrongness. It's as though the words, rather than establishing understanding or sympathy, are erecting barrier, weaving mazes, which leave Patrick and Julia (and Roy and his girlfriend Bella) more and more at odds.

Halfway Halt - trees reach for walkers in railway cutting. "Where man cracks the earth, beware the hatching of the egg."

This book is short on classic supernaturalism - the crypt at midnight, the desolate churchyard - and long on the ordinarily ominous, the decaying tower block that seems to draw grey skies, the shuttered hotel whose guestbook is curiously active, the restless trees in what is supposed to be a little wood but which just seems to go on and on. The last put me in mind of Algernon Blackwood or Arthur Machen - a sense of otherness that exists on a different axis to the good vs evil of much horror fiction, a sense of powers (and possibly, principalities and thrones) with which one ought not to become entangled in the same way that one ought not to become entangled with high voltage cables or unshielded machinery.

Much of the unease here is implied, laid on subtly through distorted messages heard from the nearby station, whispered on the wind in a remote valley or gusted round the graffitied pillars under a motorway junction. Or built on those family tensions - which seem to run in Patrick's family. Yes this is a horror book so one can justifiably expect that "things" will happen - but they're much better (much worse...) implied, circled round, eased into, as here.

I thoroughly enjoyed the rising unease of this book, the real scares that built to its careful conclusion and the sense of a pattern, a trap, that Campbell is constructing here. A truly unsettling read and for me, even more so for my experiencing it on a sunny day as the trees shifted softly in the breeze.