#Blogtour #Review - The Book of Koli by MR Carey 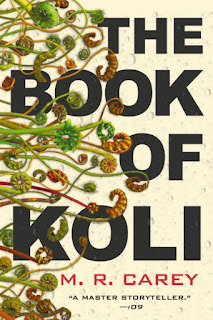 I'm so glad today to be joining the blog tour for The Book of Koli by MR Carey and am grateful to Orbit for an advance copy and to Tracy Fenton at Compulsive Readers for inviting to take part.

This was never a book I wasn't going to read. Carey's books - especially those set in the world of The Girl with all the Gifts, and the haunting Someone Like Me - are immersive, readable and remain with you.

But it did add a little frisson to see that in his latest, we are dealing with a world where Nature has, as it were, taken its revenge. It's easy to see that right now, I think. And the post-apocalyptic feels relevant in a way that it can't have when this was being written.

Not that our present pandemic is going to see us reduced, like Koli here, to scattered communities living on subsistence agriculture and bits of scavenged, ill-understood tech. But we can perhaps see how dependent our society is on everything working together, and how fragile it all might be.

In narrator Koli's (a young man living in remote Mythen Rood, in the North of England, perhaps a hun dared year from now) world, Nature is the enemy. Everything is trying to kill us. The very trees are hostile, as are a host of fierce creatures - wasps the size of a human head, "needles" that will take your arm off, floating seeds that will take root in your flesh. There are also dangerous remnants of human tech - attach droids gone feral, for example. And there are other people - the Shunned Men who have taken to cannibalism, and various messianic sects. It's a cruel and hard world outside the village stockade and not a place you'd willingly go, except for short hunting tripos, but it's where Koli went and, apparently, came back from.

Telling this journey over three books, Carey takes his time in the first to establish the setting, the history and the language. Koli and his village speak a very distinct variety of English and in places the reader has to work a bit too understand, especially, the names and some of the references but this speech adds greatly to the atmosphere and helps one believe that, yes, here is a future community.

The language also adds a hint of comedy when Koli stumbles on a piece of working tech - a media player hosting an avatar who speaks in a hip dialect (well, hip a long time before Koli was born) of English-Japanese-teen. Seeing him trying to communicate with an AI that uses this language, when his world and his references Arte so narrow and, well, different - is quite funny, but also rather sad, underlining what humanity has lost.

Against this larger theme, though, much of what Koli does and what happens to him in this book flows from basic human motivations - love, jealousy, desire to be someone - which an adolescent boy in a hardscrabble place like Mythen Rood feels just as much as anyone else. Carey tells a story that, well, just works, at this elemental human level so that for the greater part of this book the reader just wants Koli safe, wants him not to take the catastrophic course of action he does here - rather than caring about that wider world, the causes of the collapse, and what might be done now to put things right. Carey only leads us up to that slowly and by the time he does we really care about Koli and his world, its people, even its AIs like Monono.

In feeling and content the book reminded me of John Wyndham's The Chrysalids, particularly in the way that the future world, apart form being post-apocalyptic, turns out to be flawed even in its one terms. I'm sure comparisons with Riddley Walker are also inevitable, especially given Koli's dialect (although I found this perfectly accessible) and the composite religion that has emerged. No doubt other parallels can be drawn but really, Carey makes this setting and own, peopling it with credible characters who have credible motivations and addressing many other themes than "how to survive societal collapse". There are trans characters here. There is misuse of power. The ethical implicates of AI is an issue. And there is that fundamental question - when is is permissible to kill?

If that makes the book sound too solemn and ideas-y, it's really not. This is an absorbing and involving story with plenty of action and a thinking, three dimensional protagonist who you may want to slap at times but who will quickly find his way into your heart.

I'm so glad that The Trials of Koli and The Fall of Koli (ooooh...)  are coming later this year because I for one would not like to have to wait a whole year to see what happens next - and how the story finishes.

One to grab and read quickly, I think!

The tour continues with many great stops got come - see the poster below for details. 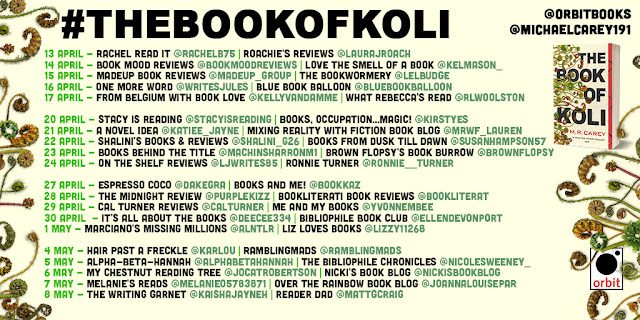 For more information about The Book of Koli, see the Orbit website here.

You may, in spite of These Strange Times, be able to get the book from local shop - if you can, please do, because they needs your support as ever before. Alternative you can go online to Blackwell's, Foyles, Waterstones or Amazon.